David Michael Letterman, popularly known as David Letterman, is an American television host who has served the longest period hosting a late night talk show in the history of American television. Starting with the first episode of ‘Late Night with David Letterman’ on February 1, 1982 on NBC, he had hosted a late night television talk show for 33 years, until 2015. David Letterman was ranked 45th on the TV Guide's 50 Greatest TV Stars of All Time. Also a comedian and television and film producer, he opened his own company, Worldwide Pants, that produced some of his shows and several prime-time comedies like ‘Everybody Loves Raymond’ and ‘The Late Late Show with Craig Ferguson’. Known for his “disrespectful” sense of humor, Letterman left NBC when the channel chose Jay Leno to replace Johnny Carson instead of him as the host of ‘The Tonight Show’. He then joined CBS and started hosting ‘The Late Show with David Letterman’ which directly competed for viewership with ‘The Tonight Show with Jay Leno’. In 2015, he announced his plans to retire from the show. A few years later, he returned in a new talk show series, which was premiered on Netflix in January 2018. Khloé Kardashian
12th April In History
DID WE MISS SOMEONE?
CLICK HERE AND TELL US
WE'LL MAKE SURE
THEY'RE HERE A.S.A.P
Quick Facts

American People
Talk Show Hosts
American Men
Tall Celebrities
Tall Male Celebrities
Childhood & Early Life
David Letterman was born on April 12, 1947 in Indianapolis, Indiana, to father Harry Joseph Letterman, who was a florist, and mother Dorothy Marie Letterman Mengering, who was a secretary for the Second Presbyterian Church of Indianapolis. He has a sister.
He stayed close to the Indianapolis Motor Speedway and was fond of collecting model cars. While growing up, he admired his father's skills to entertain people with jokes and make a party lively. His father suffered a heart attack when David was a young boy. He eventually died of a second heart attack at the age of 57.
He attended the Broad Ripple High School and worked at the local Atlas Supermarket. He studied radio and television at the Ball State University, in Muncie, Indiana, and graduated in 1969. He completed a four-year double major in journalism news/telecommunications.
David was the announcer and newscaster at the college's student-run radio station—WBST. However, he was fired because he treated classical music with disrespect. He then founded another campus station—WAGO-AM 570. 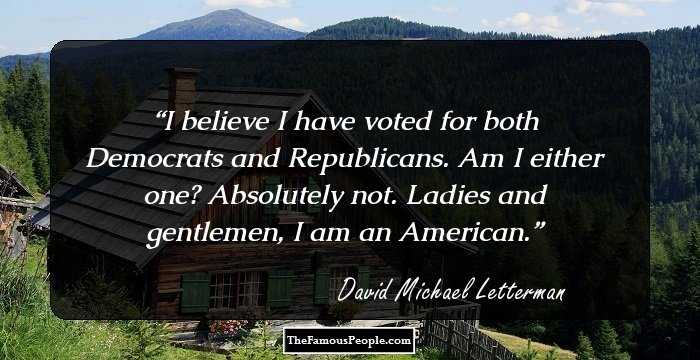 Continue Reading Below
Career
David Letterman started his career as the host of a radio talk show on WNTS (AM), and as an anchor and weatherman on Indianapolis television station WLWI. In 1971, he was a pit road reporter for ABC Sports' Indianapolis 500.
In 1975, he moved to Los Angeles to become a comedy writer, and began performing at a comedy club called The Comedy Store. He joined American actor and comedian Jimmie Walker’s group of comedians to write jokes for his stand-up acts. He also wrote material for popular shows like ‘Good Times’.
In 1977, he became a regular writer on the six-week series ‘The Starland Vocal Band Show’, aired on CBS. In 1978, he became a cast member on Mary Tyler Moore's variety show, ‘Mary’. Finally, he landed at ‘The Tonight Show Starring Johnny Carson’, and soon became a regular guest on the show.
In June 1980, he bagged his first morning comedy show on NBC, called the ‘The David Letterman Show’. Although it was critically successful, it failed to get good ratings, and was eventually canceled in October 1980.
He then started hosting the show ‘Late Night with David Letterman’ in February 1982 at NBC. His fans loved his self-mockery and cynical sense of humor. Later, his style inspired numerous comedy talk shows.
In 1992, when Johnny Carson retired, David Letterman expected that he would be offered Carson’s position at ‘The Tonight Show’. But instead, NBC offered the role to Jay Leno. As a result, David left NBC and joined CBS to host his own late night show, in direct completion to ‘The Tonight Show.’ His new show was called the ‘Late Show with David Letterman’ and started airing in August 1993.
Although David Letterman retained his unique sense of humor, this show was not an exact replica of his old NBC show. From 1993 to 2009, David Letterman was ranked higher than Leno 12 times in the annual Harris Poll of Nation's Favorite TV Personality. In 2003 and 2004, Letterman’s show ranked second, just behind Oprah Winfrey, and that year, Leno’s show was ranked fifth. However, Leno’s show was ranked higher than David’s show during 2007 and 2008.
In March 2002, as his contract with CBS was about to expire, ABC offered him a show, which he was keen to accept. But on December 4, 2006, CBS announced that Letterman had signed a new contract to host the ‘Late Show with David Letterman’ till 2010.
In April 2012, CBS announced that Letterman’s contract had been extended till 2015. About 13.76 million viewers in the United States watched the final episode of his show which ended on May 20, 2015.
Continue Reading Below
In 2016, he joined a climate change documentary show ‘Years of Living Dangerously’ as one of the show's celebrity guests. In 2017, he and Alec Baldwin co-hosted ‘The Essentials on Turner Classic Movies’.
In 2018, he started hosting a six-episode series—‘My Next Guest Needs No Introduction with David Letterman’—on Netflix. The first episode on January 12, 2018, featured Barack Obama. 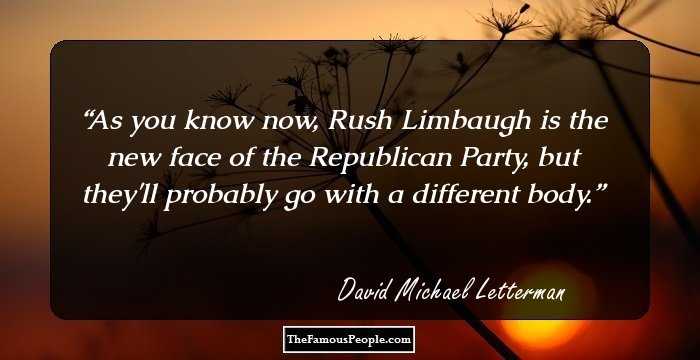 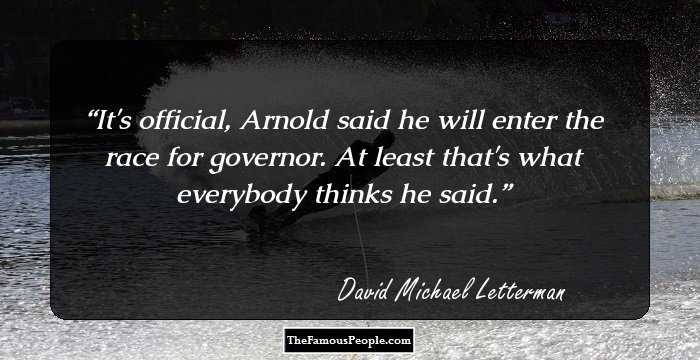 Quotes: Will
Personal Life
On July 2, 1968, David Letterman married his college girlfriend, Michelle Cook. They divorced in October 1977. From 1978 to 1988, he was in a live-in relationship with Merrill Markoe, former head writer and producer of ‘Late Night’.
While still in the live-in relationship, he started dating Regina Lasko in February 1986. He also has a son, Harry Joseph Letterman, with her. Harry was born on November 3, 2003. David married Lasko on March 19, 2009.
Letterman suffers from tinnitus (ringing in the ears). Once an alcoholic, he no longer drinks alcohol. He started drinking at the age of 13. He later became sober with the help of transcendental meditation and low doses of medication.
In May 1988, Margaret Mary Ray, a woman who suffered from schizophrenia, stalked him. She stole his car and broke into his house several times. She committed suicide in October 1998.
Robert J. ‘Joe’ Halderman, producer of the CBS crime series ‘48 Hours’, once blackmailed Letterman, threatening to disclose that he had had sex with several of his female employees. The blackmailer was finally arrested and served a six-month jail sentence, followed by probation and community service.
A routine check-up on January 14, 2000 revealed that an artery in Letterman’s heart was severely blocked. He was immediately rushed to emergency surgery for a quintuple bypass.
David Letterman had funded the journalism school at Ball State University. He owns an extensive collection of cars. In 2012, he owned ten Ferraris, eight Porsches, four Austin Healeys, two Honda motorcycles, one Chevy, one Mercedes-Benz, one Jaguar, an MG, a Volvo and a Pontiac. According to Forbes, in 2015, his estimated annual income was $35 million.

Quotes By David Letterman | Quote Of The Day | Top 100 Quotes

See the events in life of David Letterman in Chronological Order