(Best Known as the Host of the Late-Night Talk-Show ‘Jimmy Kimmel Live!’)

Quick-witted, amusing and down to earth, Jimmy Kimmel is one of the wealthiest and most successful American talk show hosts. With an estimated net worth of $35 million, he earns an aggregate of $8 million a year for his talk-show ‘Jimmy Kimmel Live!’ alone. He started out as a radio jockey and appeared as the popular ‘Jimmy the Sports Guy’ in the Los Angles based radio show ‘The Kevin and Bean Show’. Soon after, he bagged the Daytime Emmy Award for his sharp-edged humour as the co-host of the game show ‘Win Ben Stein's Money’. He reached the highpoint of his career and achieved great success in the field of late-night talk shows with his hit show ‘Jimmy Kimmel Live!’ It soon became one of the longest running late night talk shows in the History of ABC network, breaking all records of other talk shows. This established his status as one of the most popular and favourite personalities on American television. He is currently riding a wave of popularity and his new show ‘shock-talk’ has tapped quite a few audiences. Katie Kimmel
DID WE MISS SOMEONE?
CLICK HERE AND TELL US
WE'LL MAKE SURE
THEY'RE HERE A.S.A.P
Quick Facts 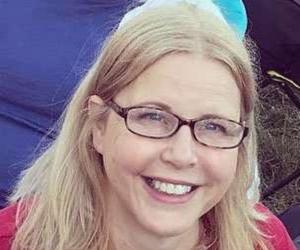 American People
American Men
Tall Celebrities
Tall Male Celebrities
Male Media Personalities
Childhood & Early Life
Jimmy Kimmel was born in the middle class neighborhood of Mill Basin in Brooklyn, New York, to James Kimmel, an executive with IBM and Joan Kimmel, a dedicated homemaker.
He was born and raised a Roman Catholic and served as an altar boy at the church as a child.
When he was nine years old, his family moved to Las Vegas, Nevada, where he attended the Ed W. Clark High School. In high school, he was an excellent student.
He later attended the University of Nevada for one year and it was during this period that he discovered his passion for radio. 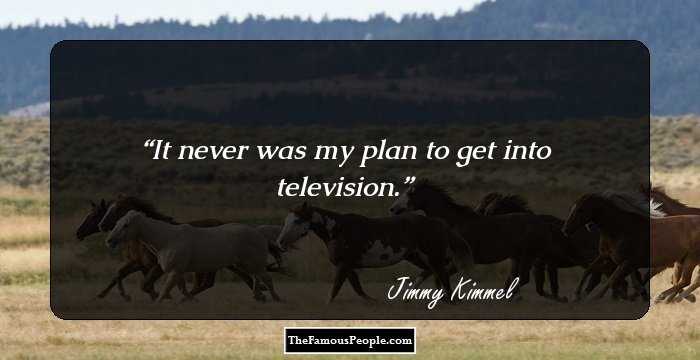 Quotes: Never
Continue Reading Below
Career
In 1989, he got his first job in the Seattle based radio station, ‘KZOK-FM’, as the co-host for the show ‘The Me And Him Show’. However, he was fired within two months, after which he started his own radio show in Palm Springs, California.
In Los Angles, he worked with the radio station ‘KROQ’, where he hosted ‘The Kevin and Bean Show’ as the popular ‘Jimmy the Sports Guy’.
In 1996, he was seen on Fox Network promos, where he made an appearance as ‘Jimmy the fox guy’.
He has made a number of appearances on talk shows such as Live with Regis and Kelly, The Howard Stern Show, The Ellen DeGeneres Show, and the Late Show with David Letterman.
In 1997, he appeared on television as a co-host of the game show ‘Win Ben Stein's Money’ that was broadcast on the Comedy Central Network. His witty remarks and unique performing style struck a chord with TV viewers.
In 1999, he co-hosted Comedy Central’s ‘The Man Show’ along with Adam Corolla, an American TV personality, comedian and radio show host.
In 2000, he was the voice of ‘Corky’, a talking dog in the American comedy film ‘Road Trip’, directed and written by Todd Phillips.
In 2001, he played the role of ‘Deaths Dog’ in the ‘Mr. Saturday Knight’, the ninth episode from the third season of ‘Family Guy’.
In 2003, he began to host his own late-night talk show, ‘Jimmy Kimmel Live!’ on ABC network. The show was also broadcast on the Irish digital TV channel ‘3e’.
Continue Reading Below
In 2004, he lent his voice as ‘Spanky’ in ‘Garfield: The Movie’, an American live-action film directed by Peter Hewitt.
In 2010, he appeared on a video game commercial titled ‘Call of Duty: Black Ops’. In the video he was seen firing and dodging bullets.
In 2012, he hosted the White House Correspondents' Dinner in Washington, D.C. where during the closing ceremony he made a set of funny remarks referring to his school history teacher.
On September 23, 2012, he hosted The 64th Annual Primetime Emmy Awards which was held at the Nokia Theatre in Downtown Los Angeles, California. 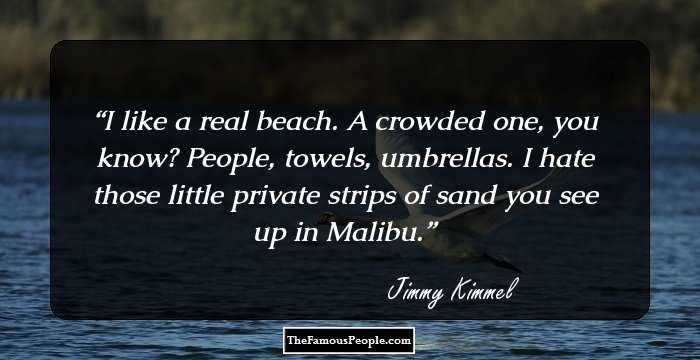 Major Works
The game show ‘Win Ben Stein's Money’ has won five Daytime Emmy Awards and the hosts of the show shared the Emmy Award in the category, ‘Outstanding game Show Host’ in 1999.
His successful talk show ‘Jimmy Kimmel Live!’ has aired for a total of 1,826 episodes as of 2012, making it the longest running late-night talk show in the history of ABC Network.
Awards & Achievements
In 1999, he was the recipient of the Daytime Emmy Award as ‘Outstanding Game Show Host’ along with Ben Stein for the show ‘Win Ben Stein's Money’.
In 2013, he was featured on Time Magazine’s list of ‘100 Most Influential People in the World’.
Continue Reading Below
In 2013, he received a star on the Hollywood Walk of Fame. 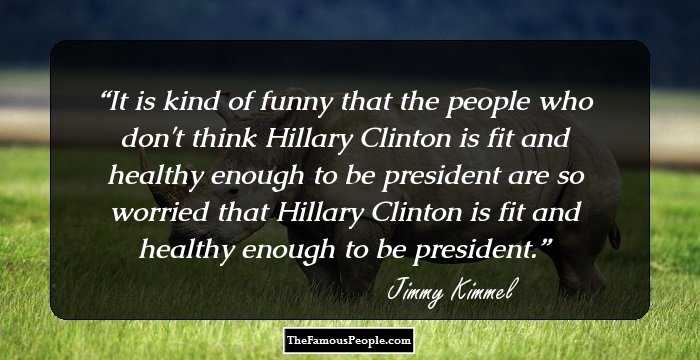 Quotes: Think
Personal Life & Legacy
In June of 1988, he married his long-time girlfriend Gina and the couple had two children together. The couple split in 2002.
After his separation from Gina, he was romantically involved with Sarah Silverman, American actress and writer. The couple broke-up in early 2009.
In October 2009, he started dating Molly McNearney, a co-head writer for ‘Jimmy Kimmel Live’. The couple got engaged in 2012.
He has been suffering from Narcolepsy, a neurological disorder due to which the body fails to regulate sleep-wake cycles.
He plays the bass clarinet, a musical instrument of the clarinet family and showcased his talent at the ‘The Mighty Mighty Bosstones’ concert in Costa Mesa, California.
Trivia
This acclaimed American talk-show host broke the Guinness world record for the most miles flown over five working days in a week, with 30,000-plus miles back and forth between New York and California in order to host two television shows.

Quotes By Jimmy Kimmel | Quote Of The Day | Top 100 Quotes

See the events in life of Jimmy Kimmel in Chronological Order