(One of the Greatest Filmmakers in Cinematic History)

Stanley Kubrick, considered to be one of the greatest filmmakers in American history, was a director and producer known for his innovation in cinematography. A highly creative personality, he worked in a number of genres ranging from romance and crime to horror and science fiction. His interest in films stems from his childhood when he used to skip classes to watch movies. He was an intelligent boy, but had no passion for academic pursuits; in fact his high school grades were so low that he could not get into a decent college! He began his career as a photographer and learnt the aspects of cinematography and film production. He directed his first film at the age of 23—it was a short documentary about boxer Walter Cartier. Filmmaking intrigued the young Stanley and he tried to learn all he could about the art. He made his initial films on a shoestring budget, but his fate took a turn for the better with the release of ‘Spartacus.’ The film became a smash hit and established Kubrick as a major director. He was fond of innovation; many of his films are credited for introducing new elements to cinematography. He was not someone who shied away from controversy—artistic expression was all he cared about, which is evident from the range of topics he chose to film. Sylvester Stallone
26th July In History
DID WE MISS SOMEONE?
CLICK HERE AND TELL US
WE'LL MAKE SURE
THEY'RE HERE A.S.A.P
Quick Facts

American Celebrities
Directors
Screenwriters
T V & Movie Producers
American Men
Childhood & Early Life
Stanley Kubrick was born on July 26, 1928, in New York, to Jacques Kubrick and Sadie Gertrude. His father was a well-to-do doctor and Stanley had a comfortable upbringing.
His father bought him a camera when he was 13, instilling in him a lifelong fascination for photography. He was also good at playing chess.
Despite being intelligent he did not do well in school and often skipped classes. He attended ‘William Howard Taft High School’ and graduated in 1945.
Because of his poor grades, he could not secure admission in a good college, and began attending evening classes at the ‘City College of New York’ in 1946. 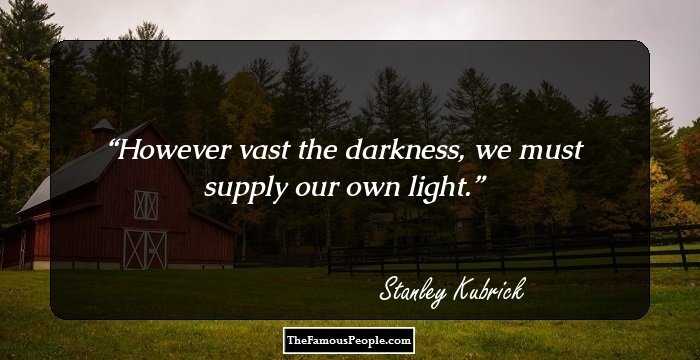 Continue Reading Below
Career
He was a talented photographer, and had sold a series of photographs to ‘Look’ magazine when he was in high school. He found employment as an apprentice photographer for the same magazine and later got promoted as a full-time staff photographer.
During this time, he also became increasingly interested in the science and art of filmmaking and frequented film screenings. He was particularly inspired by Max Ophuls’ and Elia Kazan’s style of filmmaking.
In 1951, he directed his first movie ‘Day of the Fight,’ a short documentary based on the life of Walter Cartier. He made the film on a shoestring budget.
He quit his job at ‘Look’ magazine and began to focus on filmmaking. His second movie ‘Flying Padre’ (1951) was a nine-minute long documentary based on the life of a Catholic priest.
He shot his first color film ‘The Seafarers’ in 1953. In the film, he used a sideways-shooting dolly shot which would become one of the signature techniques he would later use in feature films.
He made three more movies during the decade: ‘Killer’s Kiss’ (1955), ‘The Killing’ (1956), and ‘Paths of Glory’ (1957).
He got a big break with his 1960 movie ‘Spartacus’ which was based on a novel of the same name. It was his first movie to become a huge critical as well as commercial success. However, Kubrick complained that he did not have complete artistic control over the film as he would have wished.
In 1962, he made the highly controversial ‘Lolita,’ adapted from Vladimir Nabokov’s novel of the same name. He treated the erotic subject matter of the novel in a sensible manner to create black comedy.
‘Dr. Strangelove,’ the 1964 black comedy by Kubrick, was a political satire, starring Peter Sellers and George Scott. The movie was a big hit at the box office.
Continue Reading Below
He co-wrote the screenplay of ‘2001: A Space Odyssey’ with Arthur C. Clarke, and produced the film in 1968. The film was made mostly in England and is known for its innovative musical effects.
Kubrick’s films were expressions of his artistic tendencies. His 1971 film ‘A Clockwork Orange,’ with its violent and disturbing imagery, provoked many controversies. He was criticized for the explicit content of the film, though he was also nominated for various awards.
After a gap of four years, he returned to filmmaking with ‘Barry Lyndon’ in 1975. The film revolved around the adventures of a fictional 18th century explorer.
Kubrick was never a prolific producer. He made only two movies during the 1980s: the psychological horror ‘The Shining’ (1980) and war film ‘Full Metal Jacket’ (1987).
His last film was ‘Eyes Wide Shut’ (1999), a story which revolves around the sexual adventures of a young couple. The film had Tom Cruise in the lead role and was well received by the audience. 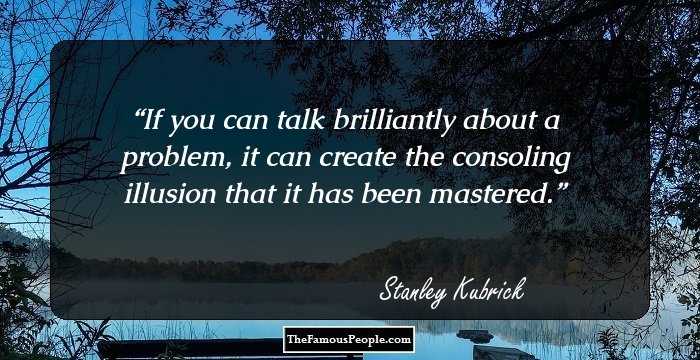 Quotes: You
Major Works
The 1964 dark comedy film ‘Dr. Strangelove,’ which he co-wrote, directed, and produced, was one of his biggest successes. The movie, which was ranked by the critics as one of the greatest films of all time, was nominated for four ‘Academy Awards.’
His film ‘2001: A Space Odyssey’ (1968) was a science fiction dealing with extraterrestrial life and artificial intelligence. The film garnered a cult following and was also a critical as well as a commercial success.
‘Barry Lyndon’ (1975), starring Ryan O’Neal and Marisa Berenson, is considered to be one of Kubrick’s finest films. The movie won four ‘Academy Awards’ and was appreciated for the unconventional usage of lighting in cinematography.
Continue Reading Below
Awards & Achievements
He won the ‘Locarno International Film Festival Prize’ for ‘Best Director’ for his film ‘Killer’s Kiss’ in 1955.
He was awarded the ‘Golden Globe: Best Drama Picture’ for the film ‘Spartacus’ in 1960.
He won two awards for ‘Best Director’ for his 1964 film ‘Dr. Strangelove.’ He won the awards at the ‘New York Film Critics Circle’ and the ‘Italian National Syndicate of Film Journalists.’
For his film ‘2001: A Space Odyssey,’ he was given the ‘Academy Award’ for ‘Best Visual Effects’ in 1968. 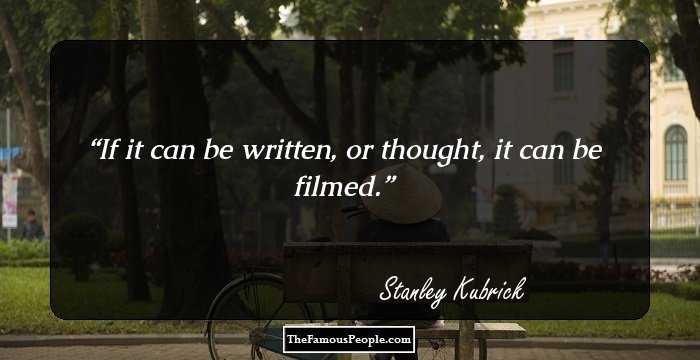 Personal Life & Legacy
He married his high school sweetheart Toba Metz in 1948. But the marriage did not flourish and the couple divorced three years later.
His second marriage was to dancer Ruth Sobotka in 1955. This marriage too ended in divorce.
He met German actress and artist Christiane Harlan when the two worked together for a film. The couple entered wedlock in 1958 and had two daughters. They had a happy marriage that lasted till Kubrick’s death.
He died in his sleep on 7 March 1999, aged 70.
Trivia
Alan Conway, a travel agent, impersonated him during the 1990s, fooling many people into believing that he was the celebrated director.
Steven Spielberg’s 2001 film ‘A.I: Artificial Intelligence’ is dedicated to him.
Most of his movies were adapted from short stories or novels.

Quotes By Stanley Kubrick | Quote Of The Day | Top 100 Quotes

See the events in life of Stanley Kubrick in Chronological Order