Sherwood Anderson was an American short story writer and novelist who made a mark in the American literary circle with his subjective and self-revealing work. Born in an affluent family, young Anderson faced financial crisis after his father lost his job. As such, he took up odd jobs to make ends meet. It was during this time that his trait as a salesman developed. He completed his education and served in an advertisement firm as a salesman where he gained a name and a reputation for himself. He quit the same to take up an important post at United Factories Company but did not remain in it for long as well. Following a nervous breakdown or what he stated as a conscious effort to free himself from the materialistic world, he jumped to pursue a literary career. Excepting for his first two write-ups, which he considered apprentice novels, he came up with brilliant works each of which established his reputation as a noteworthy writer. He wrote extensively in the latter half of his life, covering various genres of writing such as novels, short story, play, poetry, drama, non-fiction and so on. Furthermore, he created an influential effect on the next generation of young writers such as William Faulkner, Ernest Hemingway, Thomas Wolfe and others. American Celebrities
Short Story Writers
American Men
Male Writers
Virgo Writers
Childhood & Early Life
Sherwood Berton Anderson was born to Irwin McLain and Emma Jane Anderson on September 13, 1876 in Camden, Ohio. He was the third of the seven children born to the couple. His father was a former Union soldier and harness-maker.
Just a few days before turning one, young Anderson along with his family relocated to Caledonia. However, their stay in the town was short-lived. Despite being financially sound, the family got mired in monetary problems mainly due to his father’s drinking habit.
After brief stays in various cities, the family finally settled in Clyde, where senior Anderson found job on and off. As such, young Anderson took up various odd jobs to financially support and assist his family.
Though academically good, financial troubles prematurely ended his education and after nine months at high school, he left studies. However, he did not give up on reading, and was a voracious reader. 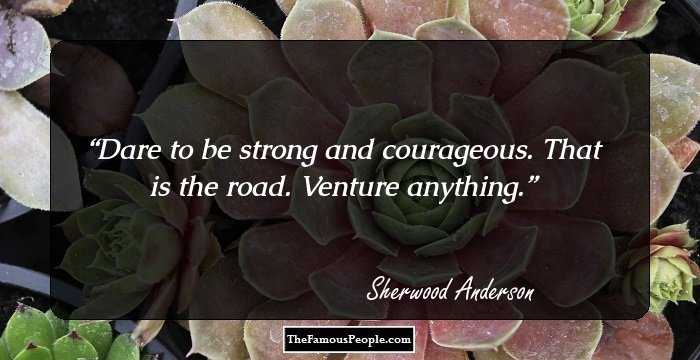 The Hottest Male Celebrities With The Best Abs
Career
It was during his early years that he developed a knack for selling stuffs while performing odd jobs, a trait which assisted him when he took up advertising in his later years.
Tragedy struck the family as his mother passed away in 1895. Following year, he left for Chicago where he found job at a cold-storage plant. He resumed his studies by enrolling for the night classes at Lewis Institute.
With America entering Spanish-America War, he was drafted into the army. He was popular amongst his army comrades. Following the end of war, he moved back to Clyde.
After a short stay at Clyde, he enrolled at the Wittenberg University, Springfield in 1899. Following year, he graduated with flying colors. He was one of the chosen few who were to give commencement speech.
Interestingly, at Springfield, he stayed at a boarding house which accommodated several businessmen, educators and creative artists. Two people who played a dominant influence on his life therein were Harry Simmons and Trillena White. The former was so impressed with his speech that he offered him a job as a advertisement solicitor at Mast, Crowell, and Kirkpatrick’s Chicago office.
In 1900, he returned to Chicago and made his way to the white-collared profession. However, monotonous routine lifestyle and arguments with his boss led to a premature exit from the company.
In 1901, he moved to the Frank B. White Advertising Company where he was employed until 1906. His profile included selling ads and writing advertising copy for manufacturers of farming implements and articles for the trade journal, Agricultural Advertising.
It was his contribution in the trade journal that sparked his interest in writing. His first professional publication was the February 1902 piece called ‘The Farmer Wears Clothes’. He came up with 29 articles and essays for his company's magazine, and two for a small literary magazine published by the Bobbs-Merrill Company called The Reader.
In 1906, he left for Cleveland, wherein he took up the post of the President for United Factories Company. His profile was mainly that of a sales manager. Things took a strenuous turn for him when a large batch of incubators turned defective. He suffered from a nervous breakdown in 1907 and subsequently left the company.
Continue Reading Below
He moved to Elyria, Ohio, where he founded his own small mail-order business, Anderson Manufacturing Company. Luckily, the business thrived and within a matter of time, it expanded considerably absorbing several other similar businesses and expanding the line of products. He merged his company into American Merchants Company.
It was while he was enjoying much financial success with his business thriving extremely well that his health complications erupted. He suffered from a major nervous breakdown that some reports claimed to have been amnesia or lost identity crisis.
He took up a job as a copywriter at the Taylor Critchfield Advertising Company in Chicago. Furthermore, he joined the so-called Chicago Group, which included such writers as Theodore Dreiser and Carl Sandburg.
During this time, he came up with his debut novel titled ‘Windy McPherson’s Son’ which was published in 1916. The book was a part of the three-book deal that he had made with John Lane.
Following year, he came up with his second piece of work, ‘Marching Men’. It was later that he stated that his first two works were raw and immature or apprentice novels that served as the foundation for an illustrious career in writing.
Interestingly, his first two novels, ‘Windy McPherson’s Son’ and ‘Marching Men’ dwelled on the psychological theme of inner lives of Midwestern villages, with its prime characters pursuing success and disillusionment.
His magnum opus came in 1919 when he released a collection of short stories titled, ‘Winesburg, Ohio’. The book was widely appreciated and established his reputation as a talented modern American author. It consisted of twenty-three thematically related stories, written in simple realistic language. The events and episodes in their like were real-like.
Despite the success of his short stories, he wanted to pursue novel writing as he believed that it provided him with larger scope. As such, in 1920, he came up with his third novel, ‘Poor White’. Unlike the other two, ‘Poor White’ received positive response. Same year, his short story work, ‘The Triumph of the Egg’ was released.
He followed this up with ‘Many Marriages’ in 1923, which is considered to be his finest novel till date. Two years later, he came up with his novel, ‘Dark Laughter’ in which he penned his experiences in New Orleans. The book went on to become a bestseller.
Continue Reading Below
In 1926, he came up with the semi-autobiographical novel ‘Tar: A Midwest Childhood’ in which he narrated his childhood experiences during the time he stayed in Caledonia.
Other than writing novels and short stories, he contributed extensively to newspapers. During the 1930s, he came up with two short story collections, ‘Horses and Men’ and ‘Death in the Woods’. He also wrote an essay titled, ‘Puzzled America’ and two novels, ‘Kit Brandon: A Portrait’ and ‘Beyond Desire’
In 1937, he published Plays, Winesburg and Others. His last work was an extensive essay entitled Home Town (1940). 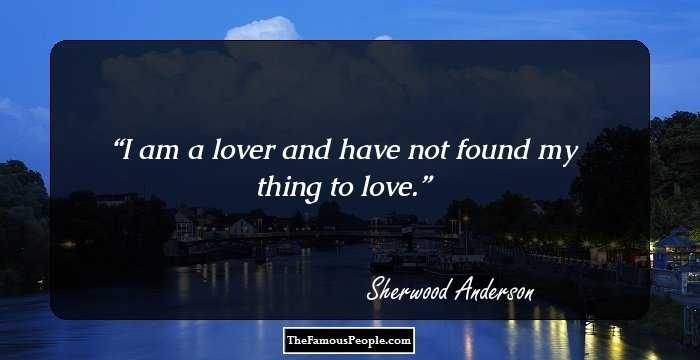 Quotes: Love, I
Personal Life & Legacy
He first met Cornelia Pratt Lane in 1903. Following a year of courtship, the two tied the nuptial knot. They were blessed with three children, Robert Lane, John Sherwood and Marion.
His marriage to Cornelia did not last long and he divorced her in 1916 to marry his mistress, the sculptor Tennessee Claflin Mitchell. The fate of this unison was also similar to the earlier one as he divorced her too in 1924.
He married Elizabeth Norman Prall, a fashion designer in 1924. But this marriage too didn't last long and the two divorced in 1932.
He married Eleanor Gladys Copenhaver in 1933. The two travelled and studied together and were active in trade union movement.
He breathed his last due to peritonitis on March 8, 1941. He was travelling to South America through a cruise at the time of his death. an autopsy stated that he had accidentally gulped a toothpick which caused the infection.
His work ‘Memoirs and Letters’ was published posthumously in 1953. Later, in 1969, it was published as ‘The Memoirs of Sherwood Anderson’.
In 1971, his home in Troutdale, Virginia, known as Ripshin Farm, was designated as a National Historic Landmark.
You May Like

Quotes By Sherwood Anderson | Quote Of The Day | Top 100 Quotes

See the events in life of Sherwood Anderson in Chronological Order