Seamus Heaney, one of greatest living poets of our age, was a wordsmith from Ireland, who was awarded the Nobel Prize in Literature. His poems, which have achieved great critical acclaim and are very, popular with the common man as well. Most of his poetry is based on the tradition and events of Northern Ireland, to which he has been a witness since his childhood. Owing to his upbringing in countryside, Heaney was deeply influenced by the life of country, which later, found expression in his poetry. But then, as he grew up he also watched the industrial mushroom around him, and soon he saw the rural side of Ireland deplete. All these events influenced his artistic talents, and he ultimately incorporated all these in his writings. Majority of his works are a quest of long lost tradition or the ‘pre-modern’ times, in which men lived and thrived in concord. Nevertheless, he was not one of those disillusioned poets, who could not discover the positive elements of the modern and the post-modern era. As a poet, he grew and evolved with time, not by disparaging it, but by analyzing and understanding it. His strength and mastery over the language of English, coupled with his considerate thoughts and matured approach have served as an inspiration for the present generation. Irish Celebrities
Poets
Novelists
Playwrights
Irish Men
Childhood & Early Life
Heaney was the first child born to Patrick Heaney and Margaret Kathleen McCann at his family’s farmhouse.
As a child he studied at the Anahorish Primary School, before earning a scholarship to St. Columb's College. He went to learn English Language and Literature at Queen's University, Belfast in 1957.
He graduated from Queen’s in 1961, after which he went on to join the Teacher’s Training Institute in Belfast. 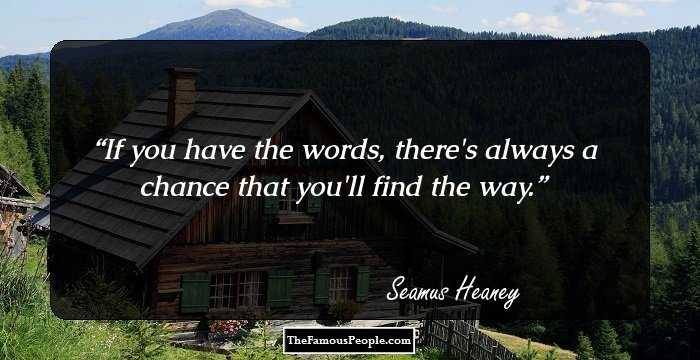 The Best Black Actresses Of All Time
Career
While undergoing training to become a teacher, he was introduced to the poetry of Patrick Kavanagh, which inspired him to write and publish his own set of poetry, beginning in 1962.
After a series of publications in several local magazines, he became a lecturer at St Joseph's in 1963. Soon, he became a part of a young Belfast poets association, initiated by Philip Dennis Hobsbaum, a British teacher and poet.
‘Eleven Poems’, his first book was published in 1965 which was meant for the Queen's University Festival.
He published his groundbreaking work, ‘Death of a Naturalist’ in 1966, which received extremely positive critical reception, after which he was employed by Queen's University Belfast as Modern English Literature lecturer.
He left Belfast for Dublin in 1972, where he worked as a teacher at the Carysfort College. The same year, he published ‘Wintering Out’, another collection of poetry.
He continued to publish more volumes of poetry and in 1981 he served as a visiting professor at Harvard University.
In 1985, he was employed as the Boylston Professor of Rhetoric and Oratory at Harvard University.
He was appointed as the Professor of Poetry at the University of Oxford in 1989. Since, he did not have to reside in Oxford, he was able to travel and give readings in public.
He was also involved in the editing of ‘The Mays Anthology’, a collection of poetry by the students of the University of Oxford and University of Cambridge in 1993.
Continue Reading Below
Throughout the 2000s, he was awarded several honors and doctorate degrees and in 2008 he was made artist of honor in �stermarie, Denmark. Two years later, he published his twelfth collection of poetry ‘Human Chain’.
He contributed his personal literary notes to the National Library of Ireland in December 2011, instead of auctioning or selling them. 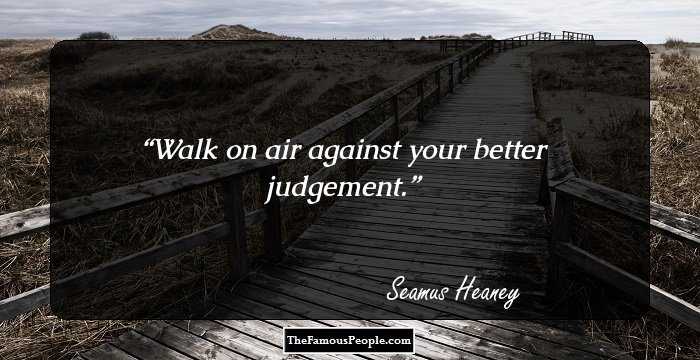 Major Works
‘Death of a Naturalist’ by the author has 34 short poems, based on the experiences of a child, as he grows up. The book won several prestigious awards and helped Heaney carve a niche for himself in the literary world.
‘District and Circle’ is one of his best works of poetry which won the T. S. Eliot Prize, the highest esteemed award in poetry in U.K.
Out of his several translations, the translation of the epic ‘Old English’ poem ‘Beowulf’ is by far, his most notable work.
Awards & Achievements
He was awarded the Nobel Prize for Literature in 1995 and according to the Nobel Committee his works exuded “…lyrical beauty and ethical depth, which exalt everyday miracles and the living past”.
For ‘District and Circle’, a collection of his poetry, he was awarded the T. S. Eliot Prize in 2006.
He received the Forward Poetry Prize for Best Collection, one of the most highly regarded prizes in poetry in U.K., in 2010, for his collection ‘Human Chain’. 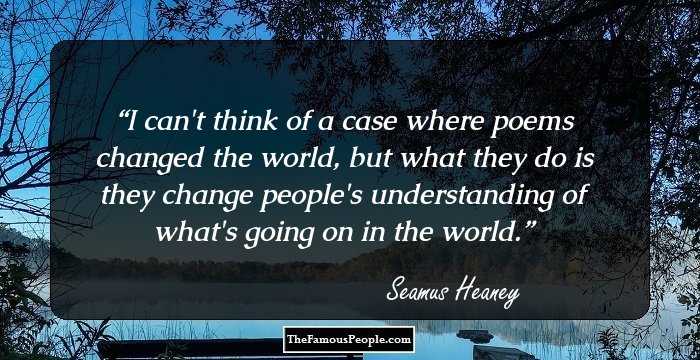 Quotes: Think, Change, I
Personal Life & Legacy
Seamus Heaney married Marie Devlin, a school teacher, in August 1965, with whom he had three children.
He died on 30 August 2013, in Dublin, at the age of 74, following a short illness
Trivia
This renowned poet was described as “the most important Irish poet since Yeats” by the famous American poet, Robert Lowell.
Recommended Lists:
Writers #1150
You May Like

Quotes By Seamus Heaney | Quote Of The Day | Top 100 Quotes

See the events in life of Seamus Heaney in Chronological Order