(Irish Novelist Who Won the 1969 Nobel Prize in Literature)

Nobel Prize winning Irish avant-garde playwright, novelist and poet, Samuel Beckett is revered as one of the most influential writers of the 20th century. He is best remembered as the father of the Postmodernist movement, whose body of work influenced a wide range of subsequent writers and filmmakers. He was also a writer of the ‘Theatre of the Absurd’, plays of absurdist fiction genre. His work has been embedded with elements of black comedy, gallows humour and offers a tragicomic outlook into human nature. His seminal work ‘Waiting for Godet’ is a timeless classic that delved into the absurdity of human existence. Samuel Beckett became a part of the French Resistance movement during the World War II and fled to escape war. During the years of war, he devoted his time to writing some of his most acclaimed works. He came back to Paris after the Germans left and reached the zenith of his writing career. Some of his best known works include, ‘Malone Dies’, ‘Molloy’, ‘The Unnamable’, ‘Watt’ and the play, ‘Endgame’. His works have been translated into more than twenty languages. Tana French
13th April In History
DID WE MISS SOMEONE?
CLICK HERE AND TELL US
WE'LL MAKE SURE
THEY'RE HERE A.S.A.P
Quick Facts

Irish Celebrities
Novelists
Playwrights
Non-Fiction Writers
Irish Men
Childhood & Early Life
Samuel Beckett was born on April 13, 1906 in Foxrock, Dublin, Ireland, to William Frank Beckett, a quantity surveyor and May Barclay Roe, a nurse. At the age of five, he began to learn music.
He attended the Earlsfort House School in Harcourt Street. From 1919, he attended the Portora Royal School in Enniskillen, County Fermanagh – it was the same school that Oscar Wilde attended.
He was a good cricket player and played two first-class games against Northamptonshire. He is, by far, the only Nobel laureate to be part of the Wisden Cricketers' Almanack, a cricket reference book.
From 1923 to 1927, he attended the Trinity College, Dublin, where he studied English, French and Italian. After he received a B.A. degree, he became a lecturer in the École Normale Supérieure (Paris), a higher education establishment. 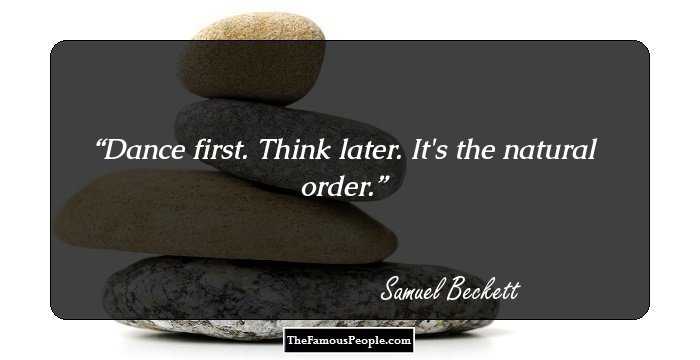 Quotes: Think
Continue Reading Below
Career
In 1929, his first critical essay titled, ‘Dante... Bruno. Vico.. Joyce’ was published. This piece of writing defended author James Joyce’s works and his methodology.
In 1930, he joined Trinity College as a lecturer and the same year he submitted a French paper on poet Jean du Chas to the Modern Languages Society of Trinity. Jean du Chas was the founder of the le Concentrisme movement.
In 1931, he came out with the essay titled, ‘Proust’, which he had finished authoring by the summer of that year. The following year, he completed his unpublished first novel, ‘Dream of Fair to Middling Women’. The book was rejected by many publishers and was published in later years.
In 1934, after his academic career came to an end at the Trinity College, he authored the poem titled, ‘Gnome’, later published in the ‘Dublin Magazine’. That year his collection of short prose, ‘More Pricks Than Kicks’ was published.
In 1938, he published his novel titled, ‘Murphy’. This work of prose fiction received many rejections and was finally published after the recommendation of his friend, Jack Butler Yeats.
After the 1940 occupation by Germany, he worked as a courier boy for the French Resistance movement and opposed the Nazi German occupation of France. During this time, he was betrayed by his unit, which led to his fleeing to Roussillon, Vaucluse.
In 1951, his French novel titled, ‘Molloy’ was published. This novel was later translated in English by Patrick Bowles. The same year, his French novel, ‘Malone Dies’ was published.
On January 3, 1953, his play, ‘Waiting for Godot’ premiered at the Théâtre de Babylone, Paris. This play revolved around two characters, ‘Vladimir’ and ‘Estragon’. The same year his novels, ‘The Unnamable’ and ‘Watt’ were also published.
In 1956, he wrote the short play, ‘Act Without Words I’, which was followed by its sequel ‘Act Without Words II’. That year he also wrote the one-act radio play, ‘All That Fall.’
Continue Reading Below
On April 3, 1957, his one act play titled, ‘Endgame’ premiered at the Royal Court Theatre, London. This play was written in the ‘Theatre of the Absurd’ style. That year his piece, ‘From An Abandoned Work’ was broadcast on BBC Radio 3.
On October 28, 1958, his play, ‘Krapp's Last Tape premiered and ran for a total of 38 performances.
In 1961, he authored the play, ‘Happy Days’. The same year, he also wrote the radio short plays, ‘Rough for Radio I’, ‘Rough for Radio II’ and ‘Words and Music’. The same year his French novel titled, ‘Comment c'est’ was published.
In 1962, his radio play, ‘Cascando’ was broadcast on the French public radio channel, ‘French Culture’. The following year his German play titled, ‘Spiel’ premiered in West Germany.
In 1966, his play, ‘Come and Go’ premiered at the Schiller-Theater Werkstatt in Berlin. He also wrote the screenplay for the movie titled, ‘Film’, directed by Alan Schneider, that year.
In 1976, his one act play, ‘That Time’ and ‘Footfalls’ was performed at the London Royal Court Theatre. Following this, his television play, ‘Ghost Trio’ was broadcast on BBC 2.
In 1981, his short novel, ‘Ill Seen Ill Said’ was published. Around this time, his short-one-woman play, ‘Rockaby’ premiered at the State University of New York. Furthermore, his ‘playlet’, ‘Ohio Impromptu’ was performed and TV play ‘Quad’ was broadcast.
In 1982, his short play titled, ‘Catastrophe’ was produced at the annual French festival, ‘Avignon Festival’. This was one of his few plays that dealt with a political theme.
On May 19, 1983, his last television play, ‘Nacht und Träume’ was broadcast. The same year, his last play titled, ‘What Where’ was produced and his prose piece, ‘WorstwardHo’ came out.
Continue Reading Below 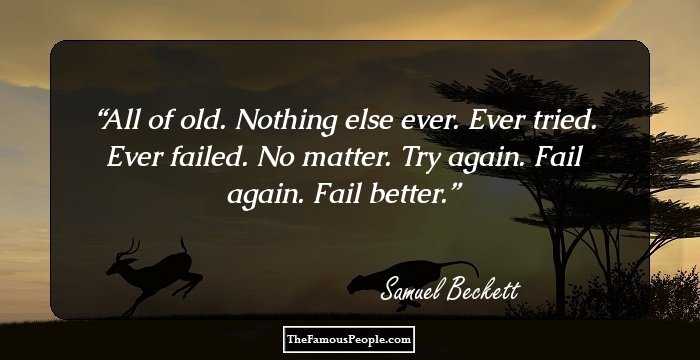 Major Works
His play, ‘Waiting for Godot’ was voted as ‘the most significant English language play of the 20th century’. This play is regarded as a timeless classic and it was one of his most famous works.
Awards & Achievements
In 1959, he received the honorary doctorate from Trinity College in Dublin.
In 1961, he was awarded the International Publishers' Formentor Prize.
In 1968, he became a Foreign Honorary Member of the American Academy of Arts and Sciences.
In 1969, he was the recipient of the Nobel Prize in Literature. 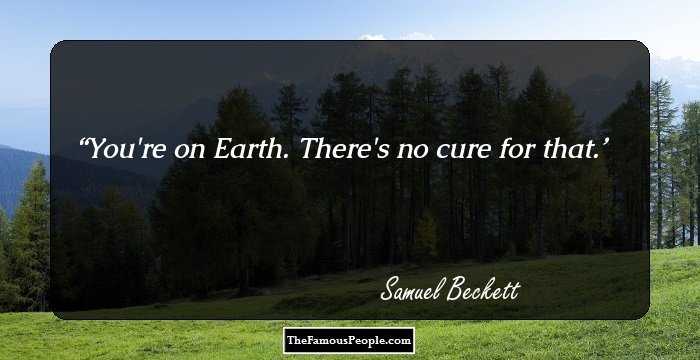 Personal Life & Legacy
From the late 1950s he became romantically involved with Barbara Bray, a widow with whom he also worked professionally. Their relationship lasted until his death.
In 1961, he married tennis player, Suzanne Deschevaux-Dumesnil in a secret civil ceremony that was held in England.
He died on December 22, 1989 at the age of 83 in Paris, France. He was interred along with his wife at the Cimetière du Montparnasse in Paris.
In 1992, his autobiographical novel, ‘Dream of Fair to Middling Women’ was posthumously published.
On his 100th birth anniversary, he was depicted on Irish commemorative coin.
Trivia
This Irish avant-garde playwright, novelist and poet often insisted that he had memories of life while he was still in his mother’s womb.
In 1938, this Nobel Prize winning writer and theater director was once nearly stabbed to death by a pimp, when he refused to entertain the pimp’s solicitations.
Recommended Lists:
Writers #95

Quotes By Samuel Beckett | Quote Of The Day | Top 100 Quotes

See the events in life of Samuel Beckett in Chronological Order