Sathya Sai Baba was an Indian guru who claimed to be the reincarnation of Sai Baba of Shirdi. Known for performing ‘miracles’ such as materialization of holy ash and small objects, resurrections, clairvoyance, and miraculous healings, he was both a famous and a controversial figure. He had hordes of ardent devotees who revered him as a great religious guru while he also had detractors who accused him for being a fraud. Nonetheless, he was a major religious figure in India and the Sathya Sai Organisation founded by him continues to be a popular organization with over 1,200 Sathya Sai Centres (branches) in 126 countries. He was born into a pious family in British India, and it is believed that his birth was heralded by miracles. Some sources even state that his conception was miraculous. He grew up to be an intelligent and compassionate boy who at the age of 14 announced to his family that he was the reincarnation of Sai Baba of Shirdi, a famous Indian saint who had died eight years before Sathya was born. He went on to become a spiritual teacher and founded the Sri Sathya Sai Organization in order "to enable its members to undertake service activities as a means to spiritual advancement."
Continue Reading Below Indian Celebrities
Spiritual & Religious Leaders
Indian Men
Indian Spiritual & Religious Leaders
Sagittarius Men
Childhood & Early Life
He was born as Sathyanarayana Raju on 23 November 1926 in Puttaparthi, Madras Presidency (now Andhra Pradesh), British India. His parents were Meesaraganda Easwaramma and Peddavenkama Raju Ratnakaram. His mother asserted that Sathya’s birth was by miraculous conception—she said that a strange bluish glow transformed itself into a luminous orb and entered into her womb near the village well which resulted in her pregnancy. Sathya had four siblings.
He grew up to be a very intelligent child and was unusually talented in devotional music, dance and drama. From a young age he was more inclined towards spirituality than he was towards worldly engagements.
A very significant incident happened when Sathya was 14 years old. On 8 March 1940, he was apparently stung by a scorpion and lost consciousness for several hours. He behaved strangely over the next few days and doctors diagnosed his symptoms as hysteria. His concerned parents consulted many priests, doctors and exorcists but none could “cure” him of this supposedly strange malady.
On 23 May 1940, Sathya materialized ‘prasad’ and flowers from thin air, further shocking his parents. Then on 20 October the same year he proclaimed himself to be the reincarnation of Sai Baba of Shirdi—a famous saint who had died eight years before Sathya was born.
Sathya Sai Baba also declared that his mission was to teach humanity the principles of truth, righteous conduct, peace, and divine love in order to bring about their spiritual growth. 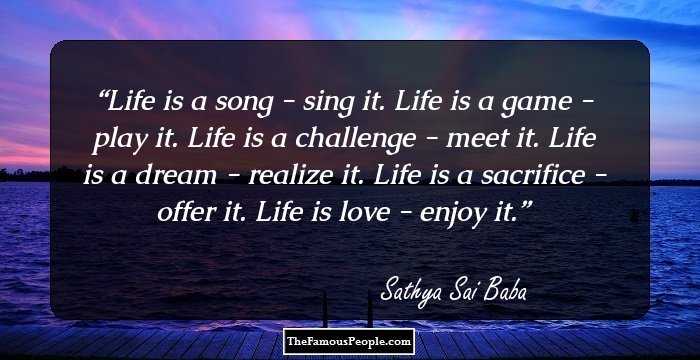 Quotes: Life, Love
Continue Reading Below
You May Like

The Sexiest Men Of 2020, Ranked
Later Years
Sathya Sai Baba began spreading divine knowledge to the masses and soon gained a devoted following. In 1944, a temple was built near the village of Puttaparthi to facilitate the growing number of Sai Baba devotees.
In 1948, he began overseeing the construction of Prashanthi Nilayam which was to become his main ashram. Sathya Sai Baba was the main engineer and architect who directed the construction for the entire project. The ashram was opened on 23 November 1950, his 24th birthday.
Over the years he became very famous for his miraculous healing powers and his philanthropic activities. He established a small free general hospital in the village of Puttaparthi in 1954 for the benefit of the poor.
He founded The Sri Sathya Sai Organization in the 1960s "to enable its members to undertake service activities as a means to spiritual advancement." The first Sai Centres were started in India under the name of the "Sri Sathya Sai Seva Samithi”.
He established three primary mandirs or spiritual centres in India: “Dharmakshetra" or "Sathyam" in Mumbai in 1968, “Shivam” in Hyderabad in 1973, and “Sundaram” in Chennai in 1981.
Sathya Sai Baba founded the Sri Sathya Sai University in 1981. The university provides free education on three campuses: Ananthapur (for women), Prasanthi Nilayam (for men), and Brindavan (for men, on the outskirts of Bangalore).
He established a network of free hospitals including Sri Sathya Sai General Hospital, Bangalore, which provides complex surgery, food and medicines free of cost. In addition he established several general hospitals, two specialty hospitals, eye hospitals and mobile dispensaries. His trust also conducts medical camps in rural and slum areas in India.
In spite of all his philanthropic and spiritual works, he was a highly controversial figure. He had been accused of several allegations including sleight of hand, sexual abuse, money laundering, fraud in the performance of service projects, and murder. However, he and his followers strongly rejected any allegations of misconduct and stated that these allegations were attempts by his detractors to defame him. 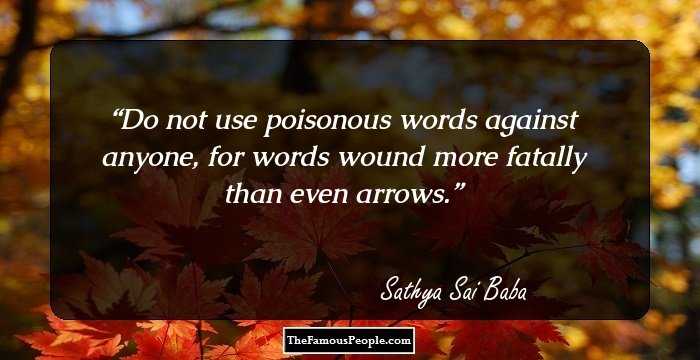 Major Work
Sathya Sai Baba founded the Sri Sathya Sai Organization in the 1960s through which several hospitals, educational institutes, ashrams and drinking water supply projects were established. The organization has over 1,200 Sathya Sai Centres (branches) in 126 countries and continues to provide services to humanity even years after his death.
Personal Life & Legacy
He fractured his hip in a freak accident in 2003 and started using a wheelchair from 2004. He gave fewer public appearances during his later years.
Sathya Sai Baba died on 24 April, 2011, after nearly a month of hospitalization for respiration-related problems. He was buried with full state honours on 27 April 2011 and his burial was attended by several prominent personalities like then Indian Prime Minister Manmohan Singh, then Gujarat Chief Minister Narendra Modi, Cricketer Sachin Tendulkar, etc. 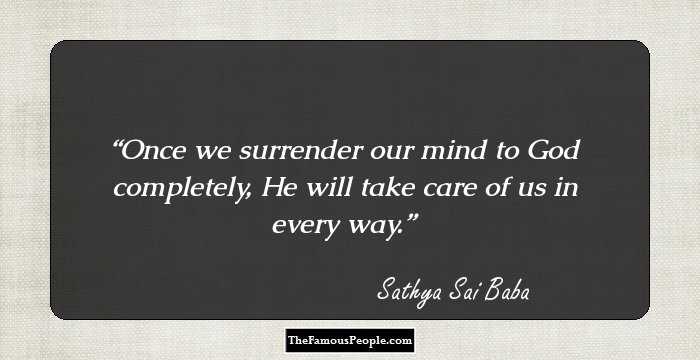