Advanced Search
Sri Chinmoy, born as Chinmoy Kumar Ghose, was an Indian spiritual master who advocated that inner peace and spiritual attainment can be achieved through meditation and athleticism. Born in East Bengal, the guru later migrated to New York City where he opened meditation centers and gave lectures on spirituality. He was a prolific writer, poet and musician who used to give musical concerts free of charge. He advocated the philosophy of ‘self-transcendence’, through which a person can conquer his mind’s limitations by expanding one's consciousness. He always emphasized upon the importance of physical activities to maintain good physical and mental health which is imperative to spiritual growth. He organized several athletics events including running, swimming and cycling events; he was especially inclined towards running and was an active runner until well into his sixties. He was a skilled musician and advised other musicians to avoid a life of alcohol and drugs and embark on a spiritual journey through music and poetry. He taught his followers that they could reach great spiritual heights through the practice of unconditional love, devotion and surrender. Even though he was brought up in Hindu tradition, he promoted inter-faith harmony as he felt that “Love of God” was the only true religion. Mata Amritanand...
DID WE MISS SOMEONE?
CLICK HERE AND TELL US
WE'LL MAKE SURE
THEY'RE HERE A.S.A.P
Quick Facts

Indian Celebrities
Indian Men
Indian Spiritual & Religious Leaders
Virgo Men
Childhood & Early Life
He was the youngest of the seven children of Shashi Kumar Ghose and Yogamaya. His father was a railway inspector who later founded a small Chittagong bank.
His father died in 1943 and his mother also passed away a few months later. Orphaned at the age of 12, he joined the Sri Aurobindo Ashram in Puducherry in 1944.
He became deeply involved in spiritual practice and studied Bengali and English literature. For around two decades he remained at the ashram and worked in the ashram’s cottage industries while practicing spirituality and meditation. He also became a skilled athlete during this time. 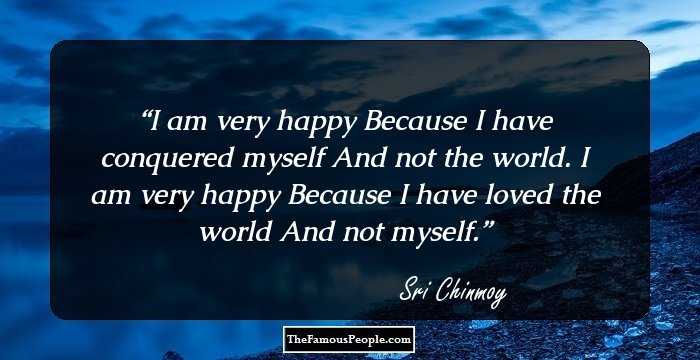 Quotes: I
Continue Reading Below
Later Years
He went to the U.S. in 1964 at the age of 32 to share the teachings of India with a wider global audience. He found a job at the Indian consulate and received tremendous support from his colleagues.
He started to give talks on Hinduism and was soon invited to speak at universities. Eventually he started speaking at the United Nations.
He went on his first lecture tour in 1968 and had since then spoken at Oxford, Cambridge, Harvard and Princeton Universities. In 1974 he lectured at universities in each of the fifty states in the U.S.
During the 1970s, he became very popular and famous and people began to flock to hear him speak. A musician himself, he advised the musicians of the west to steer clear from drugs and alcohol and maintain a clean life. Several musicians like Santana, Narada, and Roberta Flack among others were influenced by him.
He was chosen as the director of the United States Meditation Group at the U.N. headquarters in New York in the 1970s. He had been invited to teach meditation at the U.N. by the then secretary general U Thant.
At the U.N., he conducted twice-weekly meditation sessions for the delegates and staff members. Through his work at the U.N., he aimed to contribute towards bringing peace and understanding to the nations of the world. He was a wide traveler and was described as an ambassador of peace and he advocated world harmony.
He opened meditation centers all over the world and also gave music concerts. He advocated the philosophy of self-transcendence which teaches that one can conquer the mind’s perceived limitations through expansion of one’s consciousness.
He believed that spiritual growth can be attained through athletic activities, especially running. The Sri Chinmoy Marathon Team was founded in 1977. The team holds running, swimming and cycling events all over the world.
Even though he was raised in the Hindu religion, he believed that the only true religion was the “Love of God”. He respected all the world religions and promoted inter-faith harmony. Because of this, he was invited to open the Parliament of the World’s Religions in Chicago in 1993.
Continue Reading Below
He began painting in 1974. Several of his paintings are displayed in Victoria and Albert Museum, UNESCO Headquarters and offices and in Louvre in Paris.
He was a very skilled musician and had composed thousands of pieces with lyrics in Bengali and English. He also has one meditative album to his credit, titled, ‘Music for Meditation’. He gave several free music concerts all over the world. 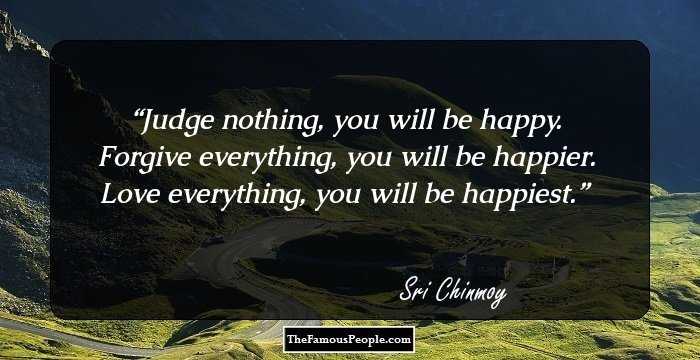 Quotes: You, Love, Will
Major Works
As a spiritual leader he advocated world peace and harmony through unconditional love, devotion and surrender. He was a prolific author, poet and musician who taught that human beings can reach greater spiritual heights through creative pursuits and athletic activities.
Awards & Achievements
In 1994 he jointly received the Mahatma Gandhi Universal Harmony Award with Martin Luther King’s wife Coretta Scott King, from the American branch of the Indian cultural institute Bharatiya Vidya Bhavan.
He received the Pilgrim of Peace prize from the 'International Center of Assisi for Peace among Peoples' in 1998. 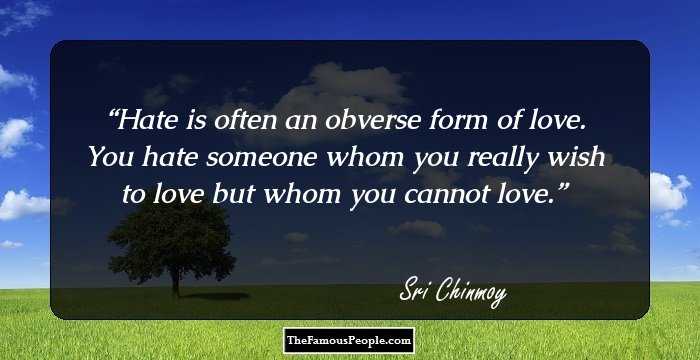 Quotes: You, Love
Personal Life & Legacy
Many of his relatives including his elder brothers Hriday and Chitta were involved with the Sri Aurobindo Ashram from where he started his spiritual journey.
He died of a heart attack in 2007 at the age of 76.

Quotes By Sri Chinmoy | Quote Of The Day | Top 100 Quotes

See the events in life of Sri Chinmoy in Chronological Order