Anthony de Mello was an Indian Jesuit priest and psychotherapist. He was also a reputed religious teacher, public speaker and a writer. Born into a Roman Catholic family in pre-independence India, he decided to become a Jesuit priest while he was still a child, ultimately joining the order at the age of sixteen. Initially, he was very conservative in his theological beliefs and did not want to explore other religions. He practiced meditation and contemplations as prescribed by his faith and had his first mystical experience during his tertianship in Spain, where he attended a 30-day retreat. Later he himself became a successful retreat guide and director. Subsequently, from the mid-1970s, he began to move away from his initial dogmatic views and began to explore other religions. He later wrote a number of books on spirituality and hosted many spiritual retreats and conferences. Today, he is remembered for his unconventional approach to priesthood, drawing from the mystical traditions of East and West. Mata Amritanand...
Spiritual & Religious Leaders #686
4th September In History
DID WE MISS SOMEONE?
CLICK HERE AND TELL US
WE'LL MAKE SURE
THEY'RE HERE A.S.A.P
Quick Facts

Indian Celebrities
Indian Men
Indian Spiritual & Religious Leaders
Virgo Men
Childhood & Early Years
Anthony de Mello was born on 4 September 1931 in the outskirts Mumbai, at that time known as Bombay, into a Catholic family. His father, Frank de Mello, a native of Goa, was a railway worker. His mother was Louisa (née Castellino) de Mello. He was the eldest of his parents’ five children.
Lovingly called Tony by his friends and family, Anthony was the eldest son of his parents. Therefore, it was expected that like his father, he would join the Indian Railways and earn enough to look after the family.
However, from his childhood, Tony was spiritually inclined and wanted to become a Jesuit priest. He was greatly attracted to the order because of the disciple inherent in the system.
When the time came, Tony was admitted to Stanislaus High School. He was an intelligent boy and showed great social skills at school. However, his desire to join the Jesuit order did not diminish in any way.
At the same time, he was aware of his responsibilities as the eldest and only son of the family and was greatly troubled by it. He told his mother that he would pray to God so that He gives her another son because that would allow Tony to pursue his goal with a clear mind.
However, his mother was by them in her forties and so she did not think much of it. But she did conceive sometime in 1943 and on 29 July 1944, she gave birth to his younger brother Bill.
In his book, ‘Anthony De Mello: The Happy Wander: A Tribute to My Brother’, Bill De Mello had later gave expression to the struggle thirteen-year-old Tony was going through.
On the day that Bill was born, an anguished Tony ran all the way from home to the maternity clinic, wondering if it was a sister or a brother. If the child was a male, he would be free to join the Jesuit Order and if it is a female, an apprenticeship at the railway awaited him.
When he found that it was a boy, he must have been highly relieved. However, his parents did not yet take his aspirations very seriously and in his final years of his high school he attended a career counseling course and at the same time re-announced his resolution to join the Jesuit order.
His mother, fearing that she would not be able to see her son anymore if he joined the order, pleaded with him to reconsider his decision; but later relented. Finally, in July 1947, Anthony de Mello joined the Society of Jesus in the seminary of Vinalaya, at the outskirts of Bombay. 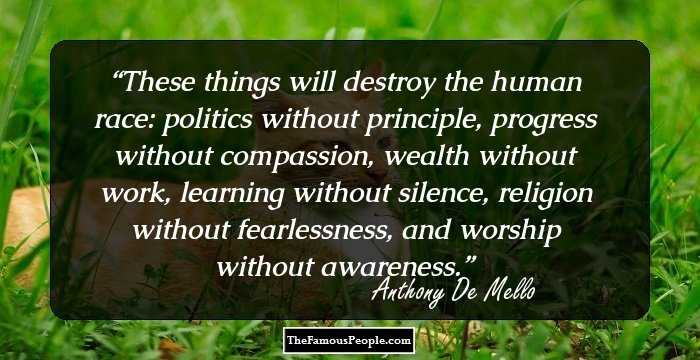 Quotes: Will, Learning
Continue Reading Below
You May Like

The Hottest Male Celebrities With The Best Abs
In the Order
Anthony De Mello quickly adjusted to the way of life at the seminary. He had an excellent memory and read extensively. He also practiced meditation and contemplation as mentioned in ‘Spiritual Guidance’, a book of instructions compiled by St. Ignatius Loyola, the founder of the Jesuit order.
In the beginning, he was rather dogmatic in his theological beliefs and refused to explore other religions with open heart. He held the Catholic faith to be sacrosanct.
One day when one of his sisters came visiting him, he told her, “Our Mother Church is just and you are guilty. You must not doubt that and don’t forget that the Pope is infallible.” It is not known why he made such a strong statement, but it shows how much he respected his faith.
In 1952, De Mello was sent to study philosophy in Barcelona, Spain. He remained there for three years and mastered Spanish and also Ciceronian Latin. It may not be out of place to add that, while his mother tongue was English, he also knew French, Marathi and few other languages.
It is believed that during his tertianship in Spain, while attending a 30-day retreat under Fr. Calveras, S.J., a world famous authority in conducting the Spiritual Exercises of St. Ignatius, he had a very powerful mystical experience. It gave him profound insight into the spirituality of St. Ignatius. 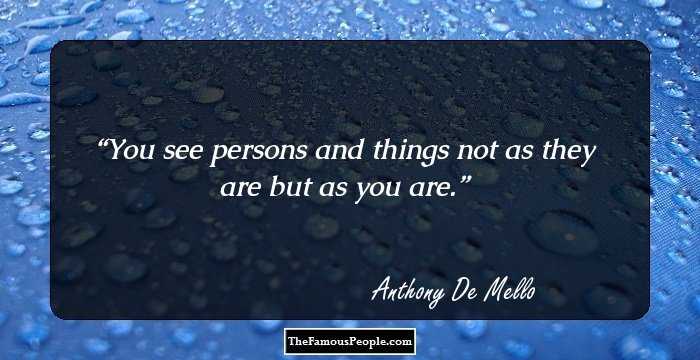 Quotes: You
Ordained Into Priesthood
On his return to India, he was given various responsibilities, which he carried out with utmost sincerity. At the same time, he followed his faith with all devotion, going through the rituals with utmost dedication. Finally in March 1961, de Mello was ordained into priesthood.
Thereafter, he was sent to study psychology and counseling at Loyola University in Chicago. He received his Master's degree in pastoral counseling from there in 1964. During this time, the works of Carl Rogers and Fritz Perls, both of who were noted psychologists, influenced him most.
Thereafter, De Mello returned to India and started working at Jesuit seminaries. He was soon given the responsibility of guiding the Jesuit novitiate during their mandatory 30-day retreat in silence. Later he was made a retreat director.
Continue Reading Below
Over the years, he found that the novitiates could not take the advantage of retreat because they were mostly locked up with their inherent psychological problems. Therefore, he started counseling them, an approach not yet in practice in Jesuit circles.
Later in 1972, De Mello established the Institute of Pastoral Counselling at De Nobili College, Poona, India. It was later shifted to other premises and has now been renamed as Sadhana Pastoral Counselling. The retreats he began to hold soon became very popular and were attended by many spiritual seekers.
Opening Up
From the mid-1970s, de Mello began to take interest in other religions as well. He became especially interested in the Buddhist meditation technique called Vipassanā and thus became exposed to Buddhist philosophy.
Soon he began to ask himself many questions, which went against the theological training he received at the seminaries. He now began to ponder upon human predicament and various religious responses to this very basic question.
He also started wondering if the response of Jesus Christ to human predicament was any different from responses of other great leaders such as Buddha, Krishna, Moses, Confucius, Lao Tzu or Muhammad. At the same time, he remained as loyal to his own faith as he was before.
In 1978, he published his first book, ‘Sadhana – A Way to God.’ Written in English, it outlined a number of spiritual principles and exercises as taught by Saint Ignatius and also incorporated many practices taught by eastern religions. The book became an instant hit.
Soon, he became well-known as a public speaker and began to be invited to different forums at India and abroad. For example, his second published work, ‘Wake Up! Spirituality for Today’ was actually a ninety minutes talk he gave before a live audience.
In ‘The Song of the Bird ‘, published in 1982, he gave a clearer view of what he thought about spirituality. According him, merely applying traditional methods, handed over by masters, is not spirituality unless it can bring inner transformation in the person.
Thereafter, he published a few more books, including 'Wellsprings' (1984), 'One Minute Wisdom' (1985) and 'The Heart of the Enlightened' (1987). Many other books have been published after his sudden death in 1987.
Continue Reading Below
He had a compelling charisma and easily convinced his audience to donate to the poor. He also encouraged them to practice Vipassanā meditation and study it under Burmese-Indian teacher Satya Narayan Goenka.
However, he himself was highly influenced by Jiddu Krishnamurti, the well-known Indian philosopher, speaker and writer. Other than that, the thoughts and spirits of Mahatma Gandhi and philosophy of Bertrand Russell also left profound marks on his thoughts. 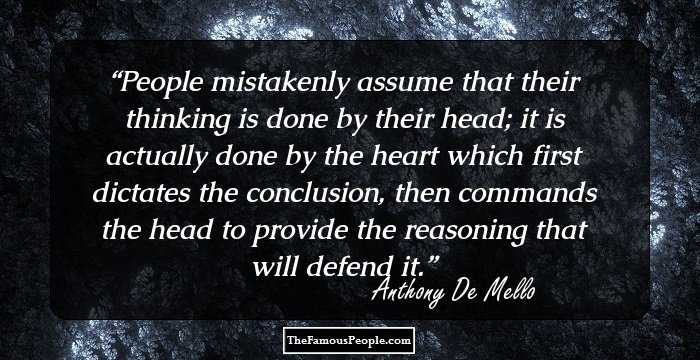 Quotes: Will, Heart
Major Works
His 'One Minute Wisdom', published in 1985, is one of de Mello’s most inspiring works. The book contains more than two hundred parables and lessons on how to live a full yet simple life and takes the reader towards a new level of contemplation, leading to love and harmony.
Death & Legacy
In May 1987, Anthony de Mello went to United States of America to conduct seminars on spirituality via a satellite linkup with 600 colleges in the US and Canada. On June 1, he met his brother Bill at the Fordham University in the Bronx, New York City.
The two brothers had their dinner together at the University canteen. While Anthony de Mello was otherwise healthy, after dinner, while the two brothers sat together, he complained of stomach unease. When medicines did not help, he decided to retire early.
Therefore, the two brothers hugged and pledged to meet later in the year at his retreat in India. The ensuing night, on June 2, 1987 Anthony de Mello died from a heart attack. The next day, his body was found on the floor of his room.
In 1998, eleven years after his death, the Congregation for the Doctrine of the Faith, under the leadership of its Cardinal-Prefect, Joseph Ratzinger (later Pope Benedict XVI) conducted a review of his works. They determined that some of his beliefs, especially his position on Jesus Christ, were incompatible with Catholic faith.
Nonetheless, de Mello remains as popular as ever and the Sadhana Institute of Pastoral Counselling he established continues to work for the betterment of mankind, carrying on his legacy.
Trivia
As De Mello did not have any history of heart ailment and was given a clean chit by eminent heart specialists in the United States only a few months before his demise, many suspected foul play in his sudden death.
You May Like