Advanced Search
Mata Amritanandamayi, lovingly called Amma, Ammachi, or Mother, is a Hindu spiritual leader of international standing. Also known as the 'Hugging Saint', Amma is known to hug and bestow her unconditional love on people from all walks of life. Born as Sudhamani Idamannel in the fishing village of Parayakadavu, which falls in the state of Kerala, in India, she had only four years of formal education. Neither did she have the chance to study scriptures under any enlightened teacher. Contrarily, she spent her childhood and youth taking care of her family, dedicating all her chores to Lord Krishna and it was through this selfless act and devotion that she gained the highest knowledge. Very soon, she began to attract serious spiritual seekers, who were drawn to her as much by her spirituality as by her love and compassion. It led to the formation of Mata Amritanandamayi Math with Ammachi as its founder and chairperson. Today, it has branches in forty countries and everywhere they work for the upliftment of the local people, fighting hunger, empowering women, opening schools and institutes of higher education. More importantly, she continues to guide her children into the right religious path, imparting the teachings of the Vedas in simple language. Jaggi Vasudev
DID WE MISS SOMEONE?
CLICK HERE AND TELL US
WE'LL MAKE SURE
THEY'RE HERE A.S.A.P
Quick Facts

Indian People
Women Spiritual & Religious Leaders
Indian Spiritual & Religious Leaders
Libra Women
Childhood & Early Life
Mata Amritanandamayi was born on 27 September, 1953 in the coastal village of Parayakadavu, located under Alappad Panchayat of Kollam District, in the state of Kerala. At birth, her name was Sudhamani, meaning ambrosial jewel.
Her father, Sugunanandan Idamannel, was engaged in the fishing trade, maintaining his family by selling fish. He and his wife, Damayanti Idamannel, had seven children, out of whom Sudhamani was born third. She proved to be extraordinary from her very birth.
It is said that unlike other children, Sudhamani was born with a divine smile on her face. She had later said that even at birth, everything seemed familiar to her. She was also aware that the world was nothing but ‘the play of Consciousness’ and so she did not cry.
As time passed, it became more apparent that Sudhamani was different from the rest, learning to talk and walk when she was barely six months old. Even as a child, she was very devoted to Lord Krishna, possibly their family deity and was seen constantly taking His name.
By the age of three, she was constantly singing devotional songs, which she must have picked up from his family members or neighbors, delighting everyone around her. But within two years, as her spiritual mood became more intense, her parents became concerned about her.
By the age of five, she began to compose hymns to her beloved Krishna. By and by she also started spending more time in meditative state, singing and dancing to her Lord on the seashore. To restrain her conduct, her parents severely scolded her; but she remained devoted as ever.
Also at the age of five, she began her education at the village school; but she was not destined for the worldly education. As she reached nine, her mother became ill and in spite of being a brilliant student, she was withdrawn from school to take up the household responsibilities. 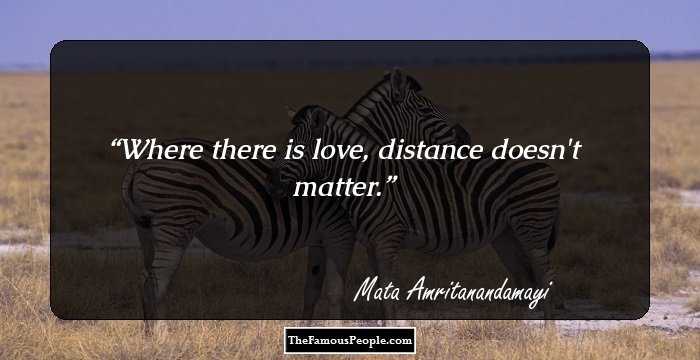 Quotes: Love
Continue Reading Below
Awakening of Motherhood
Although Sudhamani was still very young, her days were now spent in cleaning the house, washing the utensils, cooking food and feeding her family. The household cows were also her responsibilities and apart from gathering grass, she went from door to door seeking vegetable peels and rice gruel for them.
Thus waking up before dawn and working constantly till midnight, Sudhamani led an apparently grueling life. But in reality, she was happy for she worked not for her family, but as a service to her Lord Krishna. In addition, she would take the Lord's name incessantly with every breath.
As she cooked she thought Lord Krishna would now come for his meal. When she cleaned the courtyard she thought that her Lord would soon be there. Thus she experienced a constant flow of divine thoughts, no matter where she was or what she was doing.
While she was happy with her spiritual experiences she was also troubled by the sufferings she saw around her. While collecting vegetable peels, young Sudhamani noticed that many people were starving or sick without recourse to food or medicine. She also saw how elder generation was neglected by their family.
Young that she was, she began to contemplate on the suffering, praying to her Lord for recourse. Slowly, she began to feel an urge to reach out and help those in need. Despite her young age, the mother in her had started awakening.
She now began to donate food and clothing to the needy, physically taking care of those who did not have anybody to look after them. Her parents, who were equally poor, could not appreciate her acts of kindness and severely punished her for it. But she continued with her service.
While the days were spent in service, she spent the nights in intense meditation. As she reached her teens, her spiritual quest became more intense. To cure her, of what her parents considered madness, they sent her away to a relative’s place, where she was kept busy with constant work.
When it did not help, her parents tried to marry her off; but by then, Sudhamani, had chalked out a different life for herself and so she refused to get married. Although this made her parents angry and herself an object of ridicule she remained steadfast in her decision. 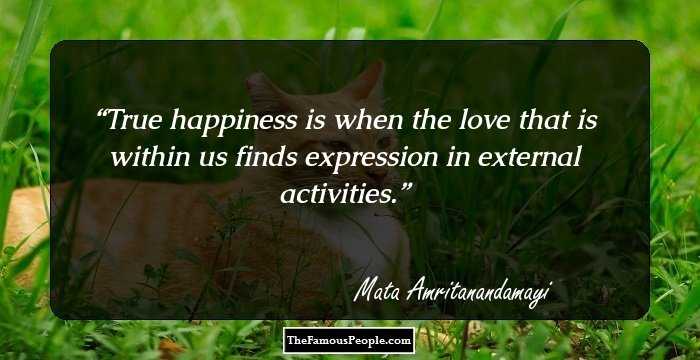 Quotes: Love, Happiness
Continue Reading Below
Experiencing Krishna Bhava
By the time Sudhamani had reached her late teens, she was established in an inner bliss. But at that time, her divinity was well-hidden. Although she sang and danced in ecstasy, experiencing supreme love, nobody realized the state of her spirituality until one fateful day at the age of 22.
One day in September 1975, as she was returning home with a bundle of grass, she heard last verses of Shrimat Bhagavatam being recited from a neighboring house. At the end of it, as the devotees started singing songs in praise of Lord, she suddenly fell in a trance.
Running inside the house, she stood among the devotees, fully immersed in the thoughts of Shri Krishna. Feeling one with Him, she automatically took up the postures of the Lord and witnessing the divine mood, the onlookers bowed down in reverence.
From now on, she felt identified with Lord Krishna, very often going into deep Samadhi. At other times, remaining immersed in ‘Krishna bhava’, she danced and sang, taking care to keep her spiritual experiences hidden from others.
One day, wishing to remain one with her Lord, she decided to give up her body in ‘samadhi’. But just then, she heard an inner voice, urging her not to do so, but work for those who were leading miserable life on this earth.
Sudhamani now spent greater part of day on the seashore near her home. Slowly, she began to develop a band of devotees, who went to meet her on the sea beach. Concurrently, a group of young men, who called themselves ‘Rationalist’, began to oppose her.
Seeing the harassment meted out to his daughter by the ‘Rationalist’, Sudhamani’s father converted their cowshed into a proper room. Thereafter, she began to meet her devotees there, singing and dancing in ecstasy.
As Mata Amritanandamayi
It was not known exactly when, but very soon, Sudhamani experienced the presence of the Universal Mother in her. From that day onward, she began to see everything around her as her own ‘Atman’. She now became ‘Amrita’, the divine nectar, embracing the entire mankind as her own self.
Her love and compassion began to attract a large number of devotees, who began to pour in from distant places just to spend a few minutes with her. While she alleviated their misery by her miraculous power, she was more interested in guiding them into the right path.
Continue Reading Below
From 1979, more serious spiritual seekers, intending to lead monastic life, began to come to her. The first to come was a young boy called Balu, who would later be known as Brahmachari Amritatma Chaitanya. Calling her Mata Amritanandamayi, they started residing in her parents' property.
In 1981, with the permission of Sugunanandan Idamannel, they built a few thatched cottages on that property. Thus was laid the foundation of, what later became known as Mata Amritanandamayi Math (MAM).
By and by, her fame began to spread abroad and in 1986, she told a gathering that she had children all over the world and they were crying for her. In the following year, on the invitation of Kusuma Gretchen Venkatesh, she visited California. This was her first visit abroad.
In 1989, she initiated Brahmachari Amritatma Chaitanya in ‘sanayasa’, giving him the sanyasa name of Swami Amritaswarupananda Puri. In her address to the assembled devotees on that day she expressed her happiness on being able to dedicate her son in the service of the world.
Since then, she has initiated many more in the holy order of ‘sanyasa’, dedicating them for the good of the mankind. Concurrently, she remained ‘Ammachi’ to millions of householders across the world.
Whoever goes to visit her always gets a warm hug. It started when, out of compassion, she hugged certain devotee, who burdened with great hardship, fell on her lap crying. Seeing this, others too wanted to be hugged and thus the tradition was born. Known as the ‘Hugging Saint’, she has hugged more than 33 million people throughout the world. 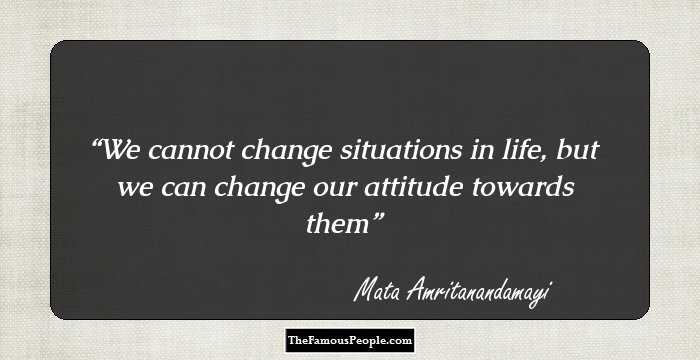 Quotes: Life, Change
In Service of Mankind
Mata Amritanandamayi believes that just as a bird needs two wings and a tail to fly, a seeker must practice devotion (bhakti), action (karma) and knowledge (jnana) if s/he wants to attain the ultimate bliss. Therefore, along with meditation and bhajana, she dedicated her disciples to the service of the mankind.
In 1997, she launched a housing program, Amrita Kuteeram, with the aim of building 25,000 homes for the homeless throughout India. Once the initial target was reached in 2002, they continued to build more houses across India.
Continue Reading Below
In 1998, she launched Amrita Nidhi, a program that provides monthly pension for 50,000 physically and mentally disadvantaged individuals and widows. In the same year, The Amrita Institute of Medical Sciences (AIMS) or 'Amrita Hospital' was launched in Kochi at her inspiration.
From 2001, the math has started sending volunteers and necessary resources wherever there is a natural calamity or other kind of disasters.
Amma is also very conscious about cleanliness and the lack of sanitation in rural India. Since 2012, her organization has taken up an annual program of cleaning the Pampa River and Sabarimala Temple pilgrimage site.
In 2015, she donated USD15 million to the Government of India for constructing toilets for poor families living on the banks of the River Ganges. In the same year, she has also pledged another USD 15 million for toilet construction in the state of Kerala.
Awards & Achievements
Over the years, Amma has received many awards from different national and international organizations. Chief among them are Hindu Renaissance Award from Hinduism Today (1993) and the Gandhi-King Award for Non-Violence from The World Movement for Nonviolence (UN, Geneva, 2002).
In 1993, Mata Amritanandamayi was elected 'President of the Hindu Faith' by the Parliament of the World's Religions held in Chicago.
In 2010, The State University of New York awarded Ammachi an honorary doctorate.
In 2012, Mata Amritanandamayi was included in the Watkins' list of the top 100 most spiritually influential living people in the world
In 2014, American liberal website, The Huffington Post, included her in the list of 50 most powerful women religious leaders.

See the events in life of Mata Amritanandamayi in Chronological Order