Sarah Silverman is an American actress, stand-up comedian, singer, writer, and producer. Known for her sassy remarks and tongue-in-cheek humor, she rose to prominence due to her satirical comedy. She is also known for voicing her opinion on social taboos and controversial topics, including racism, sexism, and religion. Interestingly, she developed a passion for comedy at a very young age. She started performing in her teens at local clubs and community theatres. Eventually, she dropped out of ‘New York University’ to pursue a full-time career in comedy. Though she received a major break after she was roped in as a writer and performer at ‘Saturday Night Live,’ she could not make most of the opportunity as she was ousted after the first season. The disappointing start did dishearten this young and talented comedienne but she made a comeback with HBO’s sketch comedy ‘Mr. Show,’ featuring Bob Odenkirk and David Cross. Since then, she has been cast in several television shows. She has also been featured in films where she has played comic and serious roles. She hogged the limelight with her controversial statements and performance in a show titled ‘Jesus is Magic.’ In 2005, a film version of the same was released. Two years later, she was seen in the flagship program ‘The Sarah Silverman Show’ which ran until 2010 on ‘Comedy Central.’ The show became one of the most popular series for its politically incorrect humor. American People
Jewish Actresses
Actresses
Stand-up Comedians
American Women
Childhood & Early Life
Sarah Kate Silverman was born on December 1, 1970, in Bedford, New Hampshire, USA, to Beth Ann and Donald Silverman. From an early age, she had the knack for entertaining people with her raunchy, politically incorrect comedy.
During her early years, she went through a troubled phase. The Silvermans lived in a town dominated by Christians, which made young Sarah feel like an outsider as they belonged to the Jewish community. Furthermore, she battled with bouts of depression.
She developed an interest in comedy which stayed with her right through. At the age of 17, she started appearing at local clubs and community theatre and performed her first stand-up routine in Boston.
She received formal education from ‘The Derryfield School’ in Manchester before enrolling at the ‘New York University’ to study dramatics. However, she dropped out of the university to pursue a full-time career in comedy. 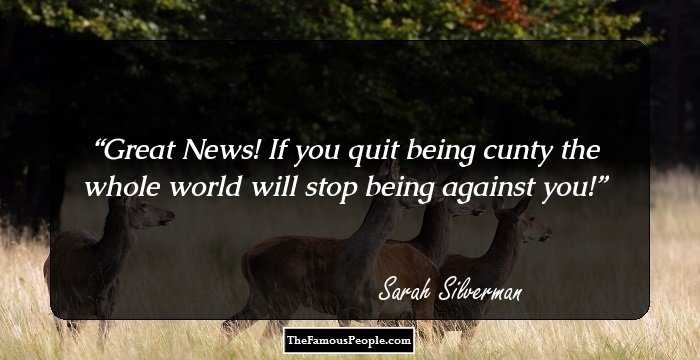 Quotes: You, Will
Continue Reading Below
Career
After dropping out of the university, she performed open mic gigs around Manhattan. It was during one of the tours that she was spotted by a scout of the legendary television show ‘Saturday Night Live’ or SNL.
In 1993, she earned the position of a writer and performer at SNL. However, she was fired after a season. Furthermore, none of her jokes was aired as they were labeled ‘nonconformist.’
The hiatus did not last long as she bounced back in 1995 for the HBO sketch comedy ‘Mr. Show,’ featuring Bob Odenkirk and David Cross. In the following year, she appeared on ‘The Larry Sanders Show,’ playing a spoof of her stint at SNL. She also starred in two episodes of ‘Star Trek: Voyager.’
In 1997, she landed the lead role in Sam Seder’s film ‘Who’s the Caboose?’ She and Seder reunited for a six-episode television series sequel titled ‘Pilot Season.’ The same year, she was also seen making guest appearance in ‘Seinfeld.’
Her acting skills earned her roles in various films, including ‘There's Something About Mary,’ ‘Say It Isn't So,’ ‘School of Rock,’ ‘The Way of the Gun,’ ‘Overnight Delivery,’ ‘Screwed,’ ‘Heartbreakers,’ ‘Evolution,’ ‘School for Scoundrels,’ and ‘Rent.’
Her television and film career ran collaterally as she starred in a number of television comedies, such as ‘VIP,’ ‘Greg the Bunny,’ ‘Crank Yankers,’ and so on. Meanwhile, she began appearing in a one-woman show titled ‘Jesus Is Magic.’ In the show, she cracked a number of jokes on off-limit subjects, including September 11 attack and holocaust.
In 2005, she starred in the film version of her one-woman show titled ‘Sarah Silverman: Jesus is Magic.’ The film received mixed reaction from the critics. It managed to amass US $1.3 million at the box office.
Furthermore, her acting career witnessed an upsurge as she took up various roles. She played the role of a therapist in a skit for the DVD of the album ‘Lullabies to Paralyze.’ She parodied sketches from Chappelle's Show and appeared at the end of the video for American glam metal band ‘Steel Panther.’
Her career reached its zenith after the launch of her flagship show ‘The Sarah Silverman Program’ in 2007. The show became a major success, with 1.81 million viewers and high ratings. The show lasted for three seasons and she played a fictitious version of herself.
Continue Reading Below
In 1997, she made her TV stand-up comedy debut on the ‘Late Show with David Letterman.’ She even hosted the ‘MTV Movie Awards’ and appeared in the ‘MTV Video Music Awards’ in 2007.
In 2008, her song with Matt Damon, ‘I’m Fucking Matt Damon,’ won her an ‘Emmy Award’ for ‘Outstanding Music and Lyrics.’ The video was an immediate sensation and created a stir as it was launched on her then boyfriend Jimmy Kimmel’s show, ‘Jimmy Kimmel Live!’
She was seen making a guest appearance as ‘Marci Maven’ in the second-season episode of the USA cable program ‘Monk’ in 2004. She later appeared in each of sixth and seventh season episodes as well. She then appeared in a documentary titled ‘Strange Powers.’ The documentary was about cult songwriter Stephin Merritt and his band ‘The Magnetic Fields.’
She turned a writer in 2010 with her comic memoir ‘The Bedwetter: Stories of Courage, Redemption and Pee.’
In 2011, she was cast in a dramatic role in Sarah Polley’s film ‘Take This Waltz’ where she appeared alongside Michelle Williams and Seth Rogen. The movie was premiered at ‘Toronto International Film Festival’ and was well received.
Her other projects include playing a voice role as ‘Vanellope von Schweetz’ in the 2012 Disney animated film ‘Wreck-It Ralph.’ Furthermore, she serves as the writer and producer of YouTube comedy channel ‘JASH’ which premiered on March 10, 2013.
She starred alongside Patti LuPone and Topher Grace in Lorne’s situation comedy pilot titled ‘People in New Jersey.’ However, it was not picked up for a series order.
In 2014, she was part of Seth MacFarlane’s directorial venture ‘A Million Ways to Die in the West’ where she appeared alongside Charlize Theron and Liam Neeson. She also had a recurring role in the ‘Showtime’ period drama series ‘Masters of Sex.’
In 2017, she started hosting the ‘Hulu’ late night web television show ‘I Love You, America with Sarah Silverman.’ The following year, she was part of the film ‘Ralph Breaks the Internet.’
Continue Reading Below
She featured in a number of music videos alongside ‘Maroon 5’ and Cardi B. She also guest starred in a number of TV series, including ‘Lady Dynamite,’ ‘Crashing,’ and ‘Crank Yankers.’
In 2019, she was cast to play ‘Parker Debbs’ in Kat Coiro's American romantic comedy film ‘Marry Me’ which has Jennifer Lopez and Owen Wilson playing lead roles. 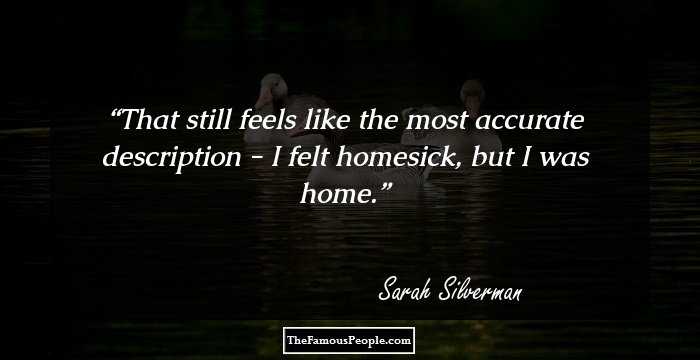 Quotes: Like, Home, I
Awards & Achievements
She won an ‘Emmy Award’ for ‘Outstanding Music and Lyrics’ for the song ‘I’m Fucking Matt Damon.’
She has also won the ‘Primetime Emmy’ for her writing skills. She won the award under ‘Outstanding Writing for a Variety Special’ category for ‘Sarah Silverman: We are Miracles.’
Personal Life & Legacy
She lives in Los Angeles, California.
She is a vegan and non-alcoholic. Though Jewish by birth, she is an agnostic by belief.
She has been romantically linked with various actors and co-stars, including Dave Attell, Colin Quinn, and Tom. Her affair with Jimmy Kimmel lasted for five years. The couple split only to reconcile for a year before parting ways again.
She then dated American television writer Alec Sulkin for a few months before breaking up with him. She was in a relationship with comedian Kyle Dunnigan from 2011 to 2013.
In 2014, she started a relationship with Welsh actor Michael Sheen. Unfortunately, the couple separated four years later.
Sarah, who was suffering from epiglottitis, was admitted to ‘Cedars Sinai Hospital’ where she spent a week in the intensive care unit in July 2016. 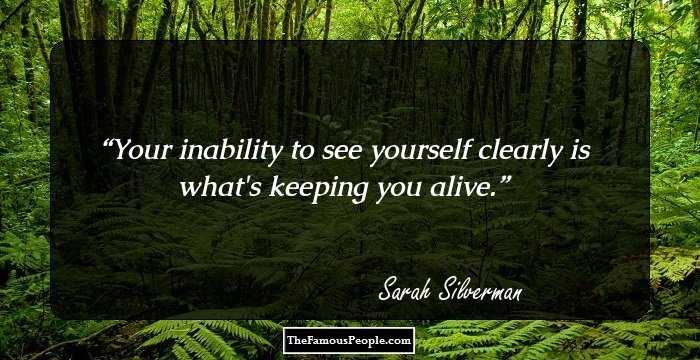 Quotes: You, Yourself
Trivia
She released the song ‘I’m Fucking Matt Damon’ on her then boyfriend Jimmy Kimmel’s show ‘Jimmy Kimmel Live!’ and the song became an instant hit.

Quotes By Sarah Silverman | Quote Of The Day | Top 100 Quotes

See the events in life of Sarah Silverman in Chronological Order