Michael Christopher Sheen is a famous Welsh actor renowned for his works in both stage productions and films. During the early years of his career, he worked mainly in theatre as he felt "slightly more at home" on the stage than on film sets. He is well-known for his brilliant performances in plays like ‘Romeo and Juliet,’ ‘Don't Fool With Love,’ ‘Peer Gynt,’ ‘The Seagull,’ ‘The Homecoming,’ and ‘Henry V.’ For one year, he played the title role in ‘Hamlet.’ Theatre critic Michael Coveney described him as “the most exciting actor of his generation...a volatile, electrifying and technically fearless performer.” He was nominated for ‘Olivier Awards’ for his performances in ‘Amadeus,’ ‘Caligula,’ ‘Look Back in Anger,’ and ‘Frost/Nixon.’ Director Sam Mendes described him as "a stage creature" and attributed his talent to his Welsh roots. He became well-known as a screen actor from 2000, and did a number of biopics. He played British politician Tony Blair in the television film ‘The Deal,’ for which he was nominated for ‘BAFTA’ and an ‘Emmy’ award. He was also nominated for a ‘BAFTA’ for his performance in ‘Fantabulosa!’ Besides acting, he directed the play ‘The Passion,’ and co-founded the ‘Thin Language Theatre Company.’ He also formed ‘The Foundry,’ a production company, to promote the work of emerging playwrights. British People
Welsh People
Actors
British Men
Welsh Men
Royal Academy Of Dramatic Art
Childhood & Early Life
Michael Sheen was born on February 5, 1969, in Newport, Wales, to Irene Thomas and Meyrick. His mother was a secretary and father, a ‘British Steel Corporation’ manager. He has a younger sister named Joanne. When he was five, the family moved to Wallasey and after three years, moved to Port Talbot and settled there.
He attended ‘Blaenbaglan Primary School’ and ‘Glan Afan Comprehensive School.’ At ‘Neath Port Talbot College,’ he studied English, sociology, and drama.
He was a good footballer and was offered a place in Arsenal's youth team when he was 12. He could not accept the offer as his family refused to relocate to London. He soon lost interest in playing football.
He inherited his acting talent from his parents, who were both involved in local amateur operas and musicals. His father also worked as a professional Jack Nicholson look-alike.
During his teenage years, he started performing with ‘West Glamorgan Youth Theatre’ and ‘National Youth Theatre of Wales.’ These youth theatres taught him the nuances of acting as well as work ethics.
In 1988, he attended the ‘Royal Academy of Dramatic Art’ (RADA). He also worked in a fast food restaurant to earn money to fund his studies. In his second year at ‘RADA,’ ‘The Society of London Theatre’ granted the ‘Laurence Olivier Bursary’ to him. In 1991, he graduated with a BA in acting. 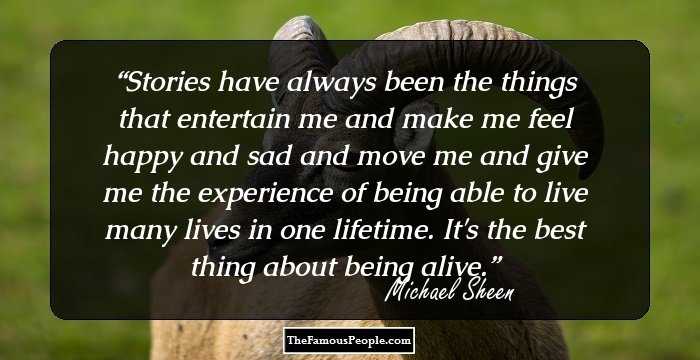 Continue Reading Below
Career
Michael Sheen mainly worked in theatres during the initial years of his career. In 1991, while he was still in his final year at ‘RADA,’ he performed his first professional role in ‘When She Danced’ at the ‘Globe Theatre.’
In 1992, he appeared in the play ‘Romeo and Juliet,’ and ‘Don't Fool With Love’ the following year. In 1993, he also appeared in Harold Pinter's ‘Moonlight’ and made his television debut in ‘BBC’ mini-series ‘Gallowglass.’
In 1994, he landed the title role in the play ‘Peer Gynt.’ In the same year, he performed in ‘Le Livre de Spencer’ at a Paris theatre, and appeared in ‘Charley's Aunt’ at the ‘Royal Exchange.’
He acted in the play ‘The Seagull’ in 1995, and also directed and starred in ‘The Dresser.’ The same year, he made his film debut in ‘Othello,’ starring opposite Kenneth Branagh.
In 1996, he appeared in ‘The Ends of the Earth.’ His most significant stage performance so far came in 1997 when he played the title role in ‘Henry V.’ In the same year, he appeared in Harold Pinter's ‘The Homecoming.’ In 1997, he also appeared in the biographical film ‘Wilde’ where he played Robbie Ross.
In 1998, he co-founded a production company called ‘The Foundry’ to promote the works of new playwrights. Subsequently, he produced ‘A Little World of Our Own’ at the ‘Donmar Warehouse.’ From 1998 to 1999, he portrayed Mozart in ‘Amadeus.’ In 1999, he played Jimmy Porter in ‘Look Back in Anger.’
From 2002, Michael Sheen began devoting more time to films. His portrayal of Colin in ‘Heartlands’ in 2002 was his first leading film role. In the same year, he did a minor role in ‘The Four Feathers,’ an action-adventure film. In 2003, he appeared in ‘Bright Young Things,’ in which he played a gay aristocrat.
He then portrayed the werewolf leader Lucian in ‘Underworld,’ and played a brief role in the sci-fi film ‘Timeline.’ In 2003, he played the title role in the play ‘Caligula’ at the ‘Donmar Warehouse.’
In 2004, he starred in ITV's comedy film ‘Dirty Filthy Love.’ He was internationally recognized in 2006 for his portrayal of Tony Blair in ‘The Queen.’ The same year, he played the role of an unscrupulous diamond dealer in ‘Blood Diamond’ and also starred as the comic actor Kenneth Williams in BBC Four's ‘Fantabulosa!’ He also starred in ‘Nero in Ancient Rome: The Rise and Fall of an Empire’ and played the title role in ‘HG Wells: War with the World.’
Continue Reading Below
From 2006 to 2007, he was featured in the play ‘Frost/Nixon’ as the television broadcaster David Frost. In the same year, he appeared in the film ‘Music Within’ as a political activist.
In 2008, he reprised his role as David Frost in the film ‘Frost/Nixon.’ In 2009, he portrayed football manager Brian Clough in ‘The Damned United.’ The same year, he also appeared in ‘Underworld: Rise of the Lycans.’
In 2010, he played a supporting role in the science fiction film ‘Tron: Legacy.’ In the same year, he appeared as a terrorist in ‘Unthinkable.’ He also performed in Peter Morgan's ‘Blair’ trilogy, ‘The Special Relationship.’
In 2011, he served as the creative director and also starred in the stage production of ‘The Passion.’ Besides the professional cast, about 1000 local amateurs performed in the play! One of his most notable performances also came that year when he played a supporting role in the fantasy comedy ‘Midnight in Paris.’
The same year, he played a series of cameo roles in movies like ‘The Twilight Saga: Breaking Dawn – Part 1’ and ‘Resistance.’ He also appeared in the drama movie ‘Beautiful Boy.’
Sheen then played the title role in ‘Hamlet’ for about a year from late 2011 to early 2012, garnering praises for his fabulous performance. From 2013 to 2014, he played prominent roles in films like ‘Admission’ and ‘Mariah Mundi and the Midas Box.’ He also appeared in the parody mini-series ‘The Spoils of Babylon.’
In 2015, Sheen was cast opposite Carey Mulligan in the romantic drama ‘Far from the Madding Crowd’ where he played a prosperous bachelor named William Boldwood. His performance as the suave Boldwood had the critics raving about his performance, calling it ‘fine-grained’ and ‘heartrending.’ That year, he also made his presence felt in television by playing roles in ‘Comedy Bang! Bang!,’ ‘The Spoils Before Dying,’ and ‘7 Days in Hell.’
From 2013 to 2016, Sheen produced and starred in Showtime’s period drama series ‘Masters of Sex,’ opposite Lizzy Caplan, for which he received a ‘Golden Globe’ nomination. In 2016, he had supporting roles in movies like ‘Nocturnal Animals,’ ‘Norman: The Moderate Rise and Tragic Fall of a New York Fixer,’ and voiced a character in the fantasy adventure ‘Alice Through the Looking Glass.’
From 2017, Sheen shifted his focus towards television, portraying roles, such as the unconventional lawyer Roland Blum in the TV series ‘Good fight.’ He also played a role in the miniseries ‘Good Omens,’ alongside David Tennant.
Continue Reading Below 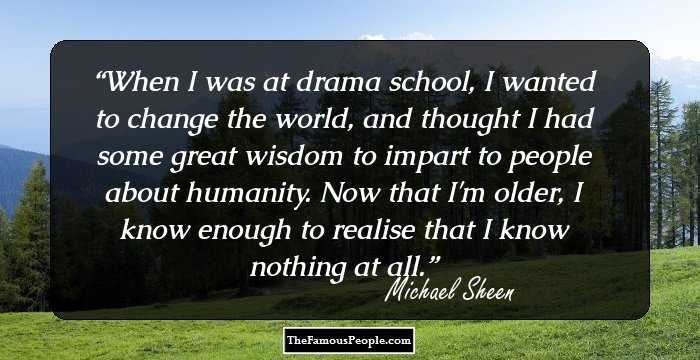 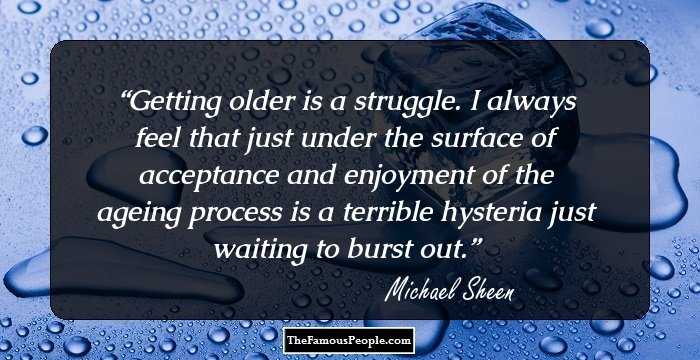 Personal Life
From 1995 to 2003, Michael Sheen was in a relationship with actress Kate Beckinsale. Their daughter, Lily Mo Beckinsale-Sheen, was born in 1999.
He had a long-distance relationship with ballet dancer Lorraine Stewart from 2004 till 2010. He also once dated Canadian actress Rachel McAdams. In 2014, he dated American actress Sarah Silverman.
He is currently dating Swedish actress Anna Lundberg. In 2019, he announced that his girlfriend Lundberg is pregnant with his child.
He is the honorary president of ‘Wales Council for Voluntary Action,’ and the ambassador for ‘TREAT Trust Wales.’ He is also the ambassador for ‘Keep Wales Tidy.’ He is a patron of the charities, ‘Scene & Heard,’ ‘Child's Voice Appeal,’ ‘Healing the Wounds, ‘The Relationship Centre,’ and ‘WGCADA.’
He is a patron of the ‘British Independent Film Awards’ and ‘Social Enterprise UK.’ He is also an ambassador for the ‘Dylan Thomas Prize.’ He is the vice-president of ‘Port Talbot Town FC’ and ‘Royal Society for Public Health.’

Quotes By Michael Sheen | Quote Of The Day | Top 100 Quotes

See the events in life of Michael Sheen in Chronological Order