Sarah Ann McLachlan is a Canadian singer, songwriter and musician. She was born and brought up in Canada and took to music and singing from a very young age. She became a part of a local band even before she finished school, which eventually got her an offer from a recording company in Vancouver to sign a contract. McLachlan finished her studies and shifted to Vancouver to work on her music career. It was in the late 1980s that her first album ‘Touch’ came out and she became an instant hit in Canada. From there onwards she recorded and released many albums which soon made her into an international phenomenon. McLachlan has given around seven hit albums and recorded songs for movies like ‘City of Angels’, ‘Toy Story 2’, etc. After getting frustrated over the fact that two or more female artists were not sponsored to perform on the stage, she founded ‘Lilith Fair’ and sponsored all-female music concerts and festivals. She has received many awards and accolades, which includes: 8 Juno Awards, 2 Grammy Awards. She was appointed as an Officer of the ‘Order of Canada’ for her successful recording career, helping other female artists to progress in the industry and general charitable donations. Celine Dion
DID WE MISS SOMEONE?
CLICK HERE AND TELL US
WE'LL MAKE SURE
THEY'RE HERE A.S.A.P
Quick Facts

Canadian People
Pop Singers
Rock Singers
Lyricists & Songwriters
Canadian Women
Childhood & Early Life
Sarah McLachlan was born on January 28, 1968 in Halifax, Nova Scotia, Canada. Since she was a little girl she had interest in music and showed signs of growing up to become a brilliant singer. She took lessons in voice and piano and learnt classical music as well.
She studied at the Queen Elizabeth High School and while she was still in the school she became a part of a rock band called ‘The October Game’. She was offered a music contract but her parents insisted on her finishing the school first.
She completed her studies at the Nova Scotia College of Art and Design and moved to Vancouver where she signed a contract with the recording label ‘Nettwerk’. 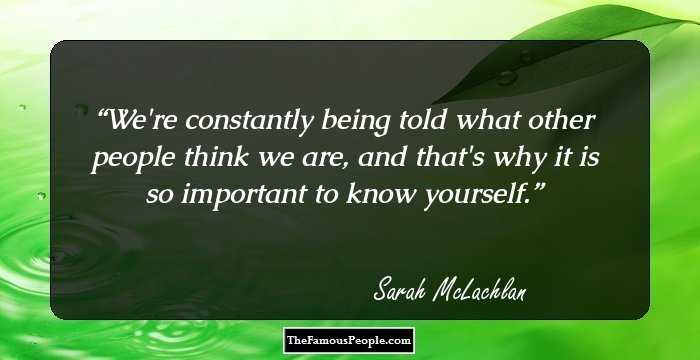 Quotes: Think, Yourself
Continue Reading Below
Career
In 1988, McLachlan recorded her first album ‘Touch’ after she moved to Vancouver, British Columbia, to work with the label company ‘Nettwerk’. The album had the hit single ‘Vox’ and did very well commercially and critically.
After the release and success of her first album, McLachlan embarked on the first musical tour of her life. It was a national concert tour, an opening act for ‘The Grapes of Wrath’.
In 1991, McLachlan released her second album called ‘Solace’, the breakthrough album of her career. It included the hit singles like: ‘The Paths of Thorns’ and ‘Into the Fire’. She collaborated with Pierre Marchand for the first time for this album.
In 1993, her third album ‘Fumbling Towards Ecstasy’ came out and became an instant hit with the Canadian audience. Within the period of next two years, this album also became McLachlan’s ticket to international fame.
In 1996, McLachlan founded a tour called ‘Lilith Fair’ and gave out performances with female artists like Cole, Lisa Loeb and Michelle McAdorey. The reason for forming ‘Lilith Fair’ was McLachlan’s frustration with concert promoters and radio stations as they refused to feature two female musicians in a row. Bucking conventional industry wisdom, she booked a successful tour for herself and Paula Cole.
In 1997, she came out with her fourth album ‘Surfacing’, which is considered to be the best selling and highly acclaimed album of her career. She won 2 Grammys for the album and also bagged 4 Juno Awards.
In 1998, the popular Hollywood movie ‘City of Angels’ included McLachlan’s hit single ‘Angel’ from her successful album ‘Surfacing’. The soundtrack became such a massive hit all over the world that it earned multiple-platinum status.
In 1997, McLachlan’s ‘Lilith Fair’ did very well and became one of the top earning touring festivals in that year. It was considered as the most triumphant all-female music festival in the history of world music.
In 1999, McLachlan released her fifth album ‘Mirrorball’, which included the cover version of ‘I Will Remember You’. She also recorded a song that year for the animated movie ‘Toy Story 2’, which got nominated for an Oscar.
Continue Reading Below
In 2001, McLachlan gave vocals and music for the track ‘Love Is’ for Stevie Nick’s ‘Trouble in Shangri-La’ and drew the graphics for the cover of his album. She also did a duet with Bray Adams for his album ‘Spirit: Stallion of the Cimarron’.
In 2003, she released her sixth album ‘Afterglow’, after staying away from music productions and tours for some time and giving birth to her first daughter. It included singles like: ‘Fallen’, ‘Stupid’, ‘World on Fire’, etc.
In 2004, she released the live album from the ‘Afterglow’ concert, called ‘Afterglow Live’. It included the full-length live concert on a CD and DVD and also included three videos from ‘Afterglow’ album.
In 2006, she came out with her sixth album, a Christmas collection, ‘Wintersong’. She included 11 of her new songs in the album and it sold about 1.1 million copies around the world. It was nominated for a Grammy and Juno Award.
Around the same time, McLachlan recorded a song for the animated movie ‘Charlotte’s Web’, ‘Ordinary Miracle’. She also did a live album re-release for her album ‘Miorrorball’ as ‘Mirrorball: The Complete Concert’.
In 2008, her greatest hits album ‘Closer: The Best of Sarah McLachlan’ was released. During the same time, a 15th anniversary edition of ‘Fumbling Towards Ecstasy’ was also released by the Legacy Recordings.
In 2010, McLachlan released her first studio album ‘Laws of Illusion’, including 10 original tracks and several bonus tracks. In the same year, she performed the song ‘Ordinary Miracle’ at the 2010 Winter Olympics, Vancouver. 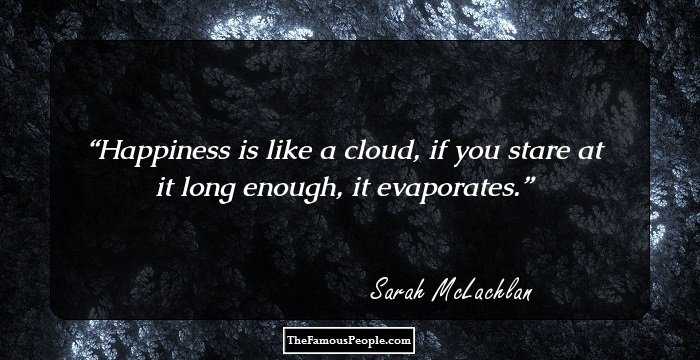 Quotes: You, Like, Happiness
Awards & Achievements
In total, McLachlan has been nominated for 21 Juno Awards and received 8 out of them in the categories of ‘Best Music Video’, ‘Female Vocalist of the Year’, ‘Songwriter of the Year’, ‘Single of the Year’, etc.
Continue Reading Below
She has received three Grammy Awards until now: ‘Best Female Pop Vocal Performance’ for ‘Building a Mystery (1997)’ and ‘I Will Remember You (1999)’ and ‘Best Pop Instrumental Performance’ for ‘Last Dance (1997)’.
She has also been the winner of Elizabeth Cady Station Visionary Award for taking the career of women in music further with her ‘Lilith Fair’. She was also appointed as an Officer of the ‘Order of Canada’.
Personal Life & Legacy
McLachlan got married to her drummer Ashwin Sood in 1997 in Jamaica. They have 2 daughters together, India Ann, Sushil Sood and Taja Summer Sood. The couple announced their separation in September 2008 after being married for almost 11 years. 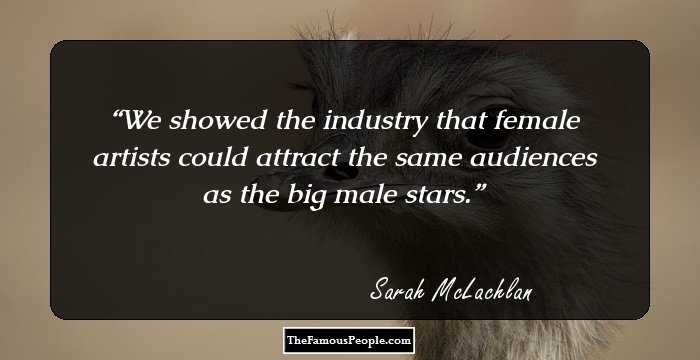 Trivia
McLachlan’s mother died of cancer in 2001, around the same time when she was pregnant with her first daughter.
She gave birth to her second daughter while she was in the process of producing her album ‘Afterglow’ in 2007.
McLachlan had a fan-stalker called Uwe Vandrei, who filed a lawsuit against her stating that her song ‘Possession’ was inspired by the obsessed letters that he used to write to her. He committed suicide just before the trial.
McLachlan’s high school yearbook made a forecast that she will one day become a massive rock star.
McLachlan created the Sarah McLachlan Music Outreach Program for the purpose of providing free music education classes to the youths.

Quotes By Sarah McLachlan | Quote Of The Day | Top 100 Quotes

See the events in life of Sarah McLachlan in Chronological Order