Sanjay Gupta is an American neurosurgeon, medical reporter and author. He is presently associated with the Grady Memorial Hospital in Atlanta, Georgia, as associate chief of the neurosurgery service, and with Emory University School of Medicine as associate professor of neurosurgery. He also serves as chief medical correspondent for CNN and as a special correspondent for CBS News. He is a member of the National Academy of Medicine and American Academy of Arts and Sciences. Over the years, he has earned recognition featuring and contributing on several television shows on health and medical related issues. These include hosting the CNN aired medical-centric news program Sanjay Gupta MD that earned him several Emmy Awards; and featuring on many other CNN television shows and specials like CNN Tonight, American Morning, Anderson Cooper 360° and Larry King Live. He often featured on different CNN shows during the 2020 coronavirus pandemic and provided information about the illness and later on the COVID-19 vaccines. He has also earned an Emmy Award for Outstanding Feature Story in a Regularly Scheduled Newscast for the reports he made on the situation of Charity Hospital, New Orleans, Louisiana, following Hurricane Katrina. Thus far, he has authored four books including Chasing Life and Cheating Death. David H. Hubel
DID WE MISS SOMEONE?
CLICK HERE AND TELL US
WE'LL MAKE SURE
THEY'RE HERE A.S.A.P
Quick Facts 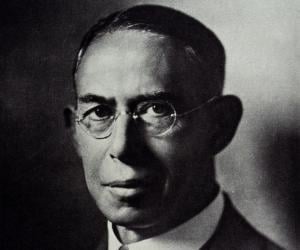 Sanjay Gupta was born on October 23, 1969, in Novi, Michigan, US, to Subhash and Damyanti Gupta. Damyanti was born in Tharushah in Sindh (presently Pakistan) and fled to India when she was just five during the Partition of India. Sanjay’s parents emigrated from India during the 1960s and met each other in Livonia, Michigan. Both of them served there as engineers for Ford Motor Company with Damyanti becoming the first female engineer who was inducted by the company. Sanjay has a younger brother called Suneel

During his undergraduate days, Sanjay became a member of the Men's Glee Club and president of the Indian American Students Association (IASA) and remained associated with the freshman orientation program as an orientation leader. He wrote and reported on health care issues for the university’s newspaper. He also penned down articles on medical care in the US and other countries that were published in The Economist and caught attention of Bill Clinton, the then governor of Arkansas and his wife, Hillary Clinton, leading Sanjay to meet the couple in 1989. In 1997, Sanjay received a White House Fellowship while Bill Clinton was serving his second term as the President of the United States. Sanjay was selected as one of fifteen White House Fellows and his main task was to serve the first lady Hillary Clinton as an advisor in writing speeches on medicine and health care issues.

In 2000, he finished his residency in neurological surgery in the University of Michigan Health System and thereafter did a fellowship at the Semmes Murphy Clinic, in Memphis, Tennessee. 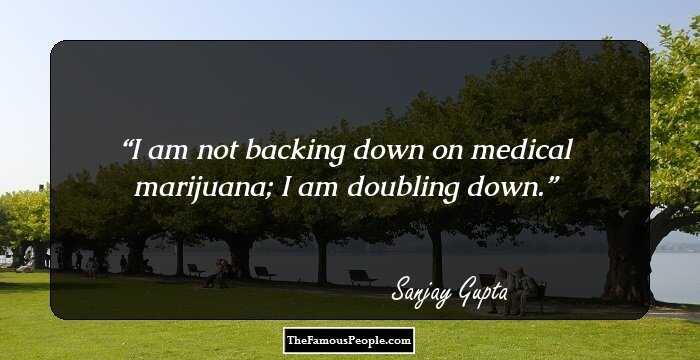 Sanjay holds office as associate professor of neurosurgery at the Emory University School of Medicine and as associate chief of the neurosurgery service at Grady Memorial Hospital in Atlanta. He has worked on trauma, spine, and 3‑D‑image-guided surgeries. Medical journal articles written by him include those on percutaneous pedicle screw placement, spinal cord abnormalities and brain tumours.

According to an announcement made by CNN on January 6, 2009, Sanjay received an offer to assume office as Surgeon General of the United States during the Barrack Obama administration. Sanjay however withdrew his name from consideration in March that year.

One of his notable reporting works includes leading CNN's coverage of the catastrophic January 2010 Haiti earthquake with CNN journalist and news anchor Anderson Cooper. During such tenure, he was contacted from the United States Navy’s aircraft carrier USS Carl Vinson and was informed that a 12 years old girl, an earthquake victim, required a neurosurgeon. Sanjay along with Haitian-American paediatric surgeon Henri Ford, and two doctors of the U.S. Navy performed an operation aboard the Vinson and removed a piece of concrete from the skull of the girl.

He mentioned in a 2013 editorial that while working on a documentary on marijuana he adopted a different opinion from the one he held earlier on risks and benefits of drugs. Although he expressed his disapproval against the laws that permitted patients access to medical marijuana, he later changed his mind and apologized for his previous stance. 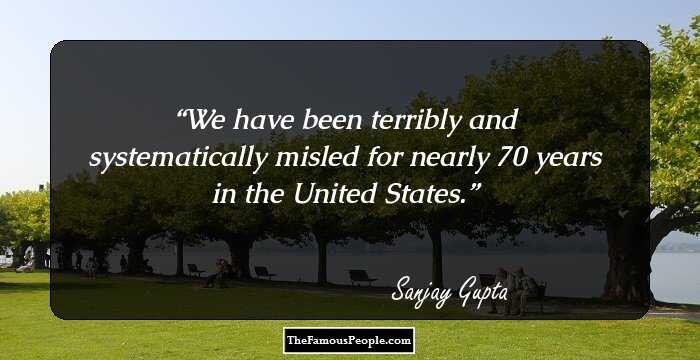 During his tenure as a White House Fellow, Sanjay got introduced to American journalist, media executive and then president of CNN Tom Johnson. In the summer of 2001, Sanjay accepted an offer to join the medical news team of CNN. He went to New York following the September 11, 2001, attacks on the US and reported on the incident and on the subsequent anthrax attacks.

He went to Iraq in 2003 following the United States led invasion of Iraq and reported on the medical aspects of such invasion. While there, he provided live coverage from a military operating room and also performed emergency surgery on injured soldiers as well as on Iraqi civilians which included a crucial brain surgery of a severely injured Iraqi child. During such tenure, Sanjay was attached with a US Navy medical unit, particularly with a Corpsman team known as the Devil Docs that provided support to the 1st Marine Expeditionary Force.

In 2004, he reported on AIDS and in 2005 on the situation of Charity Hospital, New Orleans, Louisiana, where around 200 patients were trapped without power or fresh water for five days following Hurricane Katrina. His reports on the latter won him an Emmy Award for Outstanding Feature Story in a Regularly Scheduled Newscast in 2006.

CBS News president Sean McManus struck a deal with CNN in December 2006 according to which Sanjay would provide up to 10 reports a year for the CBS Evening News with Katie Couric and 60 Minutes while continuing his service as chief medical correspondent of CNN and as associate chief of neurosurgery at Grady Memorial Hospital.

In April 2007, Sanjay published the self-help book titled Chasing Life: New Discoveries in the Search for Immortality to Help You Age Less Today. It was later adapted into a six-show TV miniseries in April 2019, on CNN and saw Sanjay travelling around the world including in India, Japan, Norway, Bolivia, Italy and Turkey to find out the secrets for living a better and happy life.

A fact-check segment by Sanjay on American documentary filmmaker, author and left-wing activist Michael Moore’s 2007 released American political documentary film Sicko was aired on CNN's The Situation Room on July 9, 2007. In the segment, Sanjay said that Moore had "fudged facts". Following this, Moore gave a live interview to Wolf Blitzer on CNN where he mentioned that the report of Sanjay was not accurate and was biased. Moore also gave a comprehensive response on this on his website. Sanjay and Moore debated on the subject on Larry King Live on July 10, 2007, following which Sanjay posted a message on his position on the documentary film as also on CNN's coverage.

Sanjay guest-hosted a health episode of CBS News Sunday Morning on October 14, 2007. He along with Cooper and biologist and wildlife conservationist Jeff Corwin hosted the two-part, four-hour documentary titled Planet in Peril on CNN that premiered on October 23, 2007. Its sequel called Planet in Peril: Battle Lines premiered on CNN on December 11, 2008, and featured Sanjay and Anderson besides Lisa Ling from National Geographic Explorer.

Sanjay reported on the White House Health Summit as host of Anderson Cooper 360° in February 2009 and guest hosted Larry King Live in October same year. That year he also published his next book Cheating Death: The Doctors and Medical Miracles that Are Saving Lives Against All Odds. He has regularly featured on shows like The Late Late Show with Craig Ferguson, the Late Show with David Letterman, Real Time with Bill Maher, The Daily Show with Jon Stewart and the Oprah Winfrey Show; and often appears and contributes on CNN shows like Anderson Cooper 360°, American Morning, CNN Tonight and Larry King Live.

He featured as himself in the September 2011 released blockbuster hit American medical thriller film Contagion that garnered renewed popularity after the emergence of the COVID-19 pandemic.

In March 2012, he published the novel Monday Mornings that soon became a New York Times bestseller. He contributed as an executive producer of the TNT aired American medical drama television series Monday Mornings (2013) that was based on the novel.

He co-produced the feature-length documentary Unseen Enemy for CNN in 2017. It explored on how lurking viruses and bacteria may pose a threat in creating a global pandemic in the 21st century.

Sanjay along with Marc Hodosh, co-Creator of TEDMED, made an announcement in September 2019 that they would work in partnership with CNN and contribute as hosts and organizers of the health conference called Life Itself. In October that year, Sanjay was elected to the National Academy of Medicine.

Sanjay also drew criticism for the quality of his reporting from some journalists and professors of journalism specializing in health care including Trudy Lieberman and Gary Schwitzer. He was also criticised and accused by some medical journalists like Peter Aldhous for supporting extensive electrocardiogram and prostate cancer screening, although the US Preventive Services Task Force and other medical authorities does not favour it.

He became a member of the American Academy of Arts and Sciences in 2021. He served as one of the guest hosts of the Merv Griffin created American game show Jeopardy! from June 28 to July 9 that year. Same year he published his books Keep Sharp: Build a Better Brain at Any Age and World War C: Lessons from the COVID-19 Pandemic and How to Prepare for the Next One through Simon & Schuster. Franklin Pierce University awarded him with the Fitzwater Medallion for Leadership in Public Communication on October 6, 2022.

In 2003, his name was included in the People magazine's list of Sexiest Men Alive. He mentioned in an interview with David Hochman for Playboy that he plays the accordion on which he took lessons for 10 years.

Sanjay married family law attorney Rebecca Olson in a Hindu wedding ceremony in 2004. The couple reside in Atlanta with their three daughters. 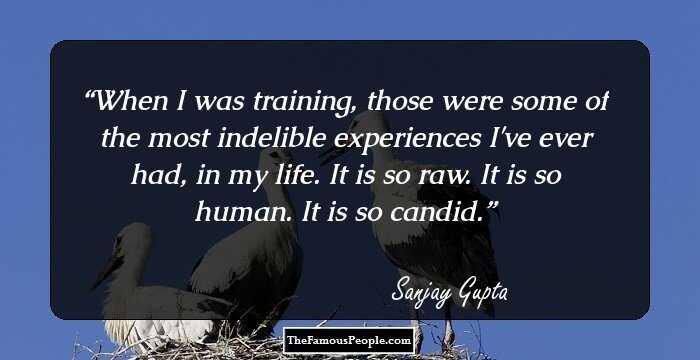 See the events in life of Sanjay Gupta in Chronological Order