Hector Hugh Munro, better known by the pen name Saki, was a witty British writer. The inspiration behind his pen name ‘Saki’ is unknown. He is regarded as one of the greatest short story writers and compared to greats such as O. Henry and Dorothy Parker. Munro was greatly influenced by the writings of Oscar Wilde, Rudyard Kipling and Lewis Carroll. His stories were initially published in newspapers and later collected into several volumes. Apart from short stories, Munro also wrote a full-length play, two one-act plays, a historical study, a short novel etc. He influenced great writers such as A. A. Milne, Noel Coward and P. G. Wodehouse. When he was in his early 20s, Munro went to Burma (Myanmar) to join the Colonial Burmese Military Police but he had to return back to England later due to ill-health. Thereafter, he embarked on his career as a journalist. He wrote for various publications including the Daily Express, the Bystander, The Morning Post and the Outlook

Rudyard Kipling
Short Story Writers #26
Writers #316
Continue Reading Below
DID WE MISS SOMEONE?
CLICK HERE AND TELL US
WE'LL MAKE SURE
THEY'RE HERE A.S.A.P
Quick Facts

British Celebrities
Short Story Writers
British Men
Male Writers
British Writers
Childhood & Early Life
Hector Hugh Munro was born on December 18, 1870 in Akyab, British Burma, to Charles Augustus Munro and Mary Frances Mercer.
His father was Inspector General for the Indian Imperial Police, and his mother was the daughter of Rear Admiral Samuel Mercer.
In 1872, when he was just two, his mother left for heavenly abode and his father sent him and his sister to England, to stay with his grandmother and aunts.
He received his education Pencarwick School in Exmouth and was then send to Bedford School where he stayed in a hostel.
In 1893, Hector joined the Indian Imperial Police and in Burma, but ill-health forced him to return to England after two years.
At the beginning of World War I, he joined as an ordinary trooper at the 2nd King Edward’s Horse though at that time he was already 43 years old and was over age.
He later became a lance sergeant in the 22nd Battalion of the Royal Fusiliers. 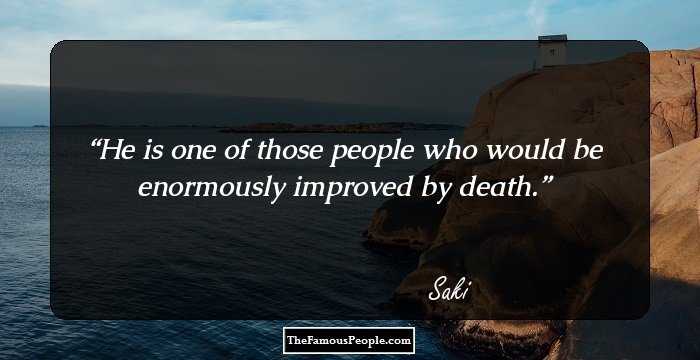 The Sexiest Men Of 2020, Ranked
Career
He kicked off his writing career as a journalist for newspapers such as Morning Post, Westminster Gazette and Daily Express. He worked as a journalist for Outlook and Bystander magazines as well.
In 1900, his first book, titled ‘The Rise of the Russian Empire’ made its appearance. This was inspired by ‘The Decline and Fall of the Roman Empire’ by Edward Gibbon.
During 1902 – 1908, he went to the Balkans, Warsaw and Russia to work as a foreign correspondent for the Morning Post.
In 1902, he wrote a political sketch, titled ‘The Women who Never Should’ followed by two more political sketches in the same year, titled ‘The Westminster Alice’ and ‘The Not So Stories’.
Saki was considered to be the master of short stories. In 1904, his short stories, titled ‘Reginald’ were published. This was followed by a series of short stories that were published from 1904-1911 that included ‘Reginald’ in Russia, in 1910 and ‘The Chronicles of Clovis’ in 1911.
His first was published in 1912 and was titled ‘The Unbearable Bassington’.
In 1913, sometime before the World War I, he wrote a “what if novel”, ‘When William Came: A Story of London Under the Hohenzollerns’.
There are a number of posthumous works in his name which include short stories titled ‘The Toys of Peace’ in 1919, ‘The Square Egg and Other Sketches’ in 1924.
He had also written a play that was co-authored with Charles Maude and was published in 1924.
Continue Reading Below
In 1926-1927, 8 volumes of “The Works of Saki” were published. In 1930, the Complete Short Stories of Saki were published.
From 1950 to 2010, a number of Saki’s works have been published that include “The Miracle Merchant”, a one act play, “A Shot In The Dark” (a compilation of 15 uncollected stories) and “Improper Stories” in 2010. 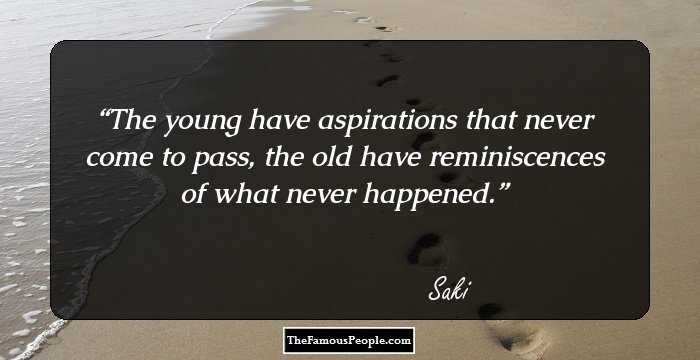 Quotes: Never, Young
Achievements
Saki’s plays and stories have also been adapted as TV series and plays. In 2007, three of his stories - “The Storyteller", "The Lumber Room" and "Sredni Vashtar” were showcased in BBC TV production show Who Killed Mrs De Ropp?
“Saki: The Improper Stories of H. H. Munro” was an eight-part series produced for Granada Television in 1962.
His stories have also been adapted into theatre plays such as ‘Saki Shorts’, ‘The Playboy of the Week-End World’, ‘Miracles At Short Notice’ and ‘Wolves At The Window’.
Personal Life & Legacy
Munro had three siblings and after their mother’s death they all stayed with their grandmother in England.
It is said that Munro was homosexual, but as this was considered a crime in Britain of those days, this side of Munro was kept a secret.
He was killed during the World War I by a German sniper on the Western Front.
Munro was showed respect on Pier and Face 8C 9A and 16A of the Thiepval Memorial.
There is no grave of Munro.
Munro’s flat serves as a historical marker as it was marked blue plaque by the English Heritage in 2003. 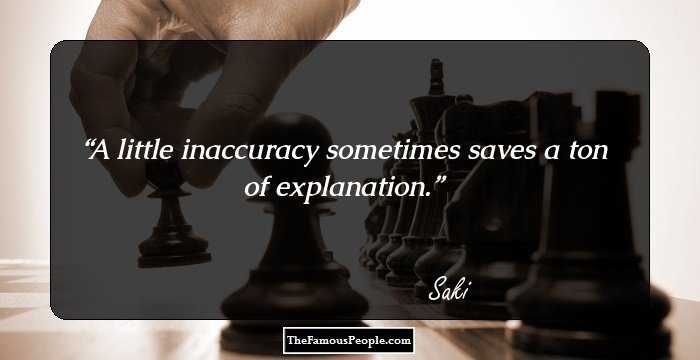 See the events in life of Saki in Chronological Order 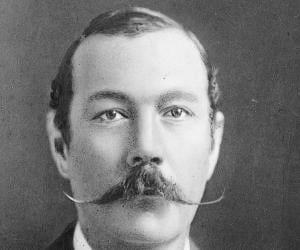