(English Author Known for Her Detective Novels and Short Stories)

Advanced Search
Agatha Christie, known as the ‘Queen of Crime,’ was a renowned English writer who wrote over 66 detective novels. She is best known as the creator of Belgian detective ‘Hercule Poirot’ and village lady ‘Miss Marple.’ She is credited for writing the world’s longest running play ‘The Mousetrap.’ Her first successful publication was ‘The Mysterious Affair at Styles’ which introduced her character ‘Poirot.’ According to ‘Index Translationum,’ her books have been translated into 103 different languages, and her works rank third after the works of William Shakespeare and the Bible, as the world’s most widely published books. Her novel ‘And Then There Were None’ deserves special mention as her best-selling novel. Around 100 million copies of the novel have been sold till now. For her noteworthy contribution in the field of detective stories, she received several awards, such as ‘Grand Master Award’ and ‘Edgar Award.’ A number of films, television series, video games, and comics have been made based on her stories. Her character ‘Poirot’ is the only fictional character for which ‘The New York Times’ published an obituary, which is a clear indication of the character’s popularity. Image Credit
https://commons.wikimedia.org/wiki/File:Agatha_Christie_as_a_child_No_1.jpg
(The press-materials are presumed to have been distributed by Dodd, Mead Publishing House, which was the publisher of the book. / Public domain) C. S. Lewis
DID WE MISS SOMEONE?
CLICK HERE AND TELL US
WE'LL MAKE SURE
THEY'RE HERE A.S.A.P
Quick Facts

British Celebrities
Short Story Writers
British Women
Virgo Writers
Women Writers
Childhood & Early life
Hailing from an upper middle class family of Devon, Agatha Christie was born Agatha Mary Clarissa Christie on 15 September 1890, in South West England, to Frederick Alvah Miller and Clara Boehmer.
She spent her childhood in a happy environment, surrounded by strong and independent women. On the insistence of her mother, she received home education on arithmetic. She also learnt to play the piano and mandolin at home.
In 1901, her family went through financial crisis after her father’s death. The sad demise of her father ended her happy childhood. She started living with her mother in their Torquay home.
In 1902, she took admission at ‘Miss Guyer’s Girls School’ in Torquay, but could not continue her education in the school.
In 1905, she went to Paris, France where she studied singing and piano at ‘Mrs Dryden’s finishing school.’ 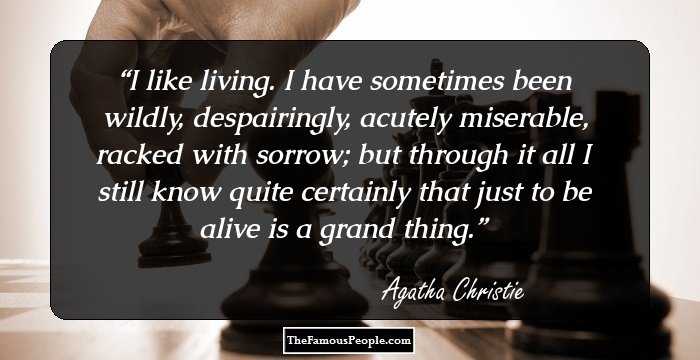 Quotes: Like, Living, I
Continue Reading Below
Career
Her first short story was ‘The House of Beauty’ which described the world of ‘madness and dreams.’ She continued writing short stories that showcased her interest in spiritualism and paranormal activities.
She wrote a novel titled ‘Snow Upon the Desert’ which she sent to some publishers under the pseudonym Monosyllaba. Unfortunately, the publishers were reluctant to publish her works.
During ‘World War I’ in 1914, Agatha joined the ‘Voluntary Aid Detachment.’ During her service there, she attended to injured soldiers at a hospital in Torquay, England.
From October 1914 to December 1916, she dedicated her time by doing 3,400 hours of unpaid work.
From December 1916 until the end of her service in September 1918, she earned £16 a year as a dispenser.
She was an avid reader of detective novels of prominent authors like Sir Arthur Conan Doyle. Drawing inspiration from such novels, she wrote the detective novel ‘The Mysterious Affair at Styles’ which housed the popular character ‘Hercule Poirot.’
In October 1920, John Lane at ‘The Bodley Head’ agreed to publish ‘The Mysterious Affair at Styles' on the condition of changing the climax of the novel.
Her second novel ‘The Secret Adversary,’ published in 1922 by ‘The Bodley Head,’ introduced the popular characters ‘Tommy’ and ‘Tuppence.’
Her third novel ‘Murder on the Links’ was published in 1923. This novel featured characters like ‘Hercule Poirot’ and ‘Arthur Hastings.’
Continue Reading Below
During the ‘Second World War,’ the experience of working in the pharmacy at ‘University College Hospital’ in London helped her to gain knowledge about poisons. She utilized this knowledge in her post-war crime novels.
She was seen publicly for the last time during the opening night of her play ‘Murder on the Orient Express’ in 1974. The next year, she assigned the rights of this play to her grandson due to her poor health condition. 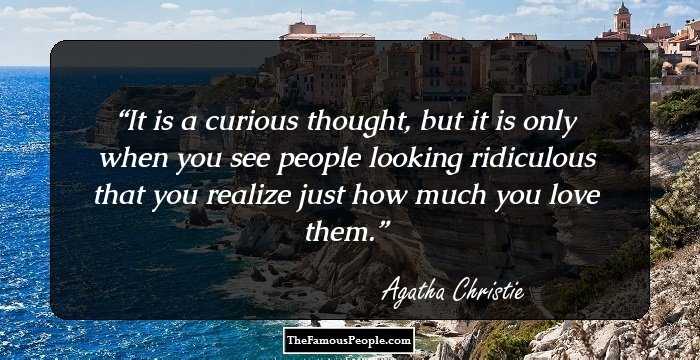 Quotes: You, Love
Major Works
Her novel ‘Murder in Mesopotamia,’ set against the backdrop of Middle East, was published in 1936. This book is remarkable for its vivid description of an archaeological dig site. The characters of this book are based on archaeologists whom she met in real life.
Published in 1938, the novel ‘Appointment with Death’ features her well-known detective character ‘Hercule Poirot.’ The novel, which is set in Jerusalem, offers some descriptive details of sites which she herself visited in order to write the book.
Awards & Achievements
Since she was a successful author of a number of detective stories, she was named the ‘Queen of Crime.’
To honor her literary creation, she was appointed Commander of the Order of the British Empire in the 1956 New Year Honours. 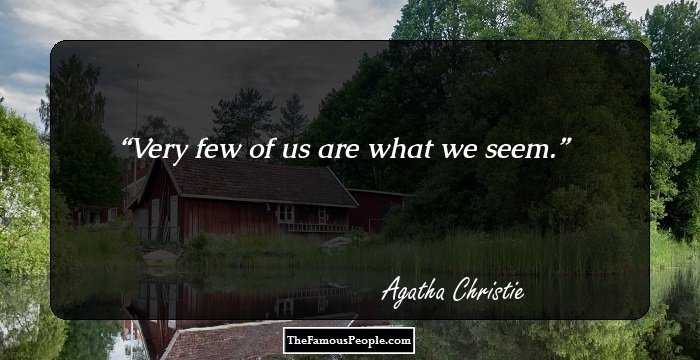 Personal Life & Legacy
Agatha Christie fell in love with Archibald Christie whom she married on the Christmas Eve in 1914. Archibald, who was the son of a judge in the Indian Civil Service, was born in India. Their daughter Roseline was born in 1919.
In 1926, her husband disclosed his relationship with another woman. On December 3, 1926, after a quarrel between Agatha and her husband, she disappeared from her house.
On December 14, 1926, she was seen at ‘Swan Hydropathic Hotel’ in Harrogate, Yorkshire. It is believed that she experienced a nervous breakdown probably due to the death of her mother earlier that year and her husband’s infidelity.
After divorcing Archibald in 1928, she married archaeologist Max Mallowan. Her travel experience with Max in the Middle East helped her write several of her detective novels.
Christie passed away on 12 January 1976 at the age of 85 at her home ‘Winterbrook House’ in Winterbrook, Wallingford, Oxfordshire.
Trivia
During her disappearance in 1926, Sir Arthur Conan Doyle took one of her gloves to a spirit medium to find her location. The then Home Secretary William Joyson-Hicks pressurized the police department to find her.

Quotes By Agatha Christie | Quote Of The Day | Top 100 Quotes

See the events in life of Agatha Christie in Chronological Order