(Known for Portrayal of the Fictional Satirical Characters)

Sacha Baron Cohen is an English actor, writer, and comedian. He became popular for his portrayal of fictional characters, such as the illiterate and dim-witted television interviewer ‘Ali G.’ Cohen was interested in performing arts from his childhood. After graduating high school, he joined his college dramatic club and acted in stage plays. Subsequently, he took up brief assignments as a fashion model. Since acting was his first love, he auditioned for the role of a television reporter for ‘Channel 4’ and was selected instantly. He went on to portray the role of ‘Ali G,’ a comic budding rapper, on the British television show ‘The 11 O’Clock Show,’ where he interviewed politicians, writers, and other eminent personalities. His portrayal of the character made him famous overnight. Soon after, he created more fictional characters – ‘Borat,’ ‘Bruno,’ and ‘Admiral General Aladeen’ – all of which impressed the audience. Besides television, he also ventured into feature films, featuring in some of the biggest box-office hits, such as ‘Borat: Cultural Learnings of America for Make Benefit Glorious Nation of Kazakhstan,’ ‘Talladega Nights: The Ballad of Ricky Bobby,’ ‘Bruno,’ ‘Hugo,’ ‘The Dictator,’ and ‘Madagascar’ series. He has been honored with a number of awards for his television shows and movies. 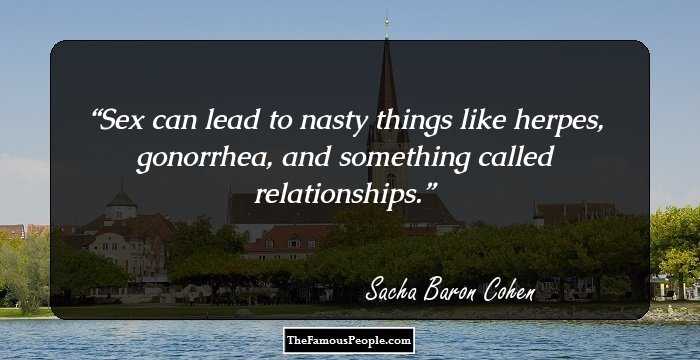 Quotes: Like
Continue Reading Below
Career
After graduating, he did modeling for various fashion magazines. Thereafter, he hosted a weekly program for a satellite TV station during the early-1990s.
In 1995, he sent a tape portraying him as an Albanian television reporter to ‘Channel 4,’ hoping to land the role of a presenter on the channel. He got selected and worked on various ‘youth TV’ projects.
He started hosting ‘F2F,’ a youth chat program, aired on ‘Granada Talk TV’ in 1996. He also appeared in a ‘McCain Microchips’ advertisement.
In 1998, he appeared on the late night comedy show ‘The 11 O’Clock Show,’ which was broadcast on ‘Channel 4.’ He appeared as the white uneducated, boorish, and aspiring rapper ‘Ali G,’ and his portrayal catapulted him to limelight.
‘Ali G,’ who wore a colorful tracksuit, tinted sunglass, and designer skullcap, became famous for posing weird questions to politicians and celebrities.
As ‘Ali G,’ he hosted the 2001 ‘MTV Europe Music Awards’ which was held in Frankfurt, Germany. In 2005, he hosted the show again in Lisbon, Portugal.
His character ‘Ali G’ became popular, so much so that he portrayed the character in the 2002 comedy flick ‘Ali G Indahouse.’
Apart from ‘Ali G,’ Cohen created another iconic character named ‘Borat Sagdiyev,’ an oversexed and intolerant Kazakh journalist.
In 2003, his characters ‘Ali G’ and ‘Borat’ appeared on American channel ‘HBO.’ The show and the characters became a huge hit in the United States.
Continue Reading Below
He voiced ‘King Julien XIII’ in the film ‘Madagascar’ in 2005. He also voiced the character in the film’s sequels – ‘Madagascar: Escape 2 Africa’ (2008) and ‘Madagascar 3: Europe’s Most Wanted’ (2012).
As ‘Borat,’ he released a travel guide bearing two titles – ‘Borat: Touristic Guidings to Minor Nation of U.S. and A.’ and ‘Borat: Touristic Guidings to Glorious Nation of Kazakhstan’ in 2007.
He then came up with another character named ‘Bruno,’ an Austrian fashion correspondent. He also appeared in the 2009 film ‘Bruno,’ released by ‘Universal Pictures.’
He made headlines in 2009 when he appeared as ‘Bruno’ at the ‘MTV Movie Awards.’ Dressed like an angel, he landed on rapper Eminem’s lap while descending from the ceiling. Later, it was revealed that the act was planned.
While working on his next film ‘The Dictator’ (2012), he created a new comedic character named ‘Admiral General Aladeen.’
His major films include ‘Talladega Nights: The Ballad of Ricky Bobby’ (2006), ‘Sweeney Todd: The Demon Barber of Fleet Street’ (2007), ‘Hugo’ (2011), ‘Les Miserables’ (2012), and ‘Anchorman 2: The Legend Continues’ (2013).
He has appeared as himself in many talk shows, such as ‘Late Show with David Letterman,’ ‘Fresh Air,’ ‘The Opie and Anthony Show,’ and ‘The Howard Stern Show.’
In 2016, he starred as a British football hooligan in the action-comedy film ‘Grimsby.’ The film was a failure at the box office. The same year, he also appeared in movies like ‘Alice Through the Looking Glass’ and short film ‘Past Forward.’
In 2018, he did a cameo in the documentary ‘The Zen Diaries of Garry Shandling.’ He portrayed various characters in the political satire TV series ‘Who is America?’ for which he also served as the writer, director, and producer.
Continue Reading Below
In 2019, he started playing ‘Eli Cohen’ in the web television miniseries ‘The Spy.’ The series is based on the life of a ‘Mossad’ spy named Eli Cohen. 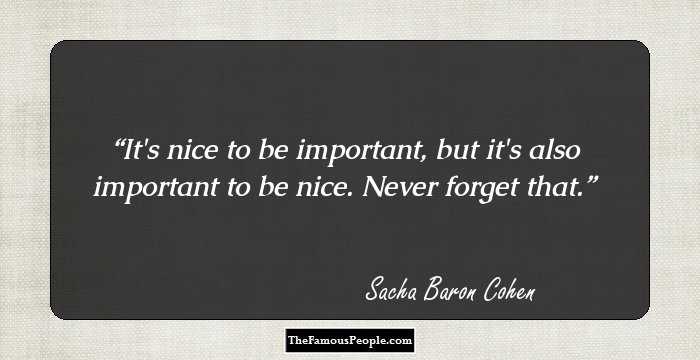 Quotes: Never
Major Works
His portrayal of ‘Ali G’ on ‘Da Ali G Show’ earned him recognition across Britain, and won him several awards. Thanks to the popularity garnered by his character, he got an opportunity to appear as a limousine driver in Madonna’s 2000 video ‘Music.’
He starred in the 2006 blockbuster mocumentary film ‘Borat: Cultural Learnings of America for Make Benefit Glorious Nation of Kazakhstan.’ In the film, he played the lead role of ‘Borat,’ for which he won several awards and nominations.
Awards & Achievements
In 1999, he was awarded the ‘Comedian of the Year’ by ‘GQ’ and received the ‘Best Newcomer’ award at the ‘British Comedy Awards’ for ‘The 11 O’Clock Show.’
He won ‘TV Quick Award’ under the ‘TV Personality of the Year’ category for ‘Da Ali G Show’ in 2000.
In 2001, he received two ‘British Academy Television Awards’ (BAFTA) for ‘Da Ali G Show’ – ‘Best Comedy (Program or Series)’ and ‘Best Comedy Performance.’
He received the ‘Ronnie Barker Award’ and ‘Deutscher Comedypreis’ (German comedy award) for ‘Best International Comedy’ in 2006.
He received the ‘Los Angeles Film Critics Association Award,’ ‘San Francisco Film Critics Circle Award,’ and ‘Toronto Film Critics Association Award’ under the ‘Best Actor’ category in 2006.
Continue Reading Below
In 2007, he was honored with the ‘Golden Globe’ award under the ‘Best Actor – Musical/Comedy’ category.
He won the ‘Best Comedic Performance’ award at the ‘MTV Movie Awards.’ He also won ‘Peter Sellers Award’ for ‘Best Comedy’ at the ‘Evening Standard British Film Awards’ in 2007.
In 2007, ‘TIME’ magazine mentioned him in the list of ‘100 most influential people.’
He received the ‘Outstanding Achievement Award’ from Sir Ben Kingsley at the 2012 ‘British Comedy Awards.’
In 2013, he won the ‘Charlie Chaplin Britannia Award’ for ‘Excellence in Comedy’ at the ‘BAFTA.’ 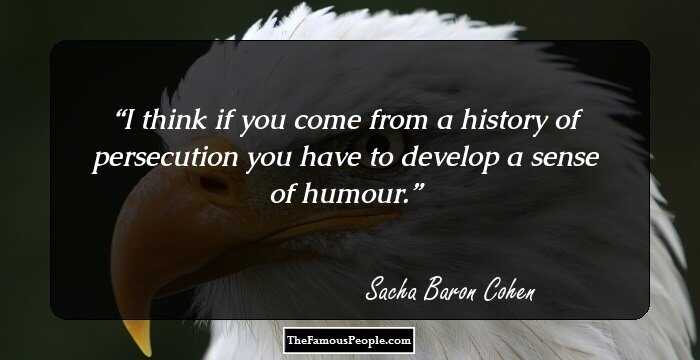 Quotes: History
Personal Life & Legacy
He met English-Australian actor Isla Fisher in 2002, and got engaged to her in 2004. The couple welcomed their first baby, a daughter named Olive in 2007, after which Fisher converted to Judaism.
The couple got married in a traditional Jewish ceremony in 2010 in Paris, France. In 2010, they were blessed with their second daughter Elula Lottie Miriam. In 2015, the couple was blessed with their son Montgomery Moses Brian.