Advanced Search
Malique Thompson-Dwyer is an English film and television actor. He has gained fame for portraying Prince McQueen in the Channel 4 soap opera ‘Hollyoaks’. A native of Greater Manchester, he has always aspired to become an actor and enrolled in Oldham College to pursue a degree in acting. He was also featured in several school plays. Thompson-Dwyer made his screen debut in an episode of the award-winning British children’s television series ‘The Dumping Ground’. That year, he was also cast to play Prince McQueen in ‘Hollyoaks’, which has been airing on Channel 4 since 1995. He made his cinematic debut in the 2017 fantasy drama ‘King Arthur: Legend of the Sword’. Thompson-Dwyer has also been featured on ITV’s reality show ‘I’m a Celebrity...Get Me Out of Here!’ Akai Osei
DID WE MISS SOMEONE?
CLICK HERE AND TELL US
WE'LL MAKE SURE
THEY'RE HERE A.S.A.P
Quick Facts

British People
British Actors
Aquarius Actors
Actors Who Are In Their 20s
British Film & Theater Personalities
Career
Malique Thompson-Dwyer’s first television role was in the CBBC’s children television drama series ‘The Dumping Ground’. He appeared in the episode called ‘Submarine’ in 2016, portraying a character named Tommo. In 2017, he debuted on the big screen in Guy Ritchie’s ‘King Arthur: Legend of the Sword’, playing the 19-year-old version of Kingsley Ben-Adir’s character, Wet Stick.
He bagged a role in the series, ‘Hollyoaks,’ which has been airing on Channel 4 since 1995. Created by Phil Redmond, it uses the fictional town of Chester as the background. The soap opera’s target audience is primarily adolescents and young adults. Over the course of the last two decades, it has won 35 British Soap Awards, 18 Inside Soap Awards, one National Television Award and one TRIC Award. Thompson-Dwyer joined the cast in 2016 to play the role of Prince McQueen. The majority of his scenes are with Chelsee Healey (who plays McQueen’s mother Goldie McQueen) or Theo Graham (McQueen’s twin brother Hunter) or Lauren McQueen (wife Lily).
In November 2018, he began appearing in the reality TV show ‘I’m a Celebrity...Get Me Out of Here!’ as a contestant. He has also been featured in the companion show, ‘I'm a Celebrity... Extra Camp.’
Recommended Lists:

Aquarius Men
Continue Reading Below
Controversies & Scandals
In late November 2018, Thompson-Dwyer’s fans took to social media and began accusing ITV of purposefully not allocating him enough screen time on ‘I’m a Celebrity...Get Me Out of Here!’ They demanded that ITV should show more of his personality and his alleged relationship with fellow contestant Nick Knowles. Some fans even lamented that they had almost forgotten that he was even on the show.
His fans were further disappointed when they found out in early December 2018 that he was the one who would be leaving the show that week. Some viewers spotted that he was the only contestant wearing his backpack when the announcement of his elimination was made. This led to speculations that Thompson-Dwyer already knew that he was going to be eliminated and that the show was fixed. ITV immediately addressed the issue, denying all allegations.
Family & Personal Life
Malique Thompson-Dwyer was born on February 2, 1998, in Hollinwood, Greater Manchester, England. His mother’s name is Debbie Dwyer. He has been performing since his school days and appeared in his school’s productions of ‘Long John Silver’ and ‘Treasure Island’.
Thompson-Dwyer seems to be an incredibly private person for a celebrity. He is not that active on Instagram and primarily uses Twitter to engage his fans. He has an infant daughter. He often posts photos with her on his Twitter handle. 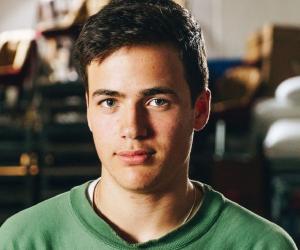