Advanced Search
Robert Andrews Millikan was an eminent American experimental physicist who won the Nobel Prize for Physics in 1923 for his work on photoelectric effect. Born in Illinois, he spent his childhood in a rural setting and attended the Maquoketa High School, Iowa. Thereafter, he did his bachelor’s in the Classics from Oberlin College. It was after he enrolled in college, that he grew interested in experimentation and problem solving. In the forthcoming years, he graduated with a master’s degree and doctorate in Physics and went on to pursue a career in science. Throughout his career, Robert Millikan was deeply involved in research, writing and academics. His most significant works in the field of physics include measurement of the elementary electronic charge, determination of the accurate value of Planck’s constant, research on the cosmic rays and understanding the photoelectric effect. As a teacher, he was involved with the University of Chicago and the California Institute of Technology. He authored and co-authored approximately a dozen books and several of his works were later converted to text books and guidebooks. Franklin Chang ...
22nd March In History
DID WE MISS SOMEONE?
CLICK HERE AND TELL US
WE'LL MAKE SURE
THEY'RE HERE A.S.A.P
Quick Facts

American Celebrities
Oberlin College
Columbia University
Aries Scientists
Male Scientists
Childhood & Early Life
Robert Andrews Millikan was born on 22 March 1868 at Morrison, Illinois. He was the second child of congregational preacher, Reverend Silas Franklin Millikan, and his wife, Mary Jane Andrews. He had five siblings.
He completed his school education from Maquoketa High School at Iowa. After graduating from high school, he worked at a saw mill and as a stenographer at court for a brief period.
In 1887, he enrolled at Oberlin College to take a degree in Classics. His teachers realised his interest in Physics at this point and was offered an opportunity to teach physics to junior classes, which he readily took up post his graduation in 1891.
In 1893 he completed his master’s degree in Physics from Oberlin College, and in 1895 he received his doctorate in Physics from the Columbia University, for his thesis on the polarization of light emitted by incandescent surfaces - using for this purpose molten gold and silver at the U.S. Mint.
After completing his doctorate, on the advice of his teachers, he did a year of postgraduate study in Europe. In Paris he attended the lectures of French physicist and engineer Henri Poincaré, while in Germany, he studied with Max Planck, Walter Nernst, and Felix Klein. 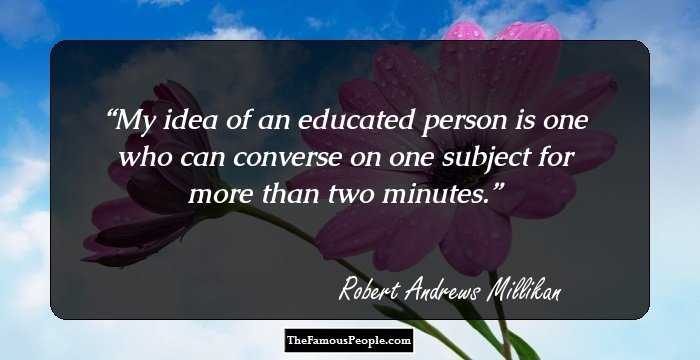 Continue Reading Below
Career
In 1896, Robert Andrews Millikan began his career by working as an assistant in Physics at the University of Chicago. He worked under physicist A. A. Michelson at the Ryerson Laboratory.
Alongside work, he also authored or co-authored several books on the subject. These include: ‘A College Course in Physics’ with S.W. Stratton (1898), ‘Mechanics, Molecular Physics, and Heat’ (1902), ‘First Course in Physics’ (1906) with H.G. Gale etc.
In 1907 he was promoted to Associate professor and he became professor in 1910. He remained in the position till 1921.
In Physics, his fields of interest were electricity, molecular physics and optics. Among his initial major successes was the accurate determination of the charge carried by an electron in 1910, which was determined using the ‘falling drop method’. He further proved that the value was constant for all electrons, thereby showcasing the atomic structure of electricity.
Between the years 1912 and 1915, his next endeavour was the research on photoelectric effect. As part of his analysis he verified Albert Einstein’s photoelectric equation, and subsequently determined the value of the Planck's constant ‘h’ with the use of photoelectric emission graphs of various metals.
In 1913, he was appointed as a consultant to the research wing of Western Electric. The following year he became a member at the American Academy of Arts and Sciences and the American Philosophical Society.
In 1915, he was elected into the National Academy of Science and the next year he was appointed as President of the American Physical Society, a post that he held for two years.
During the World War I, he held the position of Vice Chairman of the National Research Council. At this point, he assisted in the development of meteorological devices and anti- submarine weapons.
In 1917, he began visiting Throop College of Technology in Pasadena, upon the persuasion of astronomer George Ellery Hale. The institution later became the California Institute of Technology, and he became the chairman of the executive council of the Institute. He held this post from 1921 to 1945.
Continue Reading Below
Between 1920 and 1923, he was involved with studies regarding the hot-spark spectroscopy of the elements. The breakthrough regarding his law of motion of a falling particle, combined with other studies led to the integral research on ‘cosmic radiation’.
Throughout his life, Robert Andrews Millikan was actively involved in authoring books and sharing views and content on journals. His views on religion and philosophy was mirrored in several of his scientific works like ‘Evolution in Science and Religion’ (1927), ‘Electrons (+ and –)’, ‘Protons, Photons, Neutrons, Mesotrons, and Cosmic Rays’ (1947) and his autobiography in 1950.
Major Works
Robert Andrews Millikan was a renowned physicist whose most important contributions to science include determination of charge of the electron, understanding the ‘Photoelectric effect’ and his studies involving ‘cosmic rays’.
Awards & Achievements
Robert Andrews Millikan was awarded the ‘Comstock Prize in Physics’ by the U.S. National Academy of Sciences in 1913.
In 1922, he received the ‘IEEE Edison Medal’ presented by the Institute of Electrical and Electronics Engineers.
In 1923, he was awarded with the Nobel Prize in Physics "for his work on the elementary charge of electricity and on the photoelectric effect". The same year he also received the ‘Hughes Medal’ by the Royal Society of London.
In 1937, Robert Millikan was awarded the ‘Franklin Medal’ by the Franklin Institute.
Personal Life & Legacy
In 1902, Robert Millikan married Greta Ervin Blanchard and the couple had three sons; Clark Blanchard ( born in 1903) who grew up to become a professor of aeronautics, Glenn Allan (born in 1906) who later became a physiologist, and Max Franklin (1913) who went on to become a CIA official.
He died of a heart attack at his residence in California on 19 December 1953, at the age of 85.