(Actor, Musician and Eldest Brother of the Phoenix Siblings Who Accidentally Died by Combined Drug Intoxication)

Advanced Search
River Phoenix was an American actor, musician, and activist. Born in Oregon, River began his career at the age of ten, appearing in commercials. As a teenager, he played a main role in the science fiction film 'Explorers.' Directed by Joe Dante, the film was much loved by the audience and received a cult status. However it was a commercial failure. A few years later, he played a significant role in the drama film 'Running on Empty,' which was directed by Sidney Lumet. Though the film failed to be a commercial success, his performance won him an ‘Oscar’ nomination for ‘Best Supporting Actor.’ He also had a huge passion for music. A talented guitar player, he, along with his sister Rain, formed a band named ‘Aleka's Attic.’ They worked on a self-titled album which was never released due to River's untimely death. As an activist, River was involved with animal rights as well as environmental and political issues. He was an active spokesperson for the organization, ‘People for the Ethical Treatment of Animals.’ The young man had a lot to offer to the world but his promising career was cut short by his untimely death at the age of 23. At the time of his death, River was working on the film 'Dark Blood.' The film was eventually released after a period of nearly 20 years. American Celebrities
Actors
Musicians
American Men
Oregon Actors
Childhood & Early Life
River Jude Phoenix was born on 23 August 1970, in Madras, Oregon, USA, to Arlyn Dunetz and John Lee Bottom. He was named after the ‘river of life’ from the spiritual novel ‘Siddhartha’ by Hermann Hesse. The novel was based on the famed Indian ascetic Gautama Buddha, who founded Buddhism.
River was raised in Micanopy, a small town in the state of Florida. He was the eldest of five siblings. The family struggled financially, and sometimes River, along with his sister, used to sing for money on the streets. Because of their poverty, he never received formal schooling.
The family joined a controversial Christian movement named ‘Children of God,’ which stationed them as missionaries in Caracas, Venezuela. However, a few years later, the family developed a strong dislike for the organization due to its unethical activities. Thus, they went back to the US, where Arlyn began working for ‘NBC,’ while John worked as an architect. 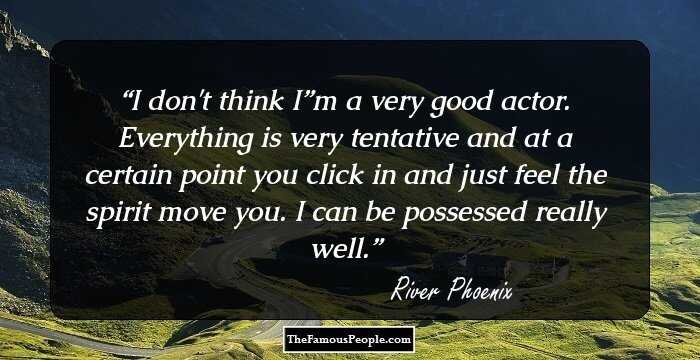 Continue Reading Below
Career
River Phoenix started appearing in commercials for corporations, such as ‘Mitsubishi,’ ‘Ocean Spray,’ and ‘Saks Fifth Avenue.’ His first significant work on TV was his role in the TV show ‘Seven Brides for Seven Brothers,’ which aired on ‘CBS’ from September 1982. Though it ran only for a single season, it received a nomination for the ‘Emmy Award.’
After playing roles in several shows, as well as in TV movies, including ‘Celebrity’ and ‘Surviving: A Family in Crisis,’ he made his film debut in 1985 in the American sci-fi movie ‘Explorers.’ The film was a commercial failure. However, it was loved by the critics.
The following year, River played the lead role in the drama film ‘Stand by Me.’ Directed by Rob Reiner, the film did well commercially. It was also nominated for several significant awards, including an ‘Oscar.’
He starred in several other films, such as ‘The Mosquito Coast’ (1986), ‘A Night in the Life of Jimmy Reardon’ (1988), and ‘Running on Empty’ (1988). His performance in ‘Running on Empty’ earned him a nomination for an ‘Oscar’ in 1989.
In 1989, he appeared in the hit movie ‘Indiana Jones and the Last Crusade.’ The film, which was directed by renowned film director Steven Spielberg, was a huge commercial success and also won an ‘Oscar.’
In 1991, River Phoenix played the lead role in the film ‘Dogfight,’ which was directed by Nancy Savoca. He also played the lead role in the adventure film ‘My Own Private Idaho’ which won him multiple awards. The following year, he played a supporting role in the film ‘Sneakers’ which was directed by Phil Alden Robinson. The film was a commercial hit.
He then appeared in films, such as ‘The Thing Called Love’ (1993) and ‘Silent Tongue’ (1994). At the time of his death, he was working on the film ‘Dark Blood’ which was directed by George Sluizer. The film was eventually released in the year 2012, nearly 20 years after the untimely death of Phoenix.
Having great passion for music, Phoenix put together a band named ‘Aleka’s Attic’ in 1987, with his sister Rain being one of the band members. They released several singles like ‘Heart to Get,’ ‘Across the Way,’ ‘Curi Curi,’ and ‘Too Many Colors.’ The band disbanded in 1992. 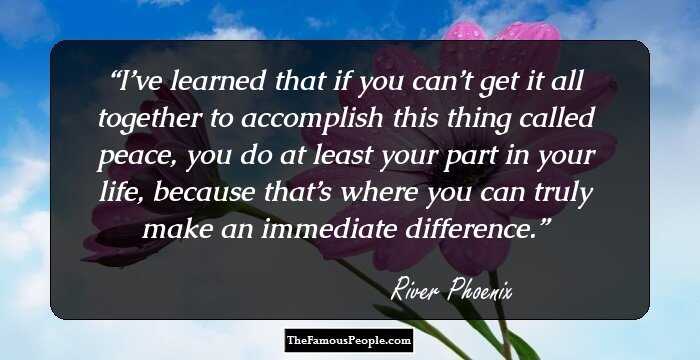 Quotes: Together
Continue Reading Below
Major Works
‘Running on Empty,’ a 1988 drama film, which earned River Phoenix a nomination for the ‘Oscar,’ is undoubtedly one of his major works. Directed by Sidney Lumet, the film also starred Christine Lahti, Judd Hirsch, Martha Plimpton, and Steven Hill. Though the film was appreciated by the critics, it was a commercial failure. The story revolved around a fugitive couple on the run. It also narrated the story of their children who struggle to escape the fugitive lifestyle.
Among his other significant works was his role in Steven Spielberg’s action-adventure film ‘Indiana Jones and the Last Crusade.’ The film starred Phoenix in a supporting role, along with actors like Harrison Ford, Denholm Elliot, Alison Doody, and Julian Glover. The film was the third installment in the ‘Indiana Jones’ franchise. The story takes place in the late-1930s and revolves around the character ‘Indiana Jones’ who goes in search of his father after he gets abducted by the Nazis. The film was a commercial success and won an ‘Oscar.’
‘My Own Private Idaho,’ which released in 1991, was one of River’s successful films. Directed by Gus Van Sant, the film starred him in the lead role. In the film, he was seen alongside actors like Keanu Reeves, James Russo, and Rodney Harvey. The film, which was about two friends on a journey of personal discovery, was critically acclaimed and received multiple awards. It was also a commercial success.
Awards & Achievements
Due to his unique talent, River Phoenix was ranked on several lists on numerous occasions. He was ranked No. 64 on the ‘Greatest Movie Stars of All Time’ poll, which was conducted by ‘Channel 4’ television in the UK. He stood at No. 86 in ‘Empire’ magazine’s 1997 list of ‘The Top 100 Movie Stars of All Time.’
River Phoenix was nominated for an ‘Oscar’ for his brilliant performance in the movie, ‘Running on Empty.’
He won several awards in his career. Some of them were ‘Young Artist Award’ for ‘Exceptional Performance by a Young Actor’ for his role in the film ‘Explorers’ and an ‘Independent Spirit Award’ for ‘Best Male Lead’ for his role in ‘My Own Private Idaho.’ 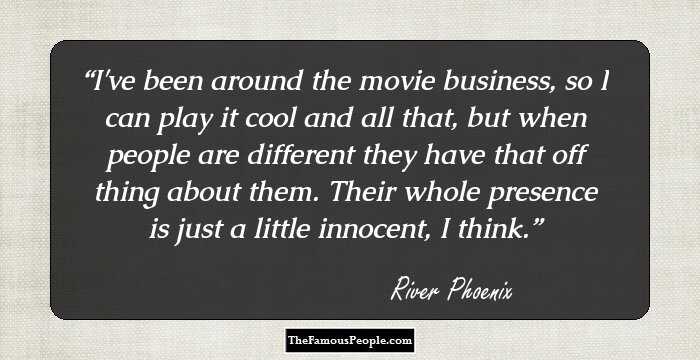 Personal Life
Phoenix was romantically involved with several women. He dated Samantha Mantis, Suzanne Solgot, and Martha Plimtpon at different points in time.
A lifelong vegan, River is remembered for his contribution to animal rights and environmental issues. He was an active spokesperson for ‘PETA.’ In 1992, he won the organization’s humanitarian award for his fund-raising efforts.
Not only did he provide financial aid to several environmental organizations, such as ‘Earth Save’ and ‘Earth Trust,’ but also bought 800 acres of endangered rainforest in Costa Rica.
Death & Legacy
River Phoenix suffered a drug overdose on October 31, 1993, and collapsed. It was due to a cocktail of drugs that he had taken the previous evening. His siblings called the paramedics who immediately arrived on the scene and transported River to ‘Cedar-Sinai Medical Centre,’ where he was declared dead.
His sad and untimely death was mourned by his friends and family, as well as his fans. After the memorial service, his ashes were scattered at the family’s Florida ranch.
Despite his untimely death at the young age of 23, he is known as one of the most successful actors of the twentieth century. He also proved to be an inspiration for several stars, such as Leonardo DiCaprio and Dylan O’Brien.
Trivia
The club ‘The Viper Room,’ outside of which Phoenix collapsed due to drug overdose, was partially owned by actor Johnny Depp. He used to close the club every year on October 31 until he sold his share in 2004.

Quotes By River Phoenix | Quote Of The Day | Top 100 Quotes

See the events in life of River Phoenix in Chronological Order