Rigoberta Menchu is a Guatemalan activist who has worked for the rights of the Mayan people in her country her entire life. She has experienced extreme adversity since she was young, including losing many members of her family to the cruelty of the Guatemalan government. She got involved in social activism very early in her life and followed her parents' footsteps in opposing the Guatemalan government during the country's civil war. After organizing protests and movements against the Guatemalan government in the early 1980s, she was forced into exile in Mexico for fear of losing her life. She continued working for the freedom of the Mayan people and was awarded the Nobel Peace Prize for her work. She has unceasingly sought retribution for the oppressed Mayan people and gained ground towards that goal including helping drive the Guatemalan Civil War to its end, development of peaceful political parties in Guatemala and prosecution of the Guatemalan officials who committed genocide against her people. Her life has been chronicled in two books and a documentary and she stands as a symbol for the fight against oppression against ethnic and poor classes Guatemalan People
Human Rights Activists
Guatemalan Women
Women Activists
Women Human Rights Activists
Childhood & Early Life
Rigoberta Menchu Tum was born January 9, 1959 to Vicente Menchu and Juana Tum in Chimel, Guatemala and is one of nine children. Her family was a part of the Quiche sect of Mayans.
Her community was poor, so she grew up working on farms and plantations six months out of the year to help support her family. Her childhood memories of the conditions under which she and her family had to work helped influence her later work; she lost a younger brother to starvation as they struggled to make ends meet.
As a teenager, she was keenly interested in social activism and took part in women's rights groups.
Her early years were shaped by a tumultuous time in Guatemalan history, the Guatemalan Civil War, during which the government was overthrown, and unrest and violence took over.
When their community was threatened, her father, a community leader and activist, helped lead the resistance in their local community. His involvement resulted in his imprisonment and torture. Despite suffering several atrocities he remained undeterred from his goal and joined the ‘Committee of the Peasant Union’ (CUC) to continue fighting for rights for Mayans and the lower class after being released. 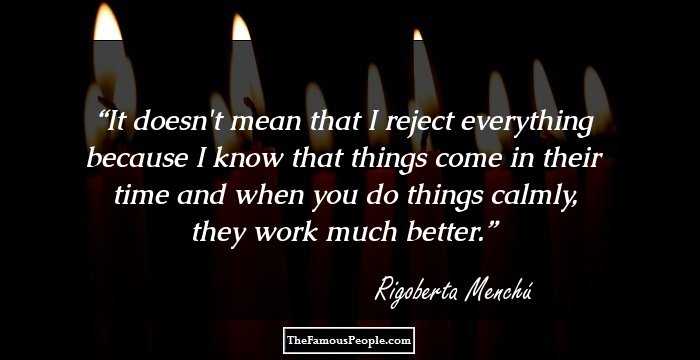 Quotes: You, Time, I
Continue Reading Below
You May Like

The Sexiest Men Of 2020, Ranked
Career
Following in the footsteps of his father Rigoberta became a part of the CUC, in 1979, to continue fighting for the rights of the Mayan people who were being persecuted by the Guatemalan government.
She was a part of a large farm worker strike in 1980 which was organized by the CUC.
In mid-1981, Menchu demonstrated in the Guatemalan capital city against the government's unfair treatment. She was then in danger for her life and, that same year, managed to escape the country to Mexico to avoid capture and punishment. There she continued her work for the Mayan poor by exposing the tragedies happening in Guatemala.
She helped found ‘The United Representation of the Guatemalan Opposition’ in 1982 which opposed the militaristic rule in Guatemala.
In 1983, she became a member of the 31st of January Popular Front and started educating those being persecuted to fight against the brutal rule of the government. Three years later she progressed to the National Coordinating Committee of the CUC.
Although she has been in exile since the demonstration in Guatemalan capital, she has come back to the country to plead the Mayan peasant class' case multiple times.
In 1996, she became a UNESCO Goodwill Ambassador promoting peace and the rights of her people. Two years later, she published her autobiography, 'Crossing Borders’.
After the civil war ended in Guatemala, she fought to have the defeated Guatemalan officials tried in Spain. Eventually, her efforts paid off and seven were tried in 2006.
A year later, she attempted to run for the presidency of Guatemala but was defeated. She then ran again unsuccessfully in 2011.
Continue Reading Below
Major Works
In 1983, she narrated the documentary 'When the Mountains Tremble' which became an important historical document cataloging the Guatemalan government's crimes against its people.
Awards & Achievements
In 1992, she was awarded the ‘Nobel Peace Prize’ for her work towards peace in Guatemala as well as exposing the affronts against the Mayan people there.
She received the ‘Prince of Asturias Awards’, in 1998, for her achievements in the social welfare of indigenous people.
Personal Life & Legacy
She lost several members of her family during the Guatemalan Civil War including her father who died during a protest and her mother who was violently tortured and killed.
In 1983, her life story was transcribed and translated into English in the book 'I, Rigoberta Menchu' and was based on interviews by Elisabeth Burgos Debray. It became an internationally recognized record of the Guatemalan struggles. There has been some controversy surrounding the credibility of her account of the crimes she witnessed but many have supported her testimonies.
Rigoberta Menchú had pledged not to marry and dedeicate all her life to her work. But she reneged on her pledge and got married to Angel Canil, who is 10 years younger to her, in 1995. The couple have adopted a son named Mash Nawalj'a.
Her work significantly influenced the eventual end of the Guatemalan Civil War in 1996.
She help found the ‘Nobel Women's Initiative’ in 2006 which acts towards establishing women's rights around the world.
Trivia
This famous activist was president of a pharmaceutical company, ‘Health for All’, which worked to produce low-cost, generic medicines.
You May Like

See the events in life of Rigoberta Menchú in Chronological Order