Richard Lewis Springthorpe, better known as Rick Springfield, is a popular Australian singer. He won the 'Grammy Award' for 'Best Male Rock Vocal Performance' for 'Jessie's Girl', a song from his fifth album 'Working Class Dog'. He is also a successful actor, as well as a songwriter and an author. Born in Guildford, Sydney, Australia, he developed an interest in music during his teenage years after he watched the Beatles perform in Melbourne. At the age of twenty, he joined the band 'Zoot' as a backing vocalist. A year after the band disbanded, he released his debut studio album 'Beginnings'. His most successful works include 'Working Class Dog', his fifth album which peaked at seventh position on the US Billboard 200. His album 'Living in Oz' also performed quite well and stood at number nine on the Billboard Hot 100. As an actor, he has appeared in several films and TV shows. His first significant role on the big screen was in the movie 'Hard to Hold'. Springfield has also appeared in several TV shows such as 'Californication', 'True Detective' and 'Supernatural'. He has written an autobiography 'Late, Late at Night: a Memoir', which became a bestseller. American People
Australian People
American Men
Australian Men
Tall Celebrities
Tall Male Celebrities
Childhood & Early Life
Rick Springfield was born on 23rd August 1949 in Guildford, Sydney, Australia. His parents were Eileen Louise and Norman James Springthorpe.
He developed an interest in music after he watched the Beatles perform in Melbourne. He worked for various bands before finally joining the rock band Zoot as a backing vocalist.
Continue Reading Below
You May Like

The Sexiest Men Of 2020, Ranked
Musical Career
The band 'Zoot' came to popularity in 1971 after they released a hard rock cover version of 'Eleanor Rigby,' a hit song by the Beatles. The band, however, broke up after some time.
The same year, Springfield, released his debut solo single, ‘Speak to the Sky,’ after signing with Sparmac Records. The next year, he released his debut album 'Beginnings'.
After the release of his other albums including 'Comic Book Heroes’ (1973) and 'Wait for Night’ (1976), he became quite well-known. His popularity rose to new heights after the release of his 1981 album 'Working Class Dog'.
The album peaked at seventh position on the US Billboard 200. The song 'Jessie Girl' from the album was a huge hit. It won Springfield the ‘Grammy Award’ for Best Rock Vocal Male Performance.
He then released the albums 'Success Hasn't Spoiled Me Yet' (1982) and 'Living in Oz' (1983). Both the albums did quite well.
Other albums released by Springfield over the ensuing years of his career include 'Beautiful Feelings' (1984), 'Rock of Life' (1988), 'Karma’ (1999), 'The Day After Yesterday' (2005), 'Venus in Overdrive' (2008) and 'Songs for the End of the World' (2012). His latest studio album 'Rocket Science’ was released in February 2016.
Acting Career
Rick Springfield made his acting debut in an episode of the American science fiction series 'The Six Million Dollar Man'. Other shows he appeared in over the next few years include 'The Hardy Boys/Nancy Drew Mysteries', 'Saga of a Star World' and 'The Rockford Files'.
He played his first important role in the medical drama series 'General Hospital'. The show not only gained extreme popularity but also made a Guinness World Record as the longest-running American soap opera.
He played the lead role in the 1984 musical drama film 'Hard to Hold'. Directed by Larry Peerce, the film starred him as a pop idol James Roberts, trying to win the affection of a child psychologist named Diana Lawson.
Continue Reading Below
In 1994, he played the lead role in the T.V. series 'Robin's Hoods'. The following year, he appeared in the Broadway musical theatre in 'Smokey Joe's Cafe'.
He played a minor role in the third season of the American comedy-drama television series 'Californication'. He played a supporting role in the 2015 American comedy-drama film 'Ricki and the Flash'. The film was a commercial success.
His latest appearances on TV include his role in the twelfth season of the American fantasy horror television series ‘Supernatural’.
Major Works
‘Jessie’s Girl’ was a song from Springfield’s fifth album ‘Working Class Dog’. Written and performed by Springfield, the song is about a young man in love with his best friend’s girlfriend. The song became a huge hit. It peaked at 1st position on the Australian Charts, and also charted at the US Billboard Hot 100. The song won Springfield the Grammy Award for Best Rock Vocal Male Performance.
Springfield played an important role in the TV medical drama series ‘General Hospital’. Created by Jean Passanante and Shelly Altman, the series was a huge success. It eventually made a Guinness World Record for being the longest running American soap opera as well as the longest running drama on TV. The show won several Emmy Awards along with other significant awards.
One of Springfield’s most recent works was his role in the American fantasy horror series ‘Supernatural’. Created by Eric Kripke, the series has been airing from 2005. Undoubtedly one of the most popular and successful shows on American TV, the show has won many awards and nominations.
Awards & Achievements
Rick Springfield has been nominated for four Grammy Awards, out of which he has won one. For his song ‘Jessie’s Girl’, he received the 1982 Grammy Award for Best Rock Vocal Male Performance.
For his contribution to music, he has also been honored with a star on the Hollywood Walk of Fame.
Personal Life
Rick Springfield used to date actress Linda Blair during the 1970s.
In 1984, he married his longtime girlfriend Barbara Porter. The couple has two sons, Liam and Joshua.

See the events in life of Rick Springfield in Chronological Order 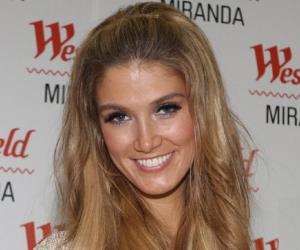