Max Reger, born as Johann Baptist Joseph Maximilian Reger, was a German composer, musician and teacher. He is counted among the most influential German composers of his time. A multi-faceted personality, he is especially well-known for elaborating on the stylistic traits of Johannes Brahms, and leading the transition of German music into the 20th century. He was also an organist and conductor and had made important contributions to music in these roles as well. Born as the son of a music teacher in Bavaria, he displayed a keen interest in music from a young age. He studied music under Hugo Riemann and went on to become a teacher of piano, organ, and theory. During this time he became friends with Busoni and the organist Straube who helped him establish himself as a musician. Soon he became a popular composer and pianist in Munich and his teaching career also flourished. He was a prolific composer and produced an enormous output of orchestral, chamber, vocal, organ and piano music over his career. His musical style was very dense with extremely fast modulations. His specialty was organ music which was very intense and deep and considered second only to Johann Sebastian Bach's compositions. He was a brilliant musician who in spite of his short life left an indelible mark on late 19th and early 20th century German music. Erwin Bach
Pianists #436
Conductors #104
Composers #972
19th March In History
DID WE MISS SOMEONE?
CLICK HERE AND TELL US
WE'LL MAKE SURE
THEY'RE HERE A.S.A.P
Quick Facts

German Celebrities
Organists
Conductors
German Men
Male Pianists
Childhood & Early Life
Max Reger was born in Brand, Bavaria, on 19 March 1873, to Joseph Reger and his wife, Philomena, née Reichenberger. His father was a village teacher who taught German, history, geography, harmony, organ and piano. He had several younger siblings of whom many died in childhood.
He was musically inclined from childhood and started receiving piano lessons from his mother when he was five years old and then also learnt from his father. His mother also taught him reading, writing and mathematics at home even before he started going to school.
In 1882, he enrolled at the royal secondary school and received lessons in piano and organ from Adalbert Lindner, a teacher and organist at Weiden, from 1884 until 1889.
He completed his secondary schooling in 1886. He decided to become a teacher in accordance with his parents’ wishes and entered into the royal Praeparandenschule to receive training for the profession. During this time he also started playing the organ at the Catholic Sunday divine service in the city parish church St Michael.
In 1887, Max Reger gave his first public performance at the inn Zur Eisenbahn with Julius Schulhoff's sonata in F minor. By the next summer, he had composed his first orchestral work, an Overture in B minor, 120 pages in volume.
He finished the Praeparandenschule with an excellent certificate in 1889. But by now, he wanted to pursue a career as a musician even though his parents pressurized him to become a teacher. However, several people, including Joseph Rheinberger, a professor at the Munich Akademie der Tonkunst, and opera singer Wilhelmine Mayer supported the young Max and his father finally relented.
He also received the encouragement of Hugo Riemann, the leading musicologist of his time. Motivated to pursue an education in music, he started studying piano and theory the conservatoire at Wiesbaden in 1890. At the same time, he also became a teacher of piano, organ, and theory. 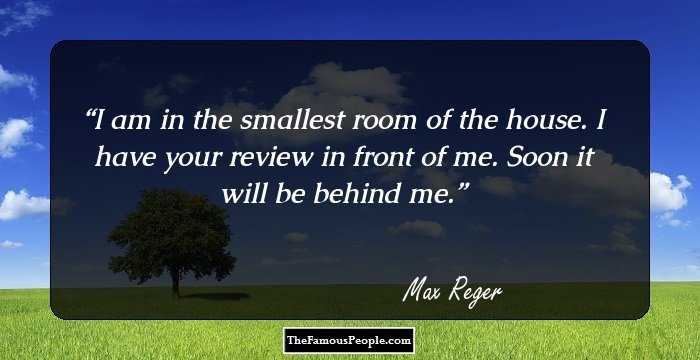 Quotes: Me, Will, I
Continue Reading Below
You May Like

The Sexiest Men Of 2020, Ranked
Career
In 1892, Hugo Riemann, the famous German composer, helped Max Reger procure a seven year contract with the London publishing company of Augener & Co. The same year, he completed his first cello sonata, his most advanced Wiesbaden chamber music work.
He settled in Munich in 1901 and from here started his phenomenal rise to fame and success. He received several concert offers and appeared in ten concerts as an organist, chamber pianist and accompanist in the first season itself.
Because of his growing stature, he was appointed Rheinberger's successor at the Akademie der Tonkunst in 1905. However, he resigned from this prestigious post after a year because of disagreements with the other staff members.
He was appointed as the university musical director and professor at the royal conservatoire at Leipzig in 1907. However, he resigned from this post too after a year though he continued to serve as professor of composition at the conservatory until his death.
In 1911, he accepted the position of the Court conductor at Meiningen, a post he held till early 1914. He continued his composition and concert activities throughout his life.
Major Works
Max Reger was best known for his organ music compositions which were quite challenging to the performers. Some of his best known organ works include Chorale Fantasias on Ein' feste Burg ist unser Gott, Op. 27, and other Lutheran chorale tunes.
He also composed music to texts by prominent poets such as, Otto Julius Bierbaum, Adelbert von Chamisso, Joseph von Eichendorff, Emanuel Geibel,Friedrich Friedrich Rückert and Ludwig Uhland.
His piano compositions include a number of short pieces, the best of which is the Variations and Fugue on a Theme of Mozart, Op. 132a, for two pianos. He also wrote several pieces of chamber music, including a number of violin sonatas and string quartets.
Personal Life & legacy
Max Reger fell in love with a divorced lady, Elsa von Bercken, and married her in 1902. Since Reger was Catholic and Elsa, Protestant, he was excommunicated by the Catholic Church.
He died of a heart attack on 11 May 1916 at age 43.
Recommended Lists:
Organists #16
Musicians #4998
Miscellaneous #3897
You May Like

See the events in life of Max Reger in Chronological Order