DID WE MISS SOMEONE?
CLICK HERE AND TELL US
WE'LL MAKE SURE
THEY'RE HERE A.S.A.P
Popularity Index
326
Film & Theater Personalities #395
Quick Facts

Who is Richard Gere?

Richard Gere is one of the most popular Hollywood actors. Besides being an actor, he is also an activist. He entered the film industry with a role in ‘Looking for Mr. Goodbar,’ and then played a starring role in ‘Days of Heaven.’ Films like ‘American Gigolo’ and ‘Pretty Woman’ cemented his place as a leading star. He has since starred in several blockbuster films. He has been honored with a number of awards, and was named ‘The Sexiest Man Alive’ by an extensively distributed online journal. Apart from being one of the best-looking Hollywood actors, he is also one of the most expensive actors, charging around five to ten million USD for each film. He adds to his fat bank balance by appearing in commercials and endorsing a number of products. He is also actively involved in a number of philanthropic organizations that work for a number of causes. He also takes up the cause of native tribes around the world. He is an ardent devotee of the 14th Dalai Lama and vigorously campaigns for Tibetan independence. College Dropouts
American Men
University Of Massachusetts Amherst
American Film & Theater Personalities
Childhood & Early Life
Richard Tiffany Gere was born on August 31, 1949, in Philadelphia, Pennsylvania, USA, to Doris Ann and Homer George Gere.
He studied at ‘North Syracuse Central High School,’ where he excelled at gymnastics and music. He graduated from there in 1967.
He then attended the ‘University of Massachusetts Amherst,’ where he studied philosophy. He did not graduate from the university as he dropped out after two years. 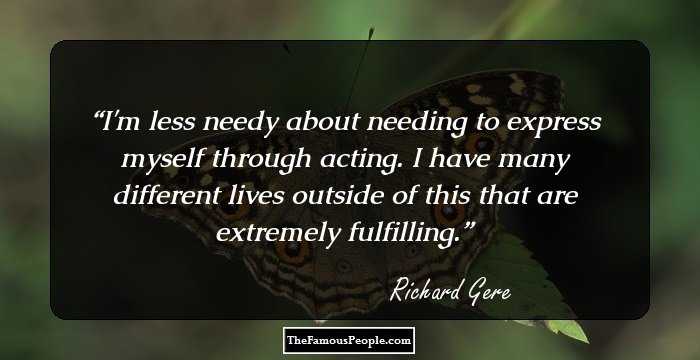 Virgo Men
Career
In 1969, he worked for ‘Seattle Repertory Theatre’ and ‘Provincetown Playhouse.’ Subsequently, he was cast in ‘Rosencrantz and Guildenstern Are Dead.’ Four years later, he received his first big break in theater when he appeared in the stage adaptation of ‘Grease.’
In 1975, he made his motion picture debut when he appeared as ‘Billy’ in the film ‘Report to the Commissioner.’ The following year, he starred in ‘Baby Blue Marine.’
He received his big breakthrough in Hollywood when he was cast to play ‘Tony’ in ‘Looking for Mr. Goodbar’ in 1977. His performance was lauded by the audience and critics. After the success of this film, Terrence Malick offered him a role in the film ‘Days of Heaven.’
By 1979, he had already established himself as a bankable actor. He became the first actor to play the role of a homosexual Holocaust victim in the Broadway production ‘Bent.’ The same year, he starred in the film ‘Yanks’ as ‘Matt Dyson.’
In 1980, he was cast to play the role of ‘Julian Kaye’ in the film ‘American Gigolo.’ This movie earned him the status of America’s favorite ‘sex-symbol.’
In 1982, he showcased his versatility with his role in the romantic-drama film ‘An Officer and a Gentleman,’ which broke many records at the box-office. He was also nominated for a ‘Golden Globe Award’ for ‘Best Actor’ for his role as ‘Zack Mayo’ in the film.
From 1983 to 1988, he starred in a number of movies, such as ‘The Honorary Consul,’ ‘Breathless,’ ‘The Cotton Club,’ ‘King David,’ ‘No Mercy,’ ‘Power,’ and ‘Miles From Home.’ Many of these films did not do well at the box office.
He then landed roles in ‘Internal Affairs’ and ‘Pretty Woman,’ both of which released in 1990. After the release of these films, he regained his status as a leading actor.
Following his roles in these flicks, he went on to star in a number of other successful films, including ‘Sommersby,’ ‘Primal Fear,’ ‘Runaway Bride,’ and ‘The Jackal,’ all of which released from 1993 to 1999.
Continue Reading Below
He was nominated for the ‘Satellite Award’ for ‘Best Actor’ for the film ‘Dr. T & the Women,’ which released in 2000. The same year, he was cast as ‘Will Keane’ opposite Winona Ryder in the film ‘Autumn in New York.’
In 2002, he played the role of ‘Billy Flynn’ in the film ‘Chicago.’ The same year, he was cast in two other successful films, namely ‘The Mothman Prophecies’ and ‘Unfaithful.’
In 2004, he once again stunned the audience with his versatility in the dance-drama film ‘Shall We Dance?’ opposite Jennifer Lopez. The movie went on to become a huge success at the box-office, grossing more than $170 million. However, his next venture ‘Bee Season’ (2005) was deemed a failure at the box office.
In 2007, he was cast in ‘The Hunting Party.’ The same year, he also played a part in the semi-biopic ‘I’m Not There,’ alongside other superstars, such as Cate Blanchett, Heath Ledger, and Christian Bale. The film was based on Bob Dylan’s life.
From 2008 to 2011, he starred in a number of movies, including ‘Nights in Rodanthe,’ ‘Amelia,’ ‘Hachi: A Dog’s Tale,’ ‘Brooklyn’s Finest,’ and ‘The Double.’
He was nominated for the ‘Golden Globe Award’ for ‘Best Actor’ for the 2012 film ‘Arbitrage,’ where he played the role of ‘Robert Miller.’ His other works include ‘Movie 43’ (2013), which is a sketch-comedy anthology, featuring 14 intertwined storylines.
He also appeared in ‘Cosmos: A Spacetime Odyssey’ (a 2014 American science documentary television series), ‘Henry & Me’ (2014), ‘Time Out of Mind’ (a 2014 American drama film), and 'The Second Best Exotic Marigold Hotel' (a 2015 British comedy-drama film).
In 2015, he appeared in the drama film ‘The Benefactor.’ The following year, he was seen in the American-Israeli political drama movie ‘Norman: The Moderate Rise and Tragic Fall of a New York Fixer.’
In 2017, he appeared in ‘The Dinner’ and ‘Three Christs’ as ‘Stan Lohman’ and ‘Dr. Alan Stone’ respectively.
Continue Reading Below
In 2019, he was cast as ‘Max Finch,’ a London-based newspaper owner, in the ‘BBC 2’ TV miniseries ‘MotherFatherSon.’ 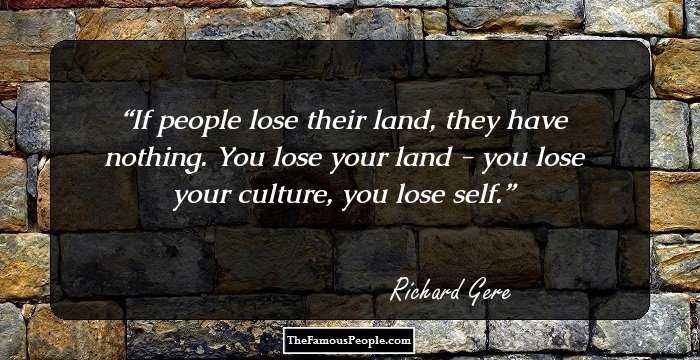 Major Works
In 1978, Gere was cast in ‘Days of Heaven,’ which was well-received at the box-office. Considered one of his greatest earlier works, the film went on to win a number of awards, and was even showcased at the ‘Cannes Film Festival.’ This was one of the first few films that established his acting skills.
‘Pretty Woman,’ which released in 1990, is a romantic-comedy, starring Richard Gere and Julia Roberts. This is regarded as one of his major works because he had appeared in a string of unsuccessful films before landing a role in ‘Pretty Woman.’ With this film, he bounced back and cemented his place as one of the best ‘leading men’ in Hollywood. He went on to earn a ‘Golden Globe’ nomination for ‘Best Actor’ for this movie which collected a whopping $463,406,268 at the box office.
In 2002, he starred in ‘Chicago,’ a musical film which also starred Catherine Zeta Jones and Renee Zellweger. The film grossed $306,776,732 around the world. He went on to receive a ‘Golden Globe Award’ for his performance in the movie.
Awards & Achievements
In 1979, he won the ‘David di Donatello Award’ for ‘Best Foreign Actor’ for ‘Days of Heaven.’
He was made the president of the jury of the 19th ‘Moscow International Film Festival’ in 1995.
He won the ‘National Board of Review Freedom of Expression Award’ for the film ‘Red Corner’ in 1997.
In 2003, he won the ‘Golden Globe Award’ for ‘Best Actor’ for the film ‘Chicago.’
Continue Reading Below
In 2008, he won the ‘Independent Spirit Robert Altman Award’ for his performance in ‘I’m Not There.’
On February 16, 2012, he was presented the ‘George Eastman Award’ for his contributions to the film industry.
He was presented the ‘Medal of Gratitude’ on May 12, 2012, by the Albanian President Bamir Topi. 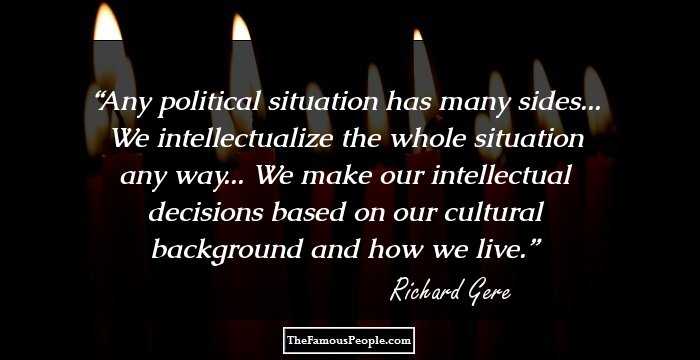 Personal Life & Legacy
He married Cindy Crawford in 1991, but divorced her four years later.
In 2002, he married model and actor Carey Lowell, and they have a son named Homer James Jigme Gere. On September 2013, Lowell and Gere got separated due to lifestyle differences.
On April 2018, he married Spanish activist Alejandra Silva, and they welcomed their son on February 2019.
From a very long time, he has been displaying interest in Buddhism, and has been an active human rights activist in Tibet. In order to get people support his cause, he established ‘The Gere Foundation’ and also founded the ‘Tibet House.’
He is an active supporter of the ‘Survival International’ organization, and also fights for the rights of indigenous tribes around the world. He also campaigns for AIDS awareness.
In 2010, he expressed his sentiments and deep remorse regarding the invasion of Iraq. He also said the pandemonium that was created was due to the poor and distasteful decisions of a very ‘poor president.’
Trivia
This popular American actor and philanthropist kissed Bollywood actor Shilpa Shetty on the cheek in full public and media view. Subsequently, both the actors were charged by a court for violation of rules related to ‘public obscenity.’

Quotes By Richard Gere | Quote Of The Day | Top 100 Quotes

See the events in life of Richard Gere in Chronological Order