Elvis Costello, born as Declan Patrick MacManus, is an English pop singer and songwriter. He is considered as one of the New wave musicians. He is also an innovative songwriter known for the rich vocabulary of his lyrics which is so uncommon among most pop songwriters. His works cover diverse musical genres and he also loves to mix and match various genres to produce music with a signature feel. It is no surprise that music is his passion — the son of a musician father, music runs in his blood. The father-son duo had even sung together for a television commercial, winning a prize in the process. He took up the stage name Elvis Costello when he began to perform professionally. The talented young musician signed a contract with the independent label Stiff Records and released his debut album, ‘My Aim is True’. The album was a moderate commercial success but it showcased his potential to the world. He formed his own backing band, The Attractions, consisting of bassist Bruce Thomas, drummer Pete Thomas, and keyboardist Steve Nieve. He reached the peak of his success during the late 1970s when all the albums he released went either Gold or Platinum. Though not as successful during the 1980s, he has surely managed to garner a devoted cult following. British People
Pop Musicians
British Men
Male Singers
Virgo Singers
Childhood & Early Life
Elvis Costello was born to Ross MacManus and Lilian Alda. His father was a musician who had played with the Joe Loss Orchestra.
He attended the Hounslow Secondary Modern School.
As a youngster he performed with his father in an award-winning television commercial for R. White’s Lemonade.
His parents separated when he was a teenager and he moved to Liverpool with his mother.
He enrolled at St. Francis Xavier’s College and returned to London after completing his education. 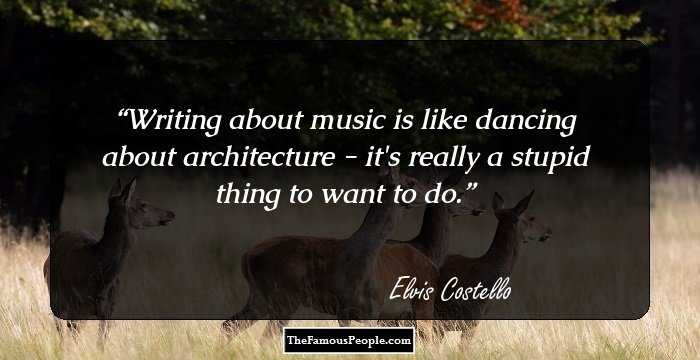 Quotes: Like, Music
Continue Reading Below
Career
He formed ‘Flip City', along with aspirating musicians Mich Kent and Malcolm Dennis, in 1974. The band could not do well and was disbanded the very next year.
Costello played solo gigs and did several small jobs to support his family. He spent his free time writing songs and recording demo tapes to send to record companies but with little success.
He sent a demo tape to independent label Stiff Records in 1976 after reading an ad inviting demo tapes. Stiff Records’ Nick Lowe loved the promising singer’s music and signed a contract with him. It was during this time that he adopted his stage name Elvis Costello.
His debut album, ‘My Aim is True’ was released in 1977. It was produced by Nick Lowe and the backing music was provided by members of the band Clover. The album was a commercial success.
In late 1977, he formed his own backing band The Attractions with Steve Nieve, Bruce Thomas and Pete Thomas. His 1978 album, ‘This Year’s Model’ was the first one with this band.
He brought out ‘Armed Forces’ in 1979. The album was praised by reviewers for its clever and snappy lyrics. It featured the singles ‘Accidents will happen’ and ‘Alison’.
The success of his previous albums motivated him to release at least an album every year. His 1980 album, ‘Get Happy!’ featured a sound different from its predecessors and had elements of R&B and soul music.
In 1981, he released the album ‘Trust’. He was going through a difficult period and his cynical attitude was reflected in the lyrics of the album. It was his first album so far to have registered the lowest sales figure.
Even though he was not as popular during the 1980s, but he still did manage to produce minor hits. He released several albums till 1989 which included ‘Almost Blue’ (1981) and ‘Goodbye Cruel World’ (1984), but they were not much successful.
Continue Reading Below
His 1989 album, ‘Spike’ did considerably better than many of his previous ones. It was also the first one he released with Warner Brothers. The album went Gold in both the U.K. and U.S.
He continued to bring out albums in the 1990s, but his popularity was waning and none of his albums reached the Gold status.
He could not revive his old popularity even in the new millennium. Some of his recent albums include: ‘North’ (2003), ‘The River in Reverse’ (2006), and ‘National Ransom’ (2010). 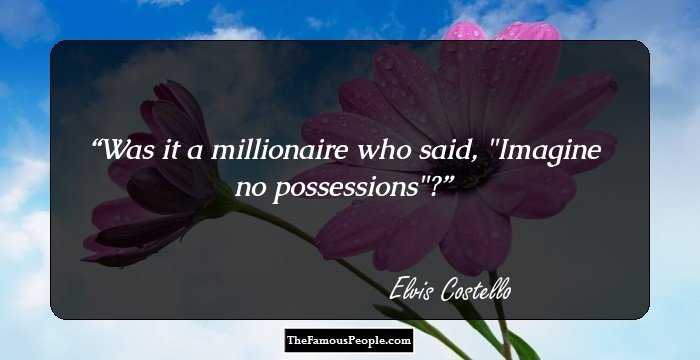 Major Works
His first album, ‘My Aim is True’ (1977) was a big hit; it was considered to be the most impressive debut album in the history of pop music. The album went Platinum in the U.S. and Gold in Canada.
His 1979 album, ‘Armed Forces’, was named on Rolling Stone magazine’s list of greatest albums. It was accredited Platinum in the U.K and Canada. The album was so popular that it was reissued twice, in 1993 and 2001 by different labels.
Awards & Achievements
He has won two Q Merit Awards (2001 and 2002) at the U.K’s annual music awards presented by the music magazine Q.
He also has several Grammy nominations to his credit. 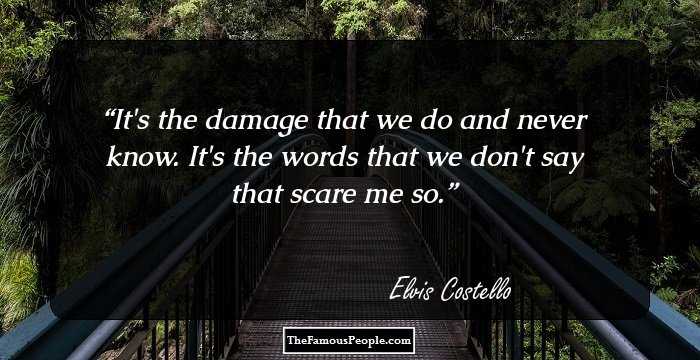 Quotes: Me, Never
Personal Life & Legacy
His first marriage was to Mary Burgoyne in 1974 with whom he has a son. The marriage ended in divorce.
He married bassist Cait O’Riordan in 1986. This marriage too ended when the couple separated in 2002.
In 2003, he married musician Diana Krall. He has twin sons with her.
He converted to vegetarianism in the 1980s.
He is involved with the Jazz Foundation of America, a non-profit organization that works to help jazz musicians who are in need of emergency funds.
Trivia
He, along with his band The Attractions, was inducted into the Rock and Roll Hall of Fame in 2003.
He has starred in several films in minor roles, often portraying himself.
He is a big football fan and supports Liverpool.

Quotes By Elvis Costello | Quote Of The Day | Top 100 Quotes

See the events in life of Elvis Costello in Chronological Order