Advanced Search
Reba Nell McEntire is a country music singer who has won numerous awards and accolades, thanks to her impressive voice and talent. Born to a mother who loved music, Reba was taught music and singing from a young age. Naturally inclined towards music, the young girl taught herself to play the guitar. Along with her siblings, she formed a vocal group called the ‘Singing McEntires’ which performed at rodeos. Her life took a turn for the better when her performance of the National Anthem at the National Rodeo got noticed by country artist Red Steagall who helped her sign a contract with a major record label. Her initial years in the music industry were fraught with failures and success eluded her for a long time. Undaunted, the feisty singer worked on her voice and improved her style. Subsequently, she came up with her album ‘My Kind of Country’ which helped establish her singing career by spawning two No.1 singles, ‘How Blue’ and ‘Somebody Should Leave.’ The success of this album prompted her to release several more albums and singles that went on to become super hits and cemented her position as the reigning queen of country music. Eventually, she tried her hand at acting with a role in the horror comedy ‘Tremors.’ She then went on to appear in several television movies. Jennette McCurdy
28th March In History
DID WE MISS SOMEONE?
CLICK HERE AND TELL US
WE'LL MAKE SURE
THEY'RE HERE A.S.A.P
Quick Facts

American People
Business Women
Country Singers
American Women
Oklahoma Actresses
Childhood & Early Life
Reba Nell McEntire was born on March 28, 1955, in McAlester, Oklahoma, USA, to Clark Vincent McEntire and Jacqueline. Her father, a steer roper, was a three-time World Champion Steer Roper. Her mother, who loved country music, worked as a school teacher.
Reba and her siblings were taught music from a young age; she also learnt to play the guitar. Along with her siblings, she formed a music group called the ‘Singing McEntires’ in which she played the guitar and penned the lyrics for the songs.
She attended ‘Southeastern Oklahoma State University’ from 1974 to 1976. Initially, she wanted to become an elementary school teacher. She continued singing in her leisure time. 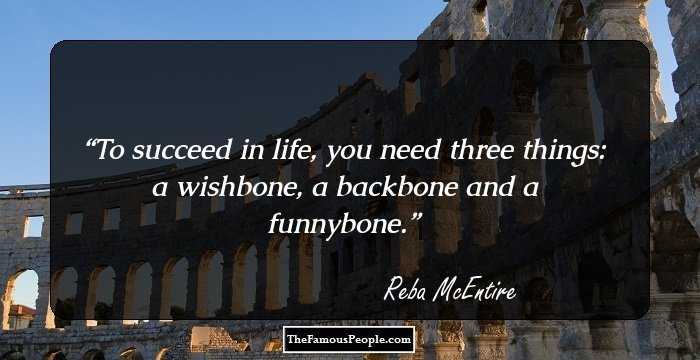 Quotes: You, Life, Need
Continue Reading Below
Career
She was once hired to sing the National Anthem at the National Rodeo in Oklahoma City where country singer Red Steagall was also present. Impressed by her skills, he helped her sign a contract with ‘Mercury Records’ in 1975.
Her self-titled debut album released in 1977. Unfortunately, the album was not a success. She released several other albums over the next few years, but none of them were successful.
It was not until 1984 that she found success. In 1984, she released her eighth studio album ‘My Kind of Country’ which featured the tracks ‘How Blue’ and ‘Somebody Should Leave.’ The songs peaked at No.1 positions on the ‘Country Singles’ chart.
In 1986, she brought out the album ‘Whoever’s in New England’ which became her first No.1 album on the ‘Billboard Country Chart.’ It was her first platinum-certified album that eventually made her a musical superstar.
During the late-1980s, she brought out three other highly popular albums that were accredited platinum: ‘The Last One to Know’ (1987), ‘Reba’ (1988), and ‘Sweet Sixteen’ (1989).
Her super hit album ‘It’s Your Call’ released in 1992. It featured the song ‘The Heart Won’t Lie’ and a re-recording of the song ‘Baby’s Gone Blues.’ The album peaked at No.1 on the country album chart.
In 1994, she brought out the album ‘Read My Mind.’ She addressed the issue of AIDS through the lyrics of the song ‘She Thinks His Name Was John.’ The album sold very well and was rated multi-platinum.
Three of her albums were released during the 2000s: ‘Room to Breathe’ (2003), ‘Reba: Duets’ (2007), and ‘Keep on Loving You’ (2009). Two of these albums were accredited platinum in the U.S.
She played the character of ‘Reba Hart,’ a single mom, in the American sitcom ‘Reba’ which ran from 2001 to 2007. The show was extremely successful and was broadcast in more than 30 countries.
Continue Reading Below
She has made minor appearances in several feature films. She has also lent her voice to some popular movie characters.
From 2010 to 2019, she released many albums like ‘All the Women I Am’ (2010), ‘Love Somebody’ (2015), ‘My Kind of Christmas’ (2016), ‘Sing It Now: Songs of Faith & Hope’ (2017), and ‘Stronger Than the Truth’ (2019). 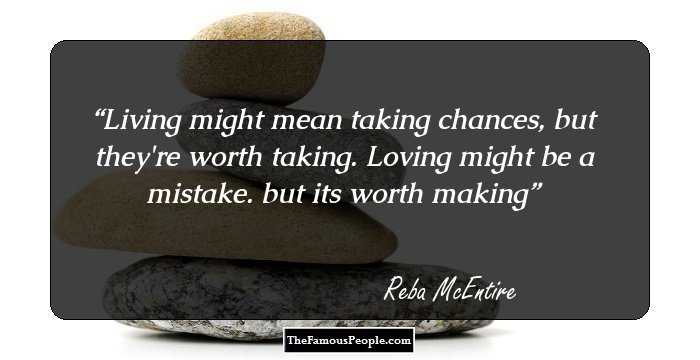 Quotes: Living
Major Works
Her portrayal of ‘Reba Hart’ in the sitcom ‘Reba’ cemented her place as a singer-cum-actress. The highly popular show was aired in 30 countries all over the world and made Reba McEntire a household name.
Her album ‘Read My Mind’ featured the first ever country song to address the issues related to AIDS. The album peaked at No.1 on the ‘Canadian Top Country Albums Chart’ and was accredited multi-platinum.
Awards & Achievements
She is the winner of two ‘Grammy Awards’ which include the ‘Best Female Country Vocal Performance’ for ‘Whoever's in New England.’
She won the ‘British Country Music Award’ twice for ‘International Female Vocalist’ (1999 and 2000). 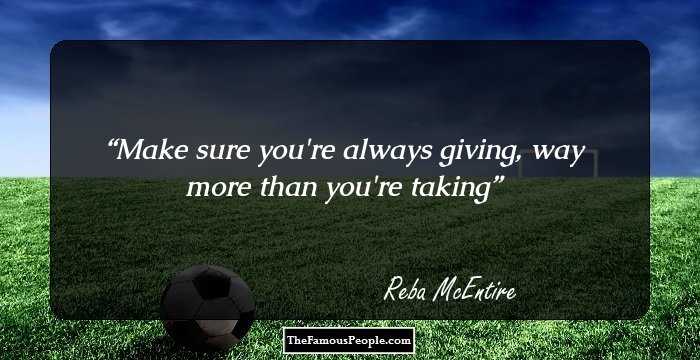 Personal Life & Legacy
She married national steer wrestling champion Charlie Battles in 1976. Reba and Charlie divorced in 1987.
Her second marriage was to steel guitar player Narvel Blackstock in 1989. Her husband was also her manager. She has three step-children and one biological son. Reba and Narvel divorced in 2015.
Trivia
She holds the record for the most number of ‘American Music Awards’ under the ‘Favorite Country Female Artist’ category.

Quotes By Reba McEntire | Quote Of The Day | Top 100 Quotes

See the events in life of Reba McEntire in Chronological Order