Advanced Search
Rainn Dietrich Wilson is an American television and movie actor, director, scriptwriter, and producer. He became a household name in 2005 with his brilliant portrayal of ‘Dwight Schrute’ in the US version of the popular British sitcom ‘The Office.’ Before becoming famous, he struggled for a decade without a proper platform to prove his talent. He then landed small roles in television series like ‘Six Feet Under,’ ‘Law & Order,’ ‘CSI: Crime Scene Investigation,’ ‘Entourage,’ etc. He also appeared in movies like ‘House of 1000 Corpses,’ ‘Almost Famous,’ ‘America’s Sweethearts,’ etc. Wilson was finally recognized for his quirky style of acting and distinctive screen presence. He has also directed three episodes of ‘The Office,’ the sixth season of ‘The Cover-Up,’ the seventh season of ‘Classy Christmas,’ and the eighth season of ‘Get the Girl.’ After ‘The Office,’ Wilson got more opportunities to prove his talent with projects like ‘The Rocker,’ ‘Monsters vs. Aliens,’ ‘Bonzai Shadowhands,’ etc. He was then cast in the Fox crime drama ‘Backstrom’ where he played the lead role of ‘Everett Backstrom.’ American People
Comedians
Podcasters
American Men
Washington Actors
Childhood & Early Life
Wilson was born on 20 January 1966, in Seattle, Washington, USA, to Shay Cooper and Robert G. Wilson. His father was an author, artist, and business consultant; he is the author of the science fiction novel ‘Tentacles of Dawn.’ His mother was a yoga teacher and actress.
Wilson was enrolled at ‘Kellogg Middle School’ and ‘Shorecrest High School.’ He played the clarinet and bassoon in high school. He describes his adolescence as ‘geeky’ and says that it was spent playing ‘Dungeons & Dragons.’
By the time he graduated, his passion for acting had blossomed and he made efforts to pursue it. He went to the ‘Tufts University’ and the ‘University of Washington’ where he learned acting.
He has an MFA from New York University's ‘Graduate Acting Program’ from the ‘Tisch School of the Arts.’ He was also a member of ‘The Acting Company,’ a foundation that many prestigious actors were part of. 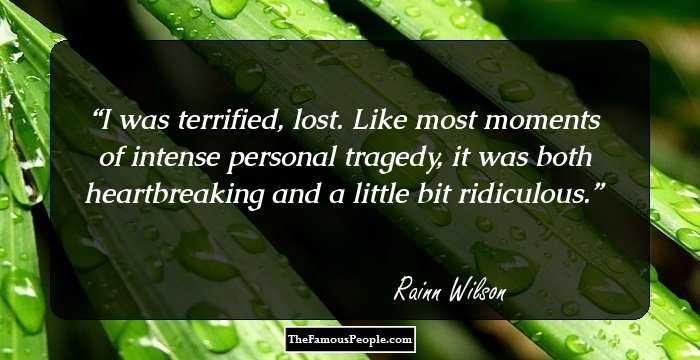 Quotes: Like, I
Continue Reading Below
Career
Wilson struggled at the start of his career and lack of opportunities forced him to take up odd jobs. His struggle came to an end when he landed a supporting role in ‘One Life to Live’ in 1997.
Wilson continued to land minor roles in movies like ‘Galaxy Quest’ (1999), ‘Almost Famous’ (2000), ‘America’s Sweethearts’ (2001), etc. Around this time, he also landed minor roles in television series like ‘Charmed’ and ‘CSI: Crime Scene Investigation.’
It was with Rob Zombie’s ‘House of 1000 Corpses’ in 2003 that Wilson established himself as an actor. He was noticed for his inventive and quirky style. Apart from Wilson, the film also starred Chris Hardwick and Sheri Moon Zombie.
Wilson’s quirky, eccentric, and distinctive style and technique was noticed by producer Greg Daniels. At the time, Daniels was looking for a perfect cast for the American adaptation of the popular British sitcom ‘The Office.’
He was hired for the project, and was cast to play the role of ‘Dwight Schrute’ alongside the likes of Steve Carell and John Krasinski. The first five seasons won four ‘Primetime Emmy Awards,’ and the series ran until 2013.
In 2000s, he appeared in movies like ‘Sahara’ (2005), starring Matthew McConaughey, ‘My Super Ex-Girlfriend’ (2006), starring Uma Thurman, ‘The Last Mimzy’ (2007), and ‘Juno’ (2007), starring Ellen Page, Jason Bateman, etc.
In 2007, owing to the success of ‘The Office,’ Wilson was cast in a lead role in Peter Cattaneo’s comedy ‘The Rocker’ (2008). The film received mixed reviews and was a disappointment at the box office.
He voiced the villainous alien overlord ‘Gallaxhar’ in the computer-animated science fiction comedy film ‘Monsters vs. Aliens’ in 2009. The film also had Seth Rogen and Reese Witherspoon voicing prominent characters. The same year, he co-wrote and co-produced ‘Bonzai Shadowhands.’
In 2015, Wilson was cast in ‘Backstrom’ to play the lead role of ‘Everett Backstrom,’ a self-disparaging detective, who is part of a bunch of unconventional criminologists. The series was based on Leif G. W. Persson's Swedish book series.
Continue Reading Below
From 2010 onwards, Wilson has appeared in many uncanny roles and has largely contributed as a voice actor in movies like ‘Peep World’ (2010), ‘Cooties’ (2014), ‘Army of One’ (2016), ‘Smurfs: The Lost Village’ (2017), ‘The Death of Superman’ (2018), and ‘Batman: Hush’ (2019).
He has also had recurring roles in CBS sitcom ‘Mom’ and web series ‘Star Trek: Discovery.’ He guest-starred in ‘Roadies’ (2016) and ‘Room 104’ (2018).
In 2019, he played ‘Michael’ in Roger Michell's drama film ‘Blackbird.’ The following year, he voiced ‘Lex Luthor’ in the adult animated science fantasy superhero film ‘Justice League Dark: Apokolips War.’ 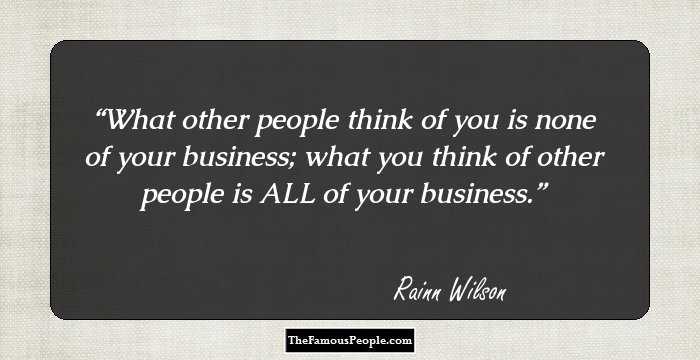 Quotes: You, Think, Business
Major Works
His portrayal of ‘Dwight Schrute’ in the US version of the popular British sitcom ‘The Office’ is considered one of his most prominent works. Before this critically acclaimed role, he struggled to make a name for himself in show business.
Personal Life & Legacy
Wilson met Holiday Reinhorn, a writer, in an acting class in his college. The couple got married near Kalama River in Washington in 1995. They have a son named Walter McKenzie Wilson. 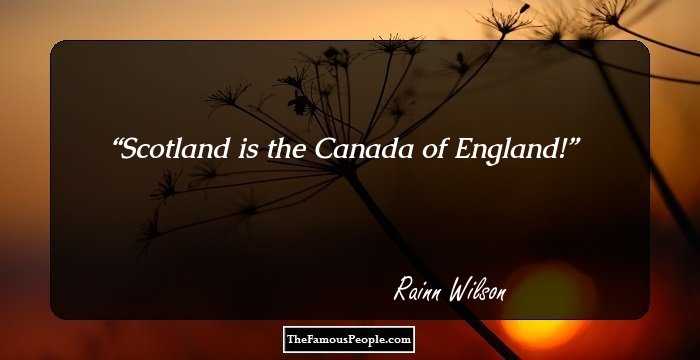 Trivia
Wilson currently resides in Agoura Hills, California, with his family.
He and his father are art collectors. They buy and sell fine art.
He founded the website ‘SoulPancake’ in 2008. It was featured on Oprah Winfrey’s ‘Satellite Radio Show.’
He and his family follow the Baha’I Faith.
He likes to play chess.

Quotes By Rainn Wilson | Quote Of The Day | Top 100 Quotes

See the events in life of Rainn Wilson in Chronological Order