Priyanka Chopra is an Indian film actress and singer who has emerged as one of the most popular and high-profile celebrities in India. Born in Jamshedpur, a small town in India, to physician parents, she was schooled in different cities across India until the age of thirteen, when she was sent to the United States. In America, besides academics, she also volunteered for dancing and singing activities, but desired to become an engineer or psychologist rather than a performer. Upon returning to her homeland, she took part in the Femina Miss India contest and was selected to represent India at the Miss World pageant, where she was crowned ‘Miss World 2000’. After winning the beauty pageant, she left her studies midway to join the film industry. Although she started her career with a Tamil film ‘Thamizan’ it was not long before she made her debut in Bollywood as the second lead in the 2003 film ‘The Hero’. She was noted for the glamorous role she portrayed in her next film ‘Andaaz’ and also earned a Filmfare Award for it. Thereafter, she starred in numerous box-office successes including ‘Aitraaz’, ‘Krrish’, ‘7 Khoon Maaf’, ‘Fashion’ and ‘Barfi!’. She has received several awards and much appreciation for her performances in films over the years. She has been a part of notable Hollywood films, including 'The Matrix Resurrections,' and 'The White Tiger.' From 2015 to 2018, she also starred in ABC thriller series 'Quantico.' Along with acting, she has also made a mark as an international singer with tracks such as ‘In My City’ and ‘Exotic.’ She published her memoir 'Unfinished' in 2021, which reached 'The New York Best Seller List.' She is married to American singer-songwriter Nick Jonas. She is quite popular on social networking sites, including Instagram where she has over 76.6 million followers. Katrina Kaif
18th July In History
DID WE MISS SOMEONE?
CLICK HERE AND TELL US
WE'LL MAKE SURE
THEY'RE HERE A.S.A.P
Quick Facts

Indian People
Models
Actresses
Indian Women
Cancer Models
Childhood & Early Life
Priyanka Chopra was born on July 18, 1982, in Jamshedpur, India, to Ashok Chopra, and Madhu Chopra. Both her parents were physicians in the Indian Army. She has a younger brother, Siddharth.
As her father was in army, he frequently got transferred. As a result, Priyant spent her childhood in cities such as Delhi, Pune, Lucknow, Bareilly, and Ladakh. She received her education from several schools including La Martiniere Girls' School, Lucknow and St. Maria Goretti College, Bareilly.

At the age of thirteen, she was sent to United States to pursue higher education. Here she lived with her aunt. In the USA, Priyanka attended schools in Newton, Massachusetts, Iowa and New York, as her aunt's family also moved frequently.

Apart from academics, she participated in several theatre productions and also learnt Western classical music, choral singing and Kathak dance. However, she wanted to become a software engineer or a criminal psychologist, rather than a performer.
Later, she returned to India and finished the senior year of her high-school education from the Army Public School, Bareilly. During this time, she also won the local ‘May Queen’ beauty pageant. 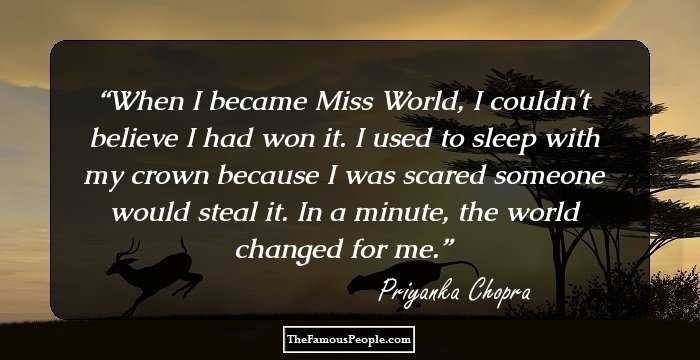 Quotes: Me, Believe
Continue Reading Below
Career
She entered the Femina Miss India 2000 contest where she finished second, winning the Femina Miss India World title. She then went on to represent India in the Miss World pageant, where she was crowned ‘Miss World 2000’.
In 2002, she made her big screen debut in the Tamil film, ‘Thamizhan’. The following year, she made her debut in a Bollywood film as the second female lead in the movie ‘The Hero: Love Story of a Spy’.
Later in 2003, she starred in the love triangle ‘Andaaz’, alongside Akshay Kumar. Her role in this movie was noted for the glamour quotient she added to the film.
In 2004, she starred in the romantic comedy, ‘Mujhse Shaadi Karogi’ which proved to be a big commercial success. The same year, she also starred in the thriller ‘Aitraaz’, portraying her first role as an antagonist and received much critical acclaim for her performance.
In 2005, she appeared in two successful ventures, ‘Waqt: The Race Against Time’ and ‘Bluffmaster’.
In 2006, she starred in the superhero film ‘Krrish’, and the action-thriller ‘Don’. Both the films were declared worldwide box-office successes.
In the following years, she appeared in several movies including ‘Big Brother’ (2007), ‘Love Story 2050’ (2008), and ‘Drona’ (2008).
In late 2008, she appeared inthe movie ‘Fashion’, a drama about the Indian fashion industry. Both, the film and her performance received much appreciation from the critics. She followed this with the comedy ‘Dostana’ which was also a financial success.
In 2011, she starred as a femme fatale in black comedy ‘7 Khoon Maaf’ which garnered her much acclaim from critics.
Continue Reading Below
In 2012, she starred in ‘Barfi!’, alongside Ranbir Kapoor and Ileana D'Cruz. Her performance received rave reviews and the film proved to be a major commercial success. The same year, her first international single, ‘In My City’, also debuted, featuring rapper will.i.am.
In 2013, apart from starring in the hugely successful movie ‘Krrish 3’, she also did two item numbers, ‘Babli Badmaash Hai’ and ‘Ram Chahe Leela’ which became chartbusters.
In 2013, her second single titled ‘Exotic’ was released, featuring American rapper Pitbull in the music video. Her third single, a cover of Bonnie Raitt's ‘I Can't Make You Love Me’ was released the following year.
In 2014, she appeared as the main lead in ‘Mary Kom’, a biographical film about the five-time female world boxing champion and Olympic bronze medalist, Mary Kom. The film received positive reviews from critics, and her performance was highly praised.

Priyanka Chopra has been a part of notable Hollywood films, including 'The Matrix Resurrections,' and 'The White Tiger.' From 2015 to 2018, she also starred in ABC thriller series 'Quantico.'

She published her memoir 'Unfinished' in 2021, which reached 'The New York Best Seller List.' 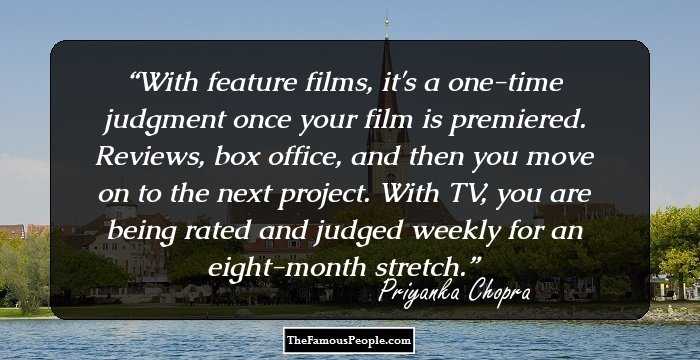 Quotes: You
Major Works
Priyanka Chopra received critical acclaim for her role of Jhilmil Chatterjee, an autistic woman, in the movie ‘Barfi!’ (2012). Several critics regarded it as the best performance of her career and one of the most flawless interpretations of a physical-psychological disability being presented on big screen.
Awards & Achievements
She was honored with the‘National Film Award for Best Actress’ for her role in the movie ‘Fashion’ (2008).
Continue Reading Below
She has won four Filmfare Awards in her career: Best Female Debut for ‘Andaaz’ (2003), Best Performance in a Negative Role for ‘Aitraaz’ (2004), Best Actress for ‘Fashion’ (2008), and Critics Award for Best Actress for ‘7 Khoon Maaf’ (2011).
In October 2012, her single ‘In My City’ won the Best International Debut award at the People's Choice Awards India. 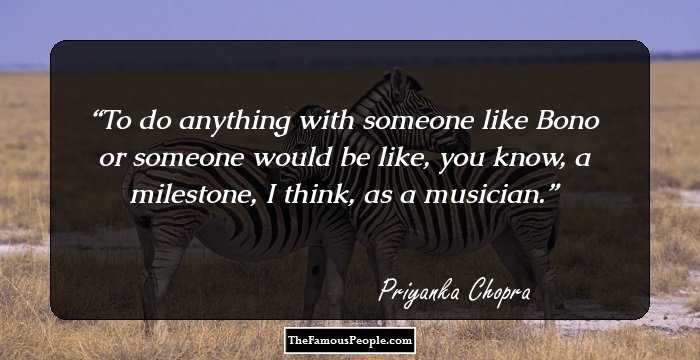 Although she is media-friendly but Priyanka has remained quite private about her personal life. She was, however, romantically linked to several of her co-actors, including Shahid Kapoor and Harman Baweja.

In 2018, she began dating American singer-songwriter and actor Nick Jonas. The couple got engaged in August 2018, amidst a lot of speculation by the media. It was a Punjabi Roka ceremony. In December 2018, the couple married at Umaid Bhawan Palace, Jodhpur, according to Hindu and Christian rituals and ceremonies.

Trivia
Priyanka Chopra has been associated with several philanthropic causes. These include: “Save Girl Child” campaign (a campaign against female infanticide and foeticide), and “Awakening Youth” (an anti-addiction programme). She was also appointed as a UNICEF Goodwill Ambassador for Child Rights

Quotes By Priyanka Chopra | Quote Of The Day | Top 100 Quotes

See the events in life of Priyanka Chopra in Chronological Order