Advanced Search
Peter Debye was one of the leading physical chemists of his time whose studies in the field of molecular structure helped mankind develop a greater understanding of the subject. Having studied under the likes of great stalwarts like Arnold Sommerfeld, he began his academic career at the ‘University of Munich’ after obtaining a degree in electrical engineering. His prowess in the field marvelled his colleagues and contemporaries alike, when he propounded a simpler explanation of the Planck radiation formula. His reputation received a further boost when he was asked to succeed the legendary theoretical physicist Albert Einstein at the ‘University of Zurich’. It was in Zurich that he made his most remarkable discovery. He studied the structure of covalent bond in great detail and explained it using the concept dipole moment. He even conducted various light scattering experiments with Paul Scherrer and the duo came up with the ‘Debye-Scherrer method’. With the Nazi oppression on the rise he moved to United States where he spent his remaining life teaching and eventually obtained an American citizenship. Recently there have been speculations of his alliance with the Nazis and that he demanded resignation of Jewish employees in the Kaiser Wilhelm Society, while he was the director. Read on to know more about his life and works. Yuan T. Lee
24th March In History
DID WE MISS SOMEONE?
CLICK HERE AND TELL US
WE'LL MAKE SURE
THEY'RE HERE A.S.A.P
Quick Facts

American Celebrities
American Men
Male Chemists
Aries Scientists
Male Scientists
Childhood & Early Life
Peter Joseph William Debye was born to William Debije and Maria Reumkens in the Maastricht town of Netherlands.
Since his birth on March 24, 1884, Debye spent most of his childhood in his native town. After completing his secondary schooling, in 1901, Peter went to attend the ‘Technische Hochschule’ (Technical Institute of Aachen) in Germany.
Joseph successfully completed his diploma in electrical engineering in the year 1905 and was recruited as a research assistant in Aachen the same year, where he was mentored by Arnold Sommerfeld. 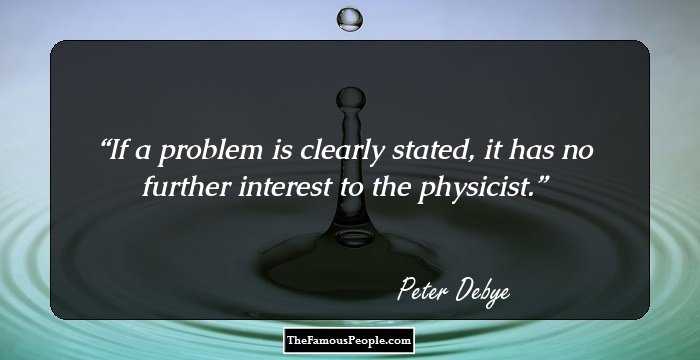 Continue Reading Below
Career
In 1906, Debye accompanied his mentor who was appointed at the ‘University of Munich’. Working on eddy currents, the budding scientist presented his first paper the following year.
For his doctoral dissertation, Peter studied the pressure resulting in rectangular surface subjected to electromagnetic radiation. He successfully defended his thesis and was awarded a degree in the year 1908.
He continued working as a Privatdozent in Munich until 1911, when he was appointed as a professor of theoretical physics in Zurich. The post at ‘University of Zurich’ was held by renowned physicist Albert Einstein who had moved to Prague.
The year 1912, was a milestone in his career as he made several pioneering discoveries. Through his studies on electric charges in asymmetric molecular systems, he established the relationship between dipole moments, dielectric constant and temperature.
He furthered the concept of specific heat propounded by Einstein, through careful observation of how the phonons contribute to specific heat capacity of a solid substance. The resulting methodology was named ‘Debeye Model’ after the eminent physicist.
Also in 1912, he returned to his homeland, where he accepted an appointment in the ‘University of Utrecht’. After a brief stint in Utrecht, this pioneering physicist moved to Germany the following year, where he taught experimental and theoretical physics to the students of ‘University of Göttingen’.
He studied the effect of thermal movement of atoms on x-ray analysis of crystals and along with Paul Scherrer he strived to achieve a better method to obtain x-ray images of crystals. The duo developed the ‘Debye-Scherrer method’ of deciphering symmetric crystal structures.
In his 1913 publication ‘Interferenz von Rötgenstrahlen und Wärmebewegung’ he described attenuation of x-ray scattering occurring due to thermal motion in condensed matter. His findings culminated in the ‘Debye factor’ which is an indicator of the decrease in intensity of diffraction spots.
The association with Scherrer continued and they established the atomic form factor which described the distribution of electrons in the atom.
Continue Reading Below
Peter moved to ‘Swiss Federal Institute of Technology in Zurich’ in the year 1920, where he was appointed director.
The director along with one of his prodigious student Erich Huckel conducted research on dissociation of electrolytes and in 1923, came up with the ‘Debye–Hückel equation’ an improvised version of the ‘theory of electrical dissociation’, propounded by Arrhenius.
Continuing to study scattering of light, the erudite physicist also elucidated the ‘Compton Effect’ observed in X-rays.
The year 1927, marked his move from Zurich to prestigious ‘University of Leipzig’ where he was granted the professorship of experimental physics.
With Nazi occupation of Germany, he moved to Berlin where he headed the physics department of ‘Kaiser Wilhelm Institute’ (‘Max Planck Institute’) in 1934. Two years later he also accepted a professorship in the ‘Fredrick William University’; a post he held simultaneously while working as the director of the ‘Max Planck Institute’.
Like most scientists of his time, he left Germany and settled in the United States of America. Here he was appointed a professor at the ‘Cornell University’ on 1940. Debye spent the remainder of his academic career at this institute until his retirement twelve years later.
The accomplished scientist continued his research on scattering of light even in retirement; which were now focussed on calculation of weight and size of macromolecules using techniques of light scattering.
Major Works
Debye’s most significant contribution to the field of chemistry was the study of covalent bonds in which regard he developed the ‘Debye Equation’. He correlated the dipole moments to better understand the electric charge distribution existing in an asymmetric molecule
Awards & Achievements
The eminent chemist was honoured with the ‘Nobel Prize in Chemistry’ in 1936, for his pioneering studies on dipole moments and use of x-ray diffraction to decipher the structure of molecules.
In the year 1963, he was presented with the ‘Priestley Medal’ and two years later the ‘National Medal of Science’ was conferred upon this accomplished scientist.
Personal Life & Legacy
Peter exchanged nuptial vows with Mathilde Alberer on April 10, 1913. The couple had two children; a son named Peter Paul Ruprecht and daughter named Maria. Their son went on to become a chemist and even assisted his father in several experiments.
The world saw the last of this eminent scientist on November 2, 1966 when he succumbed to a heart attack. He was interred in USA at the ‘Pleasant Grove Cemetery’.
Trivia
Jurrie Reiding in 2010 speculated that Peter Debye might have been a member of the Secret Intelligence Services of the British Government.

See the events in life of Peter Debye in Chronological Order