Peter Gabriel is regarded as one of the most influential singer-songwriters and musicians of his time. One of his unforgettable hits is, ‘Sledgehammer’ from the album, ‘So’. Interestingly, he was a drummer initially and was associated with a number of rock bands. Mike Rutherford once famously commented, ‘Pete was—and still is, I think—a frustrated drummer.’ Just as he started out as a singer with an alternative rock group called ‘Genesis’, there was a time when audiences often did not understand the words he was singing. This was attributed to the bad sound reinforcement system. He realized that the only way that he could attract crowds to listen to him was by drawing attention through other means. Thus he took to donning fancy costumes. He quit ‘Genesis’ and embarked on a solo career. Over a period of time, he developed an interest in world percussion and has since, collaborated with several famous musicians. Apart from music, he also has been an activist for various humanitarian causes. He has a longstanding association with ‘Amnesty International’ and has extensively worked for the same. In addition, he also declared support for the British Labour party when it won by a landslide margin under Tony Blair. On the personal front, he has been married twice and has had a live-in relationship. British People
Rock Singers
Pop Rock Singers
British Men
Male Singers
Childhood & Early Life
Peter Brian Gabriel was born to Edith Irene Allen and Ralph Parton Gabriel in Chobham, Surrey, England. His father was an electric engineer and his mother taught him to play the piano from a young age.
He attended a private primary school called Cable House, located in Woking, Surrey. Following this, he went to St. Andrews Prep School in Horsell and then Charterhouse School.
He founded the band ‘Genesis’ in the year 1967, teaming up with Charterhouse lads Tony Banks, Anthony Phillips, Mike Rutherford and Chris Stewart. 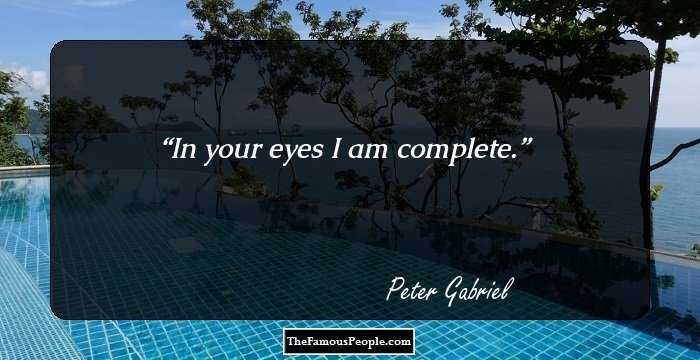 Quotes: I
Continue Reading Below
Career
Through his newly-formed band, he helped progressive rock advance to new levels of theatricality.
Possibly his greatest success with ‘Genesis’ was the concept album ‘The Lamb Lies Down on Broadway’ which released in 1974. He was the lead singer and main lyricist in this album.
Peter was approached by director William Friedkin for a small film. He left the band briefly in 1975 for this film, only to be back a week later. This sudden departure from the band shocked a number of his fans.
He permanently quit the band in 1976 following the news of his wife’s pregnancy. The next year, he made his solo debut with the single ‘Solsbury Hill’ which became an instant hit at the time of its release.
The second album came, which was self-titled in 1978 with the influence of guitarist Robert Fripp. This was an experimental album and did not sell highly.
His new interest in world music, primarily percussion, found its way into the third self-titled studio album. It is one of the first albums to use ‘gated drum’ sounds, with Phil Collins on the instrument.
In 1982, the album ‘Security’ was released, which became a huge commercial success largely due to the single ‘Shock the Monkey’. Despite startling videos and strange sounds, it sold well.
1985 saw the composition of another solo album called ‘So’, which was released the next year. A single called ‘Sledgehammer’ was greatly successful and its video made use of stop-action animation.
In 1986, basking in the success of ‘So’, he embarked on a benefit tour for Amnesty International. During this tour, he collaborated with musicians Sting and U2.
Continue Reading Below
He released ‘Passion: Music for the Last Temptation of Christ’ in 1989, which was composed by him and made extensive use of worldbeats. This album was largely successful and subsequently won awards.
There was a break after this album, during which he went through many personal upheavals. His 1992 album ‘Us’ echoed his tensions, resulting in relatively darker sounds and singles.
Throughout the 1990s, he was involved in the works of Real World Record Label, which was his maiden venture. He developed many multimedia projects with the group, such as ‘Xplora’ and ‘Big Blue Ball’.
There were few singing projects for films during this time. In 1998, he sang the song ‘That’ll Do’ for ‘Babe: Pig in the City’.
A solo album called ‘Up’ was released by him in 2002, after a decade. It was certified ‘gold’’ in Canada but did not sell as well in the United States. This album was followed by a lot of touring and two concert DVD’s ‘Growing Up Live’ and ‘Still Growing Up: Live & Unwrapped’.
In 2010, an album called ‘Scratch my Back’ was released, with covers of songs sung by Radiohead, Paul Simon and David Bowie, among others. This followed with ‘New Blood’ which released the following year.
2012 saw the celebration of 25 years since the release of his album ‘So’. This resulted in the sales of several deluxe versions of this record. 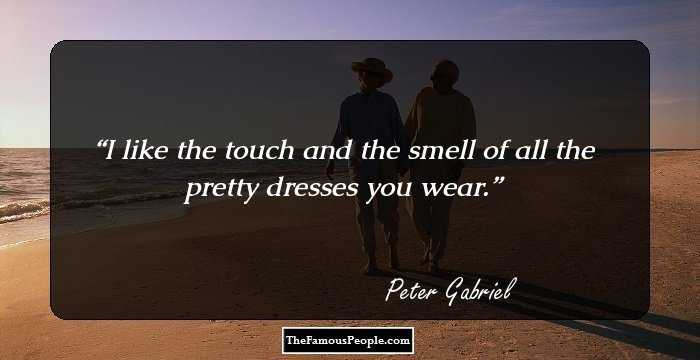 Quotes: You, Like, I
Major Works
Peter’s studio album ‘So’, released in 1986, charted at No. 1 on the UK Album Chart and No. 2 on the US Billboard 200. It went triple platinum in UK and five times platinum in US.
Continue Reading Below
Awards & Achievements
In 1987, he received the British Phonographic Industry Award for ‘Best British Male Solo Artist’ for his solo album ‘So’.
His lasting impact on music has been recognised by the music fraternity, who presented him the ‘Music Industry Trusts’ Award’ in 2004.
He received the ‘Man of Peace Award’ in 2006, given by Nobel Peace Prize laureates. 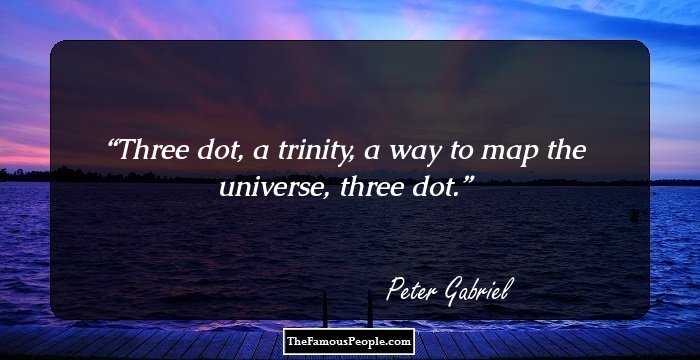 Personal Life &Legacy
He was married to Jill Moore from 1971 to 1987 and the couple has two daughters.
For sometime between the 1980s and 1990s, he is believed to have lived with the actress, Rosanna Arquette, but the two never married.
He married Meabh Flynn in 2002, with whom he has two sons; Isaac Ralph and Luc.
Apart from his own music, he continues to soldier on for the cause of world music. He has worked to educate Westerners about Yungchen Lamho, Nusrat Fateh Ali Khan and Yossou N’dour.
His work with ‘Witness’, a non-profit organisation for educating people about human right abuse, has been widely recognised.
Trivia
His company ‘Real World’ helps recognise several world musicians and their music. In this manner, he is contributing in his own way to the global music fraternity.

Quotes By Peter Gabriel | Quote Of The Day | Top 100 Quotes

See the events in life of Peter Gabriel in Chronological Order