25th March In History
DID WE MISS SOMEONE?
CLICK HERE AND TELL US
WE'LL MAKE SURE
THEY'RE HERE A.S.A.P
Popularity Index
10
Novelists #1493
Writers #5289
Quick Facts

awards: 1971 - Fiction Award for the best original and unpublished fiction

Who was Paul Scott?

Paul Scott was a well-known British novelist, playwright and poet who wrote the famous tetralogy, the ‘Raj Quartet’. Despite his early ambitions of becoming a poet, he trained in accountancy and worked with the British Intelligence Department and the Indian Army upto the ‘Quit India’ movement. While he was employed as an Officer Cadet in India, Malaya and Burma, his experiences on the war front powered his drive to write. Thus, he wrote his own poetry, a number of radio plays and punched out several novels based on his experiences. However, he did write a number of other novels such as ‘A Male Child’, ‘The Mark of the Warrior’, ‘The Chinese Love Pavilion’ and ‘Sahibs and Memsahibs’. The most famous of all his works was his tetralogy series titled the ‘Raj Quartet’. The books in the tetralogy series outline the final years of the British occupation of India from multifarious viewpoints. A Booker Prize recipient, all of Scott’s works focused on Indian themes and/or characters - even in those novels that were set outside the geographical boundaries of India. Scott, with his substantial literary output, became one of the leading figures of Indian/British literature.

British Men
Male Writers
Aries Writers
Male Novelists
Childhood & Early Life
Paul Mark Scott was born on March 25, 1920 to Frances and Thomas Scott in Southgate, Middlesex. His father was a commercial artist and his mother, though socially inferior, had great artistic ambitions.
Young Scott studied at Winchmore Hill Collegiate School but he dropped out of the same because his father’s poor financial condition. He worked as an accounts clerk for C.T. Payne and in the evening, attended bookkeeping classes.
He enlisted to the British Army as a private, in 1940 and was directly assigned to the Intelligence Corps. Thus, began his journey in the army which would later become the subject for a number of his novels. 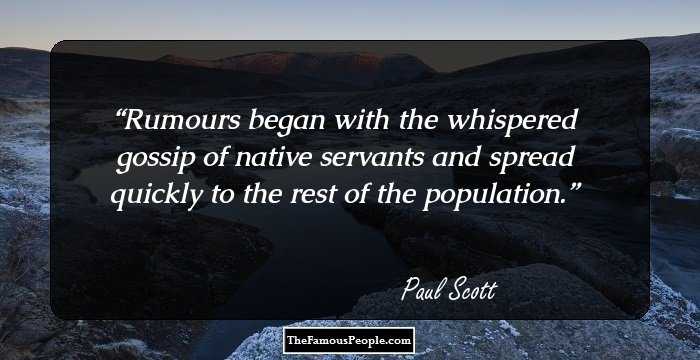 British Writers
British Novelists
Aries Men
Career
Paul Scott published his first collection of poems titled, ‘I, Gerontius’ in 1941, but during this time, he did not take his writing career seriously, since he was already conscripted to the army.
In 1943, he was posted as an officer-cadet to India, where he was commissioned. He ended the war as a Captain in the Indian Army Service Corps. It was during this time that he deeply and irrevocably fell in love with India.
He was employed as an accountant for two small publishing houses ‘Falcon Press’ and ‘Grey Walls Press’, in 1946. Four years later, he moved to the literary agent ‘Pearn, Pollinger & Higham’, where he subsequently became its director.
He published his first novel, ‘Johnny Sahib’, inspired by his experiences at war and in India, in 1952. Despite experiencing several pitfalls while writing the novel, he managed to get it printed and it received moderate success. The same year, he wrote a radio-play for BBC titled, ‘Lines of Communication’.
In 1953, he authored, ‘The Alien Sky’, which was also titled ‘Six Days in Marapore’. It was his second book. Three years later, he published a well-known book titled, ‘A Male Child’.
He penned his next work, ‘The Mark of the Warrior’, in 1958. The same year, he wrote his second radio-play for BBC called ‘Sahibs and Memsahibs’.
This was subsequently followed by ‘Chinese Love Pavilion’, in 1960. All these books reflected his experiences at the war front and his love for India.
Although he had written a number of novels by now, his earnings from his works were extremely meager. During this time, he was also working as a literary agent. He decided to quit his job as a literary agent and worked on becoming a full-time author.
From 1962 to 1964, he wrote a few more novels such as ‘Birds of Paradise’, ‘The Bender’ and the satirical comedy, ‘The Corrida at San Feliu’, but in vain. He still did not achieve the kind of success he was expecting.
Continue Reading Below
He flew to India in 1964 because he felt creatively drained and wanted to be reacquainted with his friends and the country that he had grown to be obsessed with.
In 1966, he published ‘The Jewel in the Crown’, a novel that would go on to become the first installment of the famous, ‘Raj Quartet’. Two years later, he published the second installment of the ‘Raj Quartet’ series, ‘The Day of the Scorpion’.
The third book in the series was published under the title, ‘The Towers of Silence’ in 1971, followed by the last publication in the series, ‘A Division of the Spoils’, three years later.
These four books give an insight into the final days of the British Raj in India and chart crucial details about a number of prominent figures, the Partition of India and the days during the collapse of the British regime.
After he finished writing the ‘Raj Quartet’, he got back to teaching and from 1976 to 1977; he served as the visiting professor at the University of Tulsa. In 1977, he wrote a coda to the ‘Raj Quartet’ called, ‘Staying On’, which earned him the Booker Prize. 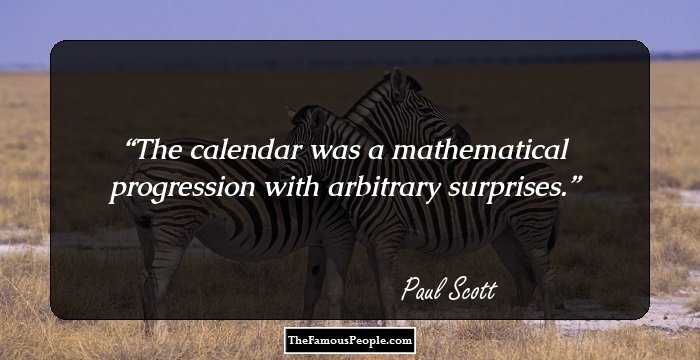 Major Works
The ‘Raj Quartet’, a tetralogy was published from 1966-1974. The series consisted of the books, ‘The Jewel in the Crown’, ‘The Day of the Scorpion’, ‘The Towers of Silence’ and ‘A Division of the Spoils’. Largely considered to be his major works, the ‘Raj Quartet’ is regarded as an important masterpiece because of the kind of research that went into writing these novels.
From information related to political readers to child rape and the ‘Quit India’ movement, these four novels give a detailed insight into the events leading upto the collapse of the British Raj in India from the viewpoints of Hindus, Muslims and other characters. Of the four books published, ‘The Tower of Silence’ was the most successful one.
He authored ‘Staying On’, a finale, in 1977, which is also considered one of his best works. The same was adapted for a television film by Granada TV and paved the way for the television adaptation of ‘The Jewel in the Crown’. This is also considered one of his important works, because it won him the prestigious ‘Booker Prize’.
Awards & Achievements
He won the Yorkshire Post ‘Fiction’ Award for ‘The Towers of Silence’, in 1971.
He was presented the ‘Booker Prize’ for ‘Staying On’, in 1977. 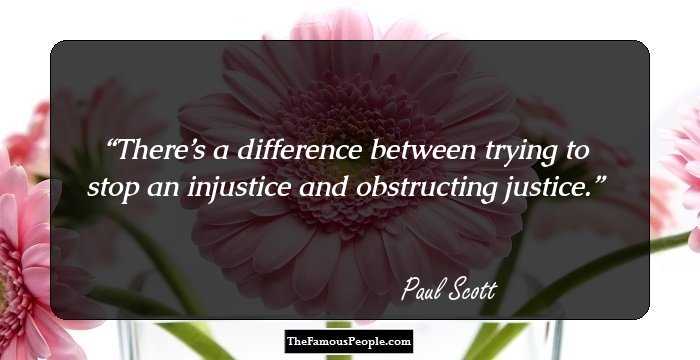 Quotes: Trying
Personal Life & Legacy
He married Nancy Edith Avery, who was also known as ‘Penny’, in 1941. He had two daughters with her - Carol and Sally.
He was a bisexual by nature – it was reflected in his first novel of the ‘Raj Quartet’ series, ‘The Jewel in the Crown’.
It is believed that he was an alcoholic and would sometimes get very aggressive with his wife. It was this behavior of his, which eventually led to a divorce.
Towards the end of his life, he was diagnosed with colon cancer. Just before his death, he was to attend the ‘Booker’ presentation, but could not as a result of his illness. He passed away on March 1, 1978 due to cancer at the Middlesex Hospital, in London.
Trivia
Around 6,000 letters of this British novelist’s personal correspondence can be found at the McFarlin Library at the University of Tulsa.
You May Like

See the events in life of Paul Scott in Chronological Order