Paul Gardner Allen was the co-founder of Microsoft and a philanthropist. He was born and brought up in Seattle, Washington, by his Jewish parents who were both librarians. He was always interested in science and computers and did his schooling from Lakeside School in Seattle. It was there that he met Bill Gates at the age of 14 and both the computer enthusiasts started to experiment with different languages and programs of computers. He is a Washington State University dropout and the one who convinced Gates to dropout from Harvard. Together they created Microsoft in 1975, in New Mexico. After the initial workings and handling the dealings of the company, Allen left the company because he was struggling with cancer and had to go through a series of painful radiation therapies. After recovering, he started investing in non-profit organizations for the benefit of the general public in the field of health and science. He also owned two professional sports teams in America. His charitable philanthropic work earned him many awards and accolades. He was known to be the kind of billionaire who liked to share his wealth with the needy. A well known recluse, he kept his personal life very private.
Continue Reading Below 3218
DID WE MISS SOMEONE?
CLICK HERE AND TELL US
WE'LL MAKE SURE
THEY'RE HERE A.S.A.P
Quick Facts

American Celebrities
IT & Software Entrepreneurs
American Men
Aquarius Entrepreneurs
American Entrepreneurs
Childhood & Early Life
Paul Allen was born on January 21, 1953, in Seattle, Washington, to Kenneth Samuel Allen and Edna Faye Allen. His father was an associate director of the University of Washington libraries. His mother also worked as a librarian.
Allen’s parents helped him and his sister Jody develop a wide variety of interests and used to take them to museums, galleries and concerts. He started showing great interest in science from an early age. When he was 10 years old, his mother, Faye used to hold science club meetings for his grade school.
Allen went to the Lakeside School in Seattle - it was a private school and it is here that he met and became close friends with Bill Gates. At that time Allen was 14 years old and Gates was 12 and both were computer enthusiasts. It was in Lakeside’s Teletype terminal that both the friends started to develop their programming skills on numerous time-sharing computer systems.
Allen got admission into the Washington State University after scoring 1600 on his SAT but decided to discontinue his studies after two years in order to work for Honeywell in Boston, as a programmer. He also convinced his close friend and fellow computer enthusiast, Bill Gates, to drop out of Harvard University to work on an innovative project. 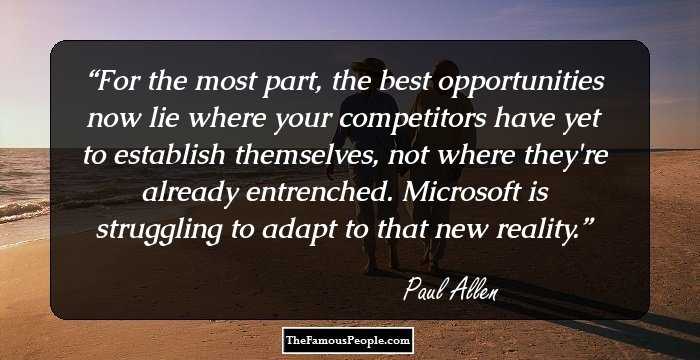 The Sexiest Men Of 2020, Ranked
Career
In 1975, Allen and Gates started to market a BASIC computer programming language interpreter and co-founded Microsoft in Albuquerque, New Mexico. It was Allen who came up with the name ‘Microsoft’ for the company, as documented in a Fortune magazine article years later.
In 1980, Allen materialized a deal for Microsoft to buy a Quick and Dirty Operating System, which was invented by Tim Paterson, an employ at the Seattle Computer Products. This deal led the company to develop Disk Operating System, which they delivered to IBM and ran it on IBM’s PC line. The IBM deal made Allen and Gates rich and famous.
In 1982, Allen was detected with Hodgkin’s lymphoma and underwent several months of Chemotherapy. Due to his degrading health conditions Allen took himself away from the workings and businesses of Microsoft and resigned from his position on the Board of Directors in 2000. He was still the senior strategy advisor to the company’s executives.
In 1986, Allen founded the Paul G. Allen Family Foundation for the advancement of health and human services - his contribution to the development of science and technology. The foundation gives 30 million US dollars every year as grant to various humanitarian and scientific projects.
In 1992, Allen and David Liddle founded the Interval Research Corporation. It was a Silicon Valley-based laboratory which was finally disbanded after making over 300 patents. Some of these are famous patent infringement lawsuits against big shot companies like Apple, Yahoo!, YouTube, Google, Facebook, Netflix, eBay, AOL, Office Depot, OfficeMax, etc.
In 1993, Allen bought 80 percent of Ticketmaster by investing 243 million US dollars into it. Under his leadership, Ticketmaster was moved into internet in 1995 by showing searchable database and in 1996 its first transaction on the internet took place. The company was made public in the same year.
Allen purchased his first professional sports team—the Seattle Seahawks NFL team—in 1996. The threat from the former owner of the team, Ken Behring, to Southern California inspired him to buy the team. In 1998, he purchased his second team the Portland Trail Blazers NBA for a sum of 70 million US dollars from a Californian real estate developer Larry Weinberg. By 2010, the Portland Trail Blazers were valued 356 million US Dollars and ranked at number 14 on NBA teams.
In 2003, Faye G. Allen Center for Visual Arts was established in the Washington State University – it was named after Allen’s mother. He also donated 14 million US dollars in the establishment of the Paul G. Allen Center for Computer Science & Engineering, which was designed by LMN Architects of Seattle. For years Allen donated a large sum of money to the University of Washington Medical School.
In 2003, Allen, along with his sister Jo Lynn, founded the Allen Institute for Brain Science by donating 100 million US dollars to it. The data founded in the organization is free and publically available through Allen Brain Atlas application. It is a non-profit organization.
Continue Reading Below
In 2008, he established the Allen Spinal Cord Atlas online mouse gene map by investing 41 million US dollars into it. The project helps the researches to access the existing spinal cord research data to understand better how a disease or an injury can affect the spinal cord system. The map helps in unlocking new diagnoses for existing human neurological disorders by pointing at the places where the genes are active.
In 2011, Allen announced the launch of the first private space transport system called the Stratolaunch Systems. It is a project for the orbital launch of a dual bodied jet aircraft which will carry a rocket to a high altitude. In the same year, his yacht Octopus was listed in the list of motor yachts and was named as the largest yacht in the world in 2003. The yacht has two helicopters, two submarines, a basketball court, swimming pool, etc.
Allen, along with his sister Jo, was the co-owner and executive producer of a filmmaking production company in Seattle called Vulcan Productions. The aim of the company is to finance the innovative and depth oriented independent film projects. In 2011, the company financed a film called ‘The Emotional Life’ which was a documentary on the subject of psychology that inspects human desire and craves for happiness.
In 2011, Allen’s memoir was published under the title of ‘Idea Man: A Memoir by the Cofounder of Microsoft’ and in 2012 the paperback version of the memoir was released with a new epilogue. In the book he mentioned how he and Bill Gates developed Microsoft and how they were ready to launch the idea even when it initially sounded too superfluous. 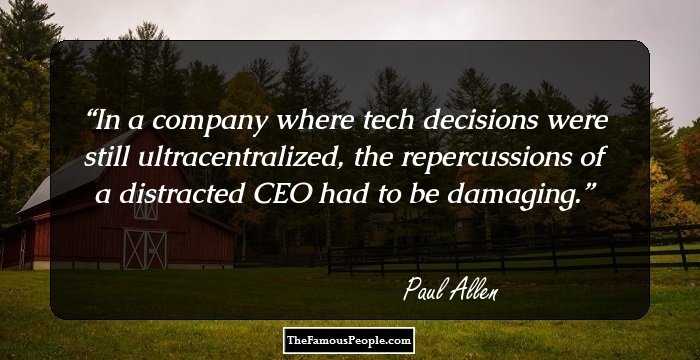 Awards & Achievements
In 2008, Allen received an honor from the Seattle-King County Association of Realtors for his distinguishable commitment to the non-profit organizations in the Pacific Northwest and lifetime giving of around 1 billion US dollars.
In 2008, he received the Herbie Hancock Humanitarian Award from the Thelonious Monk Institute of Jazz for his innovative contribution to the business world and for being a global philanthropist.
Personal Life
Allen never married in his life but had his share of many girlfriends that he was very private about.
He was once romantically connected to Jerry Hall who joined him on his yacht to France after breaking up with Mick Jagger.
Continue Reading Below
Abbie Philips sued Allen for sexually assaulting her. He had hired her to run his film and TV production company called 'Storyopolis.'
Allen was diagnosed with Hodgkin's lymphoma in 1982, and underwent several rounds of radiation therapy and a bone marrow transplant.
In 2009, he was diagnosed with non-Hodgkin lymphoma, which was successfully treated but it relapsed in October 2018, and he succumbed to the same on October 15, 2018.
Trivia
In his memoir, Allen mentioned that Bill Gates tried to rob him off his fair share from Microsoft when he was suffering from cancer.
He was known by the names of ‘Idea Man’ and ‘the bitter billionaire’.
He was known to throw lavish parties but he was so obsessively private that he made his guests sign a non-disclosure agreement.
He was such a well-known recluse that he was known as the ‘Loch Ness Monster of the Internet Age’.
He owned many fantastic homes, including a villa at Cap Ferrat in London’s Holland park and in New York.
Allen loved to play guitar.
He once mentioned to his friend and author Douglas Adams that he felt frustrated with his wealth.
You May Like

See the events in life of Paul Allen in Chronological Order