Born with a ‘silver spoon’, Paris Hilton is a multi-millionaire heiress of the Hilton Group of Hotels. She is also a media-magnate, jetsetter, actress, model, party-goer and writer. She might have seen only the ‘greener’ side of the grass ever since she was a little girl, but life did take her on its share of twists, turns, loops and downfalls throughout her interesting yet controversial career. Acting was always her ‘first love’ and she went on to star in a number of forgettable but noticeable films including, ‘House of Wax’, ‘The Bling Ring’, ‘Zoolander’, ‘Wonderland’ and ‘The Hottie and the Nottie’. She is also the proprietor of a fashion line, a perfume line, a night-life line and her own records group, ‘Heiress Records’. Her life was all smooth- sailing, dotted with a number of relationships, music, partying and opulence. However, one scandalous sex tape titled, ‘One Night in Paris’, rocked her and she soon, became the pet of the paparazzi; both, good and bad. Though in today’s context, her acting skills may seem a little passé, she has hit it big with her entrepreneur skills and her music albums, collaborating with a number of international artistes like Pitbull and Nicki Minaj. Paris Whitney Hilton was born on February 17, 1981 to former actress, Kathy Richards and real estate kingpin, Richard Hilton. She is the eldest of her other three siblings - Nicholai, Barron and Conrad. She is of German, Norwegian, Italian and Irish ancestry.

From a very young age, Paris saw nothing but grandeur and lavishness. She studied at St. Paul the Apostle Church and School from where she graduated in 1995.

At the age of fourteen, the family moved to the East Coast and she then attended an array of schools including ‘Convent of the Sacred Heart’, ‘Provo Canyon School’, ‘Canterbury Boarding School’ and ‘Dwight School’, before dropping out as a high school junior.

She began modeling from very early on and signed her first modeling contract with the agency ‘T Management’ at the age of nineteen. She loved to model and soon became a regular face on tabloids and at party scenes.

By 2001, young Paris Hilton earned the standing of a ‘socialite’ and was identified as ‘New York’s leading IT Girl’. The following year, she was given a small role in the horror film, ‘Nine Lives’. 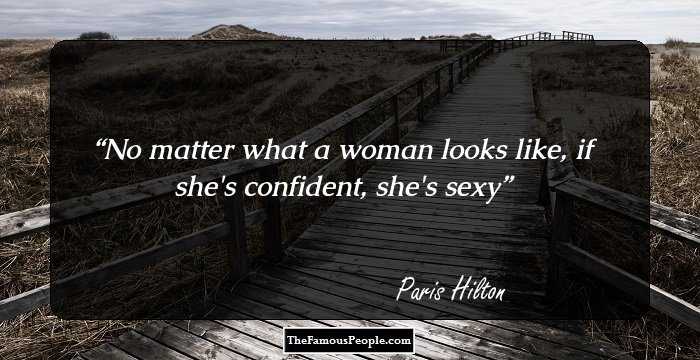 Her first breakthrough as an actress came in 2003, when she starred in her very own reality show, ‘The Simple Life’ along with her best-friend, Nicole Richie. The ratings for her show were extremely high as Hilton was just freshly out of a sex-tape scandal.

In 2004, Hilton launched her very own lifestyle brand and designed a 10-piece line collection, which was launched on Amazon.com for sale. The same year, she authored her autobiography, ‘Confessions of an Heiress: A Tongue-in-Chic Peek Behind the Pose’ and also launched her fragrance line.

Her second book, ‘Your Heiress Diary: Confess It All to Me’ was released in 2005, and she launched her second line of perfumes, ‘Just Me’. She was also cast for the film, ‘House of Wax’ opposite Elisha Cuthbert and Chad Michael Murray.

‘The Simple Life’ had three successful seasons on Fox, but was cancelled after a fall-out between Hilton and Richie for unspecified reasons. However, the two renewed their friendship the next year.
In 2006, a new season for ‘The Simple Life’ was being produced and the same year, she decided to venture out into the music world. She debuted with her self-titled album, ‘Paris’, which became a huge hit, contrary to what the public believed it would be.

Just when Paris Hilton’s life was going smoothly, she was arrested in September 2006, for ‘driving under the influence of alcohol’, leading to the suspension of her license. This arrest complicated the shoot of her season for ‘The Simple Life’.

In December 2006, she produced and starred in the movie, ‘National Lampoon’s Pledge This!’ which was released directly to video.
In 2007, she released a hair extensions line called ‘DreamCatchers’. The same year, her license was once again suspended and she was confined to jail.
However, she could not serve her jail term and instead was confined to her house with an electronic monitoring device due to an indefinite health condition. The same year, she released another perfume line called, ‘Can Can’.
Continue Reading Below
In 2008, she created a line for dogs called, ‘Little Lily’. She also appeared in an episode of ‘My Name is Earl’ and appeared in a video online, ‘Paris Hilton Responds to McCain Ad’ with a leopard print swimsuit.
On September 30, 2008, she appeared in the reality show, ‘Paris Hilton’s My New BFF’, where she looked to make a new best friend. The series became a huge hit. The success of this show led her to star in the cult film, ‘Repo! The Genetic Opera’. The same year, she also released another range of fragrance titled, ‘Fairy Dust’.
She began filming for the British spin-off of the American reality show, ‘Paris Hilton My New BFF’ titled, ‘Paris Hilton’s British Best Friend’, which aired in 2009. Many fans were also pleasantly surprised when she appeared in an episode of ‘Supernatural’.
In July 2009, she launched another fragrance line, ‘Siren’ which won important awards. It was during this time, she involved herself in the design of a new sunglasses collection, which was launched in October the same year.

2010, proved to be both fruitful and disastrous for Paris. During the FIFA World Cup, she was caught smoking marijuana and was shepherded by the local police. She was, however, later freed. She was once again detained at the airport for possessing cannabis, in Corsica.

However, not everything was gloomy for Paris as she released her 10th fragrance line, ‘Tease’, which is believed to have been inspired by the character of Marilyn Monroe.

The same month of the fragrance’s release, she was arrested in Las Vegas for the possession of cocaine. After this, airport authorities around the world including the ones in Japan kept an annoyingly close watch on Hilton and she cancelled her promotional trips to other South East Asian countries, due to fear of being arrested for possession of drugs.

In 2010, she appeared in the hit documentary, ‘Teenage Paparazzo’, which aired on HBO. The same year, she lent her voice for a character in the film, ‘The Dog Who Saved Christmas Vacation’. Towards the end of 2010, she introduced her own motorcycle team, who performed in the 125cc World Championship.
In 2011, she made a comeback on television with, ‘The World According to Paris’, which was not very successful.
Continue Reading Below
From 2012 to 2013, she was involved in a number of projects including coming up with a new sunglasses line, her new perfume line, ‘Dazzle’, appearing in a Korean music video and bagging roles in the reality shows, ‘Paradise Hotel’ and ‘The Real Housewives of Beverly Hills’. Since then, she has also appeared in the 2013 film, ‘The Bling Ring’.

In October 2013, Paris Hilton came up with the first single from her upcoming second studio album, "Good Time". The song also featured rapper Lil Wayne and it debuted at number 18 on the US Billboard Dance/Electronic Songs chart. The second single, "Come Alive", and the third single "High Off My Love", from her upcoming second studio album, were released in July 2014 and May 2015, respectively. 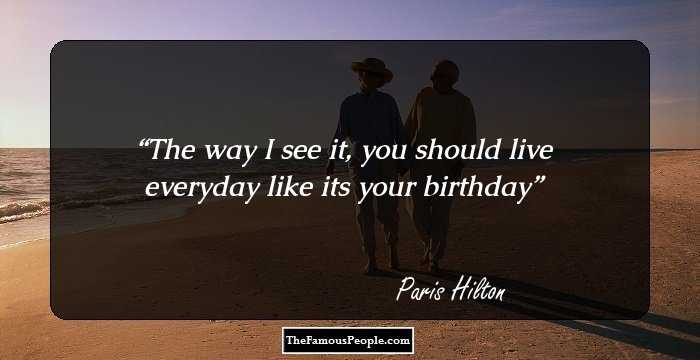 ‘The Simple Life’, which ran from 2003 to 2007, was a hit-reality series that aired on Fox and E!, starring Paris Hilton and Nicole Richie. The show depicted the two best-friends involving themselves in day-to-day, low-paying jobs. Although the show was cancelled in between, it went on to win a number of awards and has even spawned international remakes such as ‘La Vie Rurale’ and ‘Ciao Bella’. This is considered of the major highlights of Hilton’s career and the premier episode went on to gather 13,000,000 viewers.

Her autobiography, ‘Confessions of an Heiress: A Tongue-in-Chic Peek Behind the Pose’, which released in 2004, was panned by literary critics but still managed to make to the ‘New York Times bestseller’ list. The popularity of the book went on to spawn a sequel, ‘Your Heiress Diary: Confess It All to Me’.

Her debut studio album under Heiress Records, ‘Paris’ released on August 22, 2006, and sold near 197,000 copies in the United States till 2011. The two hit singles, ‘Stars are Blind’ and ‘Nothing in this World’ went on to feature in a number of popular music charts and were placed at number 6 on the U.S. Billboard 200. 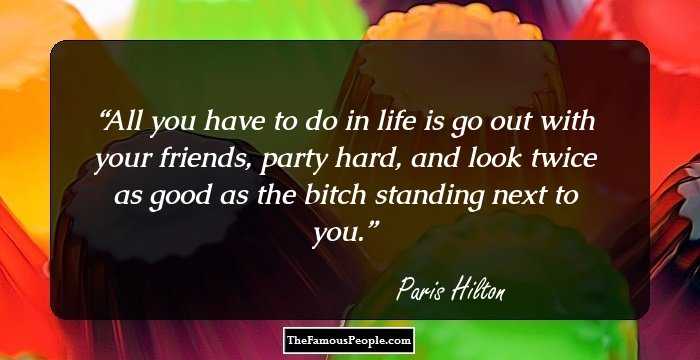 Paris Hilton has been a paparazzi pet and everywhere she goes, she attracts the attention of the media, be it positive or negative. Her popularity plummeted in 2009, due to her low-key public appearances.

Her intimate act with her then-boyfriend, Rick Salomon was released online and was titled, ‘One Night in Paris’. The video earned millions and Hilton filed suit, receiving $400,000 from the video.

On January 3, 2018, Paris Hilton announced her engagement to actor, Chris Zylka. However, they lated parted ways. In 2019, she was romantially linked to businessman Carter Reum. In Februrary 2021, the couple got engaged. In November 2021, they got married.

Trivia
This famous heiress and socialite, trademarked her popular quote, ‘That’s hot’, in 2004.
This famous personality of the ‘House of Wax’ fame, wears size-11 shoes, which are not easily available in the readymade footwear market. Hence, her designers always have to custom-make her shoes.
She is a frequent party-goer and is a close friend of model Kim Kardashian. Hilton is also an avid dog-lover.
Recommended Lists:
Miscellaneous #71
Fashion #203

Quotes By Paris Hilton | Quote Of The Day | Top 100 Quotes

See the events in life of Paris Hilton in Chronological Order