Claude Monet was a renowned French painter who used to capture his daily life’s best moments on canvas. He is one of the most celebrated figures in the field of art, and an inspiration to many budding artists. Unlike many other contemporaries of his times, Claude observed his immediate environment, and painted it on canvas. His work is also known for the effective use of light. One of Claude’s greatest contributions was his painting style, which was later termed ‘Impressionism’. Artists who had a similar style of painting were since then called ‘Impressionists’. The term was coined because of one of his famous works, the ‘Impression, Sunrise’. Unlike other paintings of its era, this painting seemed like an unfinished sketch, making it seem really different. Though Monet was considered a great painter by many others, he often doubted his abilities and got depressed. His decision to become an artist made him face several challenges in life. Once he even tried jumping into a river from a bridge owing to acute financial crisis. Several of Claude’s paintings are displayed at famous museums around the world even till date, and continue to inspire many. 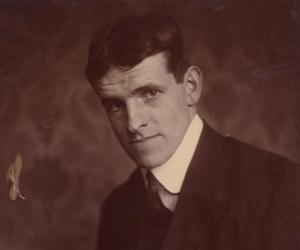 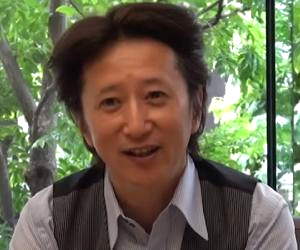 French Celebrities
French Artists & Painters
Male Artists & Painters
Scorpio Artists & Painters
Scorpio Men
Childhood & Early Life
Claude Monet was born on 14 November 1840 to Louise Justine Aubr�e Monet and Claude Adolphe Monet. Claude was the second son born to the Monet couple. His father was a businessman and his mother was a singer. In 1841 Claude’s parents got him baptised and named his Oscar Claude Monet.
Claude’s father wanted him to become a part of the family business, and manage their grocery store. However Claude aspired to become a painter. His decision to pursue art had initially disappointed Claude’s father.
In 1851, Monet pursued his education in arts from ‘Le Havre secondary school of the arts’. While studying, Claude also made several caricatures using charcoal, and sold them in exchange for money. He was well-known for many such charcoal caricature works.
In 1856, Claude met the famous French landscape painter Eugene Brodin, while wandering around the beaches of Normandy. Claude considered Eugene his mentor, a man who helped him polish his artistry skills. It was Eugene who introduced Claude to oil paints, which changed the latter’s approach towards art. 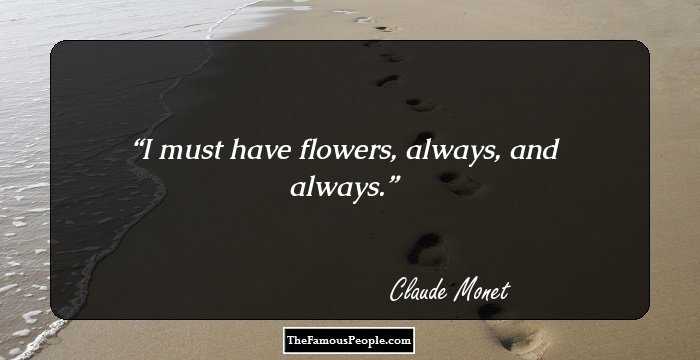 Famous Beautiful Women With Green Eyes
Career
In 1861, Claude joined the first regiment of ‘The African Light Cavalry’. Though he had a seven-year commitment with the cavalry, Claude had to quit after just 2 years, since he had contracted typhoid. It is believed that Claude’s aunt and the famous painter Johan Jongkind had a role to play in bringing him out of the army.
In 1865, Claude participated at the ‘Salon’, an annual art show, which was held at Paris. Two of Claude’s marine landscape paintings were selected. Though his work won Claude a lot of admiration, he couldn’t earn much through his work.
In 1866, Claude Monet presented one of his most famous works ‘Camille’ which was also known as ‘Woman in The Green Dress’ at the ‘Salon’ art show. The painting won Claude many accolades, and turned out to be a milestone in Claude’s career.
By 1868, Claude was in an acute financial crisis which led to depression and suicidal tendencies. Luckily he found a patron in the form of Louis Joachim Guadibert. Guadibert’s interest in Monet’s work, made the latter more financially stable.
In 1870, Claude along with his family shifted base to England, following the outbreak of the Franco-Prussian war. During his stay here, Monet observed the works of other artists like Joseph Mallord William Turner and John Constable. Through their paintings Monet got a whole new perspective about use of colours. Claude also met Paul Durand- Ruel during his stay in London. Paul was the painter’s first art dealer.
By 1871, Monet moved from London to Zaandem, in Netherlands. Claude made 25 paintings during his stay here, which spanned only a few months.
After the Franco-Prussian war ended in 1871, Claude relocated to Argentuil, a place located at the outskirts of France, and situated on the banks of the Seine river. He stayed here for a period of seven years, and produced several paintings of great significance.
1874 was an eventful year in Monet’s life, when his work the ‘Impression, Sunrise’ was up on display at the Society’s 1874 April exhibition. It was considered to be Claude’s best work. The next two decades, saw Claude earning a lot of money through his paintings. 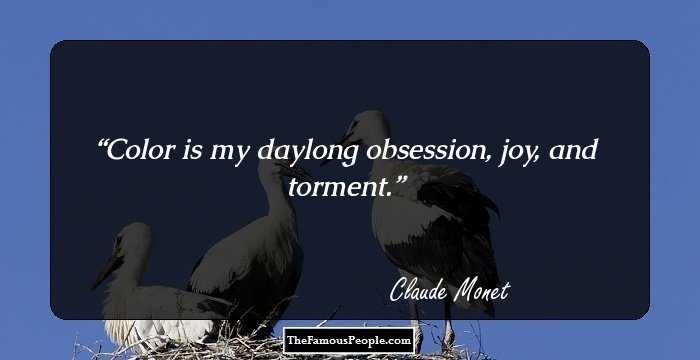 Continue Reading Below
Major Works
One of Claude’s works which has made him one of the legendary artists of all time is the ‘Impression, Sunrise’. This painting showed how ‘Havre’s Harbor’ looks during the morning fog. The work seemed like an incomplete sketch, compared to the other paintings of those days. This work of Monet’s, was considered unusual by many critics, who coined a new term for such kind of art, known as ‘Impressionism’
Personal Life & Legacy
Claude lost his mother in 1857, when he was just 17. This led to great misery in Claude’s life, since she was the only person back then who was very supportive of his artistic skills.
Camille, the model of Claude’s famous paintings such as ’The Woman in Green’ and ‘Women in The Garden’, was the first woman in his life. She was pregnant with their first child in 1868.
In 1870, Claude and Camille got married. They had two children named Jean and Michel. Post marriage, the couple, along with their first child moved to England, after the Franco-Prussian war broke out. Claude continued using his wife as a model in several of his paintings.
Camille was diagnosed with tuberculosis in 1876. The couple’s second son was born two years later, which made matters worse for Camille in terms of her health.
Camille’s ill health took the form of uterine cancer. She finally died in the year 1879. She was only 32 at the time of her death. Camille’s death put Claude Monet into depression for several months.
Claude then met Alice Hoschede, who was his friend’s wife. After Alice’s husband Ernest Hoschede fled to Belgium due to bankruptcy, Claude and Alice spent time together. Claude even moved to Alice’s home in Paris along with his kids.
In 1883, the couple along with all their children moved to a farmhouse near Giverny. The house became a place of great convenience for the family as it had a painting space, garden, and was quite close to the schools of the kids. Claude stayed here for many years.
Claude and Alice finally tied the knot in 1892, after the latter’s husband passed away. Alice was also the model of several paintings of Claude. Alice passed away in 1911 due to ill health.
At the age of 86, Claude passed away on 5 December 1926. He succumbed to lung cancer. He was cremated at a cemetery near Giverny, close to his farmhouse. 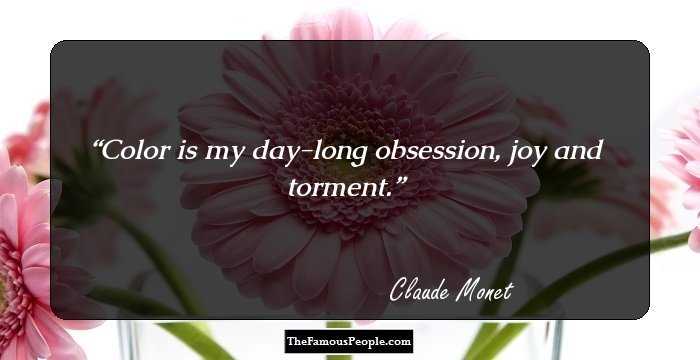 Quotes: Art
Trivia
Claude often went into modes of depression. He destroyed as many as 500 of his own paintings by burning or throwing them away.
One of his famous paintings ‘Falaises Pres de Dieppe’ was stolen twice. Though it was recovered the first time, it was stolen again in 2007 and has since been missing.
Claude’s paintings have been on display at several museums around the world. In 2004, one of his paintings ‘Effects of Sun in the Fog’ was reportedly sold for a whopping US$20 Million, in an auction held at London.
You May Like

Quotes By Claude Monet | Quote Of The Day | Top 100 Quotes

See the events in life of Claude Monet in Chronological Order