Nicola Sturgeon is a Scottish politician who became the first woman to be elected as the First Minister of Scotland and the Leader of the Scottish National Party (SNP); she achieved this feat in November 2014 and is currently serving her second term as the First Minister. Joining the party at the age of 16, she entered the Scottish Parliament as an additional member for the Glasgow electoral region in 1999 before becoming a member for Glasgow Govan in 2007. She served in the Shadow Cabinets of Alex Salmond and John Swinney prior to being appointed Deputy First Minister of Scotland under Salmond. A law graduate, she briefly worked as a solicitor before joining politics fulltime. She has actively campaigned against replacing the Trident nuclear weapons system, vigorously argues for Scottish independence, is a self-proclaimed feminist, and also supports environmental issues. Acknowledging how she benefitted from free tuition, she has pledged never to re-introduce fees. She is very vocal about her opinions and had strongly criticized Donald Trump prior to the 2016 United States presidential election. Jess Phillips
Political Leaders #202
Leaders #259
19th July In History
DID WE MISS SOMEONE?
CLICK HERE AND TELL US
WE'LL MAKE SURE
THEY'RE HERE A.S.A.P
Quick Facts

Nicola Ferguson Sturgeon was born on July 19, 1970, in Ayrshire Central Hospital in Irvine, North Ayrshire, Scotland, as the eldest of three daughters of dental nurse Joan Kerr Sturgeon and electrician Robin Sturgeon. She was a very shy child growing up in Prestwick and Dreghorn, and preferred to read books than talking to people.

She attended Dreghorn Primary School in 1975-82 and Greenwood Academy in 1982-88 before pursuing bachelor's degree in law at the University of Glasgow, which she obtained in 1992, followed by a Diploma in Legal Practice. While studying, she was an active member of the Glasgow University Scottish Nationalist Association and the Glasgow University Students' Representative Council.

Upon graduation, she joined as a legal trainee at McClure Naismith, a Glasgow firm of solicitors, and after qualifying as a solicitor in 1995, began working at the Bell & Craig legal firm in Stirling. However, she was uncomfortable with the corporate law firm lifestyle, and later chose a less lucrative job at Drumchapel Law Centre in Glasgow in 1997.

Nicola Sturgeon, who was spurred into joining active politics by the negative effects of the policies of UK Prime Minister, Margaret Thatcher, especially unemployment, joined the Scottish National Party in 1986 out of defiance. Despite Labour Party dominating Scottish politics at the time, she chose SNP, which only had 11.8% vote share, because she believed that independence was required for the nation to prosper.

She soon became Youth Affairs Vice Convener and Publicity Vice Convener of the party, and in the 1992 general election, unsuccessfully ran for the Glasgow Shettleston constituency. In May that year, she was also the SNP candidate for the Irvine North ward on Cunninghame District Council, but again failed to win the seat.

In 1994, she unsuccessfully ran for the Baillieston/Mount Vernon ward on Strathclyde Regional Council and in 1995, she once gain failed as the SNP candidate for the Bridgeton ward on Glasgow City Council.�

She tasted success in 1997 when she won the Glasgow Govan seat for thE SNP in the 1997 general election.

She tasted success in 1997 when she won the Glasgow Govan seat for thE SNP in the 1997 general election.

In June 2004, she announced her candidacy in the election for the SNP leadership after the-then leader, John Swinney, resigned and former leader, Alex Salmond, decided not to contest. However, Salmond eventually announced his candidacy, reportedly because Sturgeon's chances of winning was low, following which the latter withdrew her candidacy and instead ran for depute leadership under Salmond.

After they won the leadership contest in September 2004, she led the SNP at the Scottish Parliament until Salmond, then an MP, was elected as an MSP in 2007. Sturgeon�won the Glasgow Govan seat and SNP came out as the largest party in the hung Scottish Parliament following the 2007 election, subsequently forming a minority government.

She was appointed the Deputy First Minister and Cabinet Secretary for Health and Wellbeing under First Minister Salmond, and subsequently gained recognition internationally for her handling of the 2009 flu pandemic. She continued to serve in the same positions after SNP earned majority in the 2011 election, but following cabinet shuffle the next year, she became Cabinet Secretary for Infrastructure, Investment and Cities.

She headed the party campaign on the referendum on Scottish independence, which was rejected in September 2014 with 55.3%�votes against it, following which Salmond resigned as the First Minister and SNP Leader.

Nicola Sturgeon resigned as Depute Leader and on November 14, 2014, she was chosen as the leader of the SNP.

After Alex Salmond officially resigned as First Minister of Scotland, Nicola Sturgeon succeeded him on November 20, 2014, and the same day, was appointed to the Privy Council of the United Kingdom. She led SNP to win 56 of 59 seats in Scotland in the 2015 UK general election, and despite missing majority by two seats, SNP remained the largest party following the 2016 Scottish Parliament election.

In May 2016, she successfully defeated Liberal Democrat leader Willie Rennie to retain her office for a second term, and in June, revealed plans for a second independence referendum. The decision was fuelled by the fact that 62% of Scottish voters were against Brexit, Britain's proposed exit from the EU.

Even though SNP became the largest political party in 16 out of 32 councils, it failed to secure full control in any council area, and even lost seven councilors compared to the previous election. However, Sturgeon successfully led her party to victory in the European Parliamentary elections, as well as the 2019 United Kingdom general election in Scotland.

Nicola Sturgeon, who dated SNP Chief Executive Officer Peter Murrell since 2003, got engaged to him on January 29, 2010, and married him months later on July 16 at Òran Mór in Glasgow. In 2016, in a new book, she opened up about having the "painful experience" of losing a baby five years back.

See the events in life of Nicola Sturgeon in Chronological Order 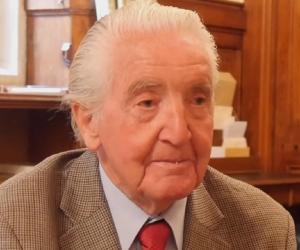