(50th Speaker of the US House of Representatives)

Newt Gingrich is an American politician who served as the 50th speaker of the US House of Representatives from 1995 to 1999. A member of the Republican Party, he became the first Republican to hold the office in four decades. With a long history in politics, he served as the US representative for Georgia's 6th congressional district from 1979 until his resignation in 1999. He was academically inclined as a young man and earned his PhD in European history from Tulane University. He joined the history department at West Georgia College, where he coordinated a new environmental studies program. However, he lost interest in an academic career soon and gravitated toward politics. After a few unsuccessful attempts to enter politics, he won a seat in Georgia's 6th congressional district in the 1978 elections. He became a popular politician and was re-elected five times. In 1995, he was made the 50th speaker of the United States House of Representatives. However, his popularity began to wane soon after he took up this post. He was blamed for partial government shutdowns and several ethics charges were filed against him. He was forced to resign in disgrace in 1999. Newt Gingrich was born as Newton Leroy McPherson on June 17, 1943, in Pennsylvania, to Kathleen "Kit" (née Daugherty) and Newton Searles McPherson. He is of English, Scottish, German, and Scots-Irish descent. His parents’ marriage fell apart even before Newt was born.

His mother married a man named Robert Gingrich in 1946. Shortly after the marriage, Robert adopted Newt and gave him his name. The family moved to Europe due to his adoptive father’s career obligations. His mother went on to have three daughters with her second husband.

The family eventually returned to America and Newt Gingrich graduated from Baker High School in Columbus, Georgia, in 1961. He developed an interest in politics during this time even though he was more inclined towards an academic career. 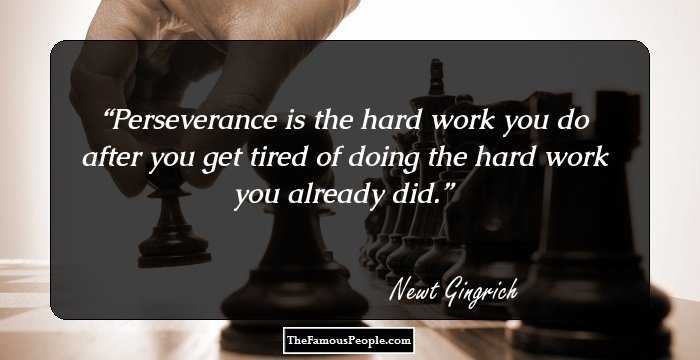 Newt Gingrich joined the history department at West Georgia College as a member of the faculty in 1970. He coordinated a new environmental studies program. However, he lost his interest in academics and decided to join politics instead.

He made his first unsuccessful bid for political office in 1974. He was unsuccessful in his 1976 bid as well. Finally, in 1978, he was successful in becoming the US representative for Georgia's 6th congressional district.

He proved to be a popular politician and won re-elections five times. He, along with many other Republicans came up with the Contract with America legislative agenda, which laid out ten policies on pressing issues such as term limits, welfare reform, a balanced budget, and crime.

After the 1994 midterm elections, the Republican Party gained control of Congress. Newt Gingrich was hailed as the architect of this victory and his popularity rose among the Republican factions. He was made the House Speaker by the Republicans in December 1994 and took office in January 1995.

Later in 1995, the United States federal government shutdowns took place as a result of conflicts between Democratic President Bill Clinton and the Republican Congress. The shutdowns continued into January 1996. This incident greatly affected Newt Gingrich’s popularity and many people blamed him for the shutdowns.

The Democrats filed 84 ethics charges against Newt Gingrich during his tenure as speaker. However, all of them except for one were dropped. The House officially reprimanded him in January 1997, and he was disciplined for an ethics violation.

His popularity continued to decline and several House Republicans attempted to replace him as speaker. Republican conference chairman John Boehner and Republican leadership chairman Bill Paxon tried to issue Gingrich an ultimatum asking him to resign or be voted out. Gingrich refused to resign.

In the ensuing months, Newt Gingrich continued to lose favor among the Republicans and a Republican caucus became ready to rebel against him. Finally, after sensing that there was no way he could extend his position, he relented and announced his resignation. He officially stepped down in January 1999.

He continues to remain involved in national politics after his resignation. He founded the Center for Health Transformation, a professional service organization, in 2003. He was in favor of the Medicare Prescription Drug, Improvement, and Modernization Act of 2003.

He, along with Hillary Clinton announced the proposed 21st Century Health Information Act in 2005. In the ensuing years, he served on several commissions, including the US Commission on National Security/21st century.

He has been teaching at the United States Air Force's Air University since the 1980s and became the longest-serving teacher of the Joint Flag Officer Warfighting Course in 2010. He is also an honorary Distinguished Visiting Scholar and Professor at the National Defense University.

He is also a successful businessman and is the founder of many profitable companies. He was an advisor to the Canadian mining company Barrick Gold and served as a consultant for Freddie Mac, a government-sponsored secondary home mortgage company.

Newt Gingrich is best known for advocating the legislative agenda The Contract with America during the 1994 congressional election campaign. The contract mentioned in detail the actions promised by the Republicans if they became the majority party in the US House of Representatives. It is believed that the contract helped secure a decisive victory for the Republicans.

Newt Gingrich married his former high school geometry teacher Jacqueline May "Jackie" Battley in 1962. He was 19, and she was 26 at that time. The couple had two daughters.

He was involved with multiple women during his marriage to Jackie. He became seriously involved with a woman named Marianne Ginther and divorced Jackie to marry her.

He married Marianne Ginther in 1981. Their marriage was a troubled one. In 1993, he began an affair with House of Representatives staffer Callista Bisek, a much younger woman. He was still married to Marianne at that time and decided to divorce her to pursue this new relationship.

He filed for divorce in 1999 and married Callista a few months later in 2000.

See the events in life of Newt Gingrich in Chronological Order