Advanced Search
Neil Simon was an American playwright and screenwriter. He hasdwritten around thirty plays and same number of movie scripts that have been mainly adapted from his stage writing. He was the writer with most number of Academy Award and Tony Award nominations. Simon started out by writing for television and wrote for successful TV shows like, ‘The Phil Slivers Show’ and ‘Your Shows of Shows’ - his writing received acknowledgement through Emmy Awards. This initial success encouraged him to write his own creative piece and after working on it for three years, he came out with his successful Broadway ‘Come Blow your Horn’ in the early 1960s. There was no looking back for him after it and he wrote more plays and screen scripts. His writing career was so booming that one season he had four successful plays showing on Broadway at the same time and he became the only living playwright who has a theatre named after him - Neil Simon Theatre in New York. Simon’s work ranges from romantic comedy to farce to more serious dramatic comedy. He touched topics like marital conflict, infidelity, sibling rivalry, adolescence, fear of aging, etc. with his writing. Most of his inspiration comes from the source of his unhappy and tormenting childhood, where he faced poverty and volatile marriage of his parents. Writing for him was always a source of emotional stability, a technique he imbibed as a child when he used to take solace in the comedy movies of Charlie Chaplin. American Celebrities
Screenplay Writers
American Men
New York University
Tall Celebrities
Childhood & Early Life
Neil Simon was born in The Bronx, New York, to Irving Simon and Mamie Simon. His father was a garment salesman while mother a homemaker. He grew up in Washington Heights with his older brother, Danny Simon.
Most of Simon’s childhood was spent struggling with the Great Depression and his parents’ difficult marriage - his father deserted the family from time to time. To cope with difficulties of his childhood, he took comfort in comedy and writing.
He attended the DeWitt Clinton High School and after clearing the school he joined the Army Air Force Reserve at New York University. He started writing professionally during these years. In 1946, he attended the University of Denver. 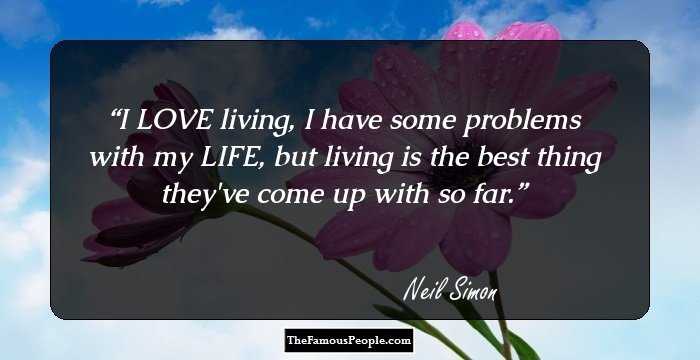 Quotes: Life, Love, Living, I
Continue Reading Below
Career
After getting discharged from the army and completion of his graduation from the university, Simon took up a job as a mailroom clerk for Warner Brother’s East Coast Office, Manhattan.
A few years later, he quit his job and joined his brother in writing for radio and television. They struggled alongside Woody Allen, Mel Brooks, etc. and wrote for shows like, ‘The Phil Slivers Show’ and ‘Your Show of Shows’.
Simon was nominated for Emmy several times for his TV writing, which inspired him to move to theatre and in 1961, his first Broadway, ‘Come Blow Your Horn’ was released at the Brooks Atkinson Theatre. It ran for 678 performances.
Soon Simon was known as the ‘hottest new playwright on Broadway’ and he released more productions––‘Barefoot in the Park (1963), ‘The Old Couple (1965)’, ‘Plaza Suite (1968)’, ‘The Gingerbread Lady (1970)’, ‘The Good Doctor (1973)’, ‘Chapter Two (1977)’, etc.
Although his plays were smash hits and audiences loved the elements he touched with his writing like satire, romance, family clashes, difficult marriages etc. but the critics continued to detest him and called him a mere ‘writer of gags’.
Simon went through a low period and faced failures with ‘The Good Doctor (1973)’ and ‘God’s Favorite (1976)’. Although, when he moved to California, his writing revived and he produced classics like, ‘California Suite (1978)’ and ‘Chapter Two (1979)’.
By this time, he had entered into movies and wrote screenplays for at least 20 movies. Although it did not interest him much as his love for theatre writing was way greater.
Even so, when his plays were offered to be turned into movies by producers, Simon took the charge of converting them into screenplays himself so as to control the quality of the product.
Some of his writings adapted for movies and television are: ‘The Heartbreak Kid (1972)’, ‘Seems Like Old Times (1980)’, ‘Max Dugan Returns (1983)’, ‘The Slugger’s Wife (1985)’, ‘The Sunshine Boys (1995)’, ‘Laughter on the 23rd Floor (2001)’, etc.
Continue Reading Below 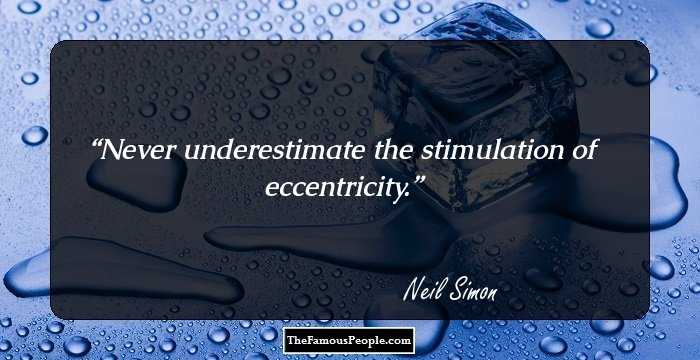 Quotes: Never
Major Works
Although Simon actively wrote for television, movies and theatre but his contribution as a playwright is considered to be most prominent. He wrote award winning Broadways like, ‘The Old Couple (1965)’, ‘Lost in Yonkers (1991)’.
Personal Life & Legacy
Simon was married five times. These included to dancer Joan Baim (1953-73), actress Marsha Mason (1973-1981), twice to Diane Lander (1987-1988 and 1990-1998) and actress Elaine Joyce (1999-present).
He had three children: Nancy and Ellen (from his first marriage) and Bryn who is Diane Lander’s daughter from her previous marriage, whom he adopted.
He died of pneumonia on 26 August 2018 at the age of 91. He was also reported to have had Alzheimer’s disease. 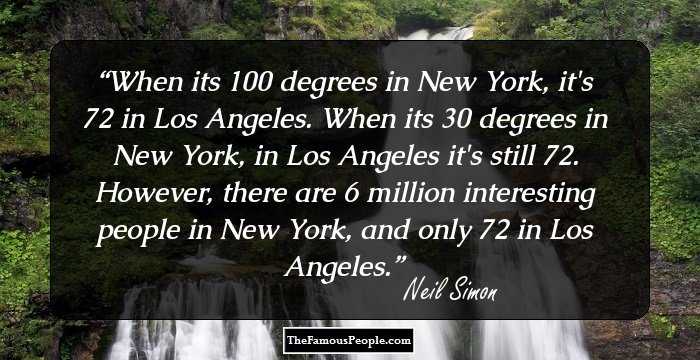 Trivia
He was on the Board of Selectors of Jefferson Awards for Public Service.
Simon received several academic honors like: Doctor of Humane Letters from Hofstra University and a Doctor of Laws from Williams College.
He was the only living playwright to have a New York theatre named after him - Neil Simon Theatre.
He was an honorary member of the Walnut Street Theatre's board of trustees.
He had received four Academy Award nominations for his screenplays.

See the events in life of Neil Simon in Chronological Order 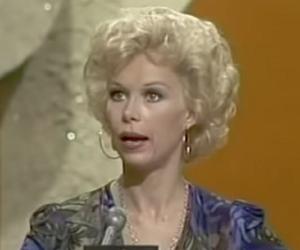