Advanced Search
Molly Qerim is a well-known sports anchor and moderator for ESPN. She has served as breaking news reporter for ESPN 2’s ‘Fantasy Football Now’ for which she received the prestigious Emmy award. She has also worked as a correspondent for ESPN network’s ‘MMA Live’. Besides this, Qerim has worked as a sports reporter for the NFL network. She has hosted NFL Network's shows ‘NFL Fantasy Live’ and ‘NFL AM’. She has also served as a correspondent for CBS Sports Network and covered its NCAA Tournament, the U.S. Open, National Signing Day and college football. The American broadcaster has worked as a studio anchor as well for shows like ‘SEC Tonight’, ‘Full Court Press’, ‘SEC Tailgate Show’, ‘Bracket Breakdown’ and ‘MaxPreps Lemming Report’. And there’s more to come! She has covered Fuel TV’s UFC. All these projects have today made Qerim one of the most sought after reporters/journalists of the broadcast industry. Currently, she is serving as the United Way Ambassador and is working on their ‘Team NFL’ program. When it comes to Molly Qerim’s online popularity, hundreds of thousands of people follow her on Instagram, Twitter and Facebook. Peter Doocy
31st March In History
DID WE MISS SOMEONE?
CLICK HERE AND TELL US
WE'LL MAKE SURE
THEY'RE HERE A.S.A.P
Quick Facts

Women Media Personalities
American Female Tv Anchors
American Media Personalities
American Female Media Personalities
Continue Reading Below
Personal Life
Molly Qerim was born on March 31, 1984 in New Haven, Connecticut. She is half Italian and half Albanian. She graduated from the University of Connecticut and earned her Bachelor of Arts degree in communications with a minor in business administration. Later on, she received her master’s degree in broadcast journalism from the Quinnipiac University.
In 2016, Qerim started dating former professional basketball player Jalen Rose. Besides this, no other information regarding the American correspondent’s personal life is available to the media. However, when it comes to her salary and net worth, Qerim is reported to earn a lot from her journalistic and hosting career. As of 2016, her annual salary and net worth were estimated to be about $500k and $3 million respectively.
Recommended Lists: 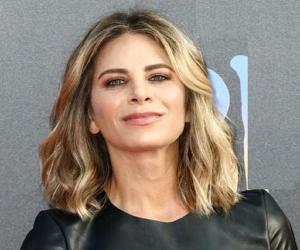