Advanced Search
Modest Petrovich Mussorgsky was a renowned 19th century Russian composer, one of the members of the group of prominent composers known as "The Five". He was born into a noble family. Following his family tradition, he joined the Imperial Guard at the age of seventeen, but resigned two years later to devote his life to music. By then, he had begun to study music with Balakirev, also becoming close to Stasov, Cesar Cui, and Rimsky-Korsakov. Although he respected western music, his ambition was to achieve a Russian identity and often drew inspiration from Russian history, folklores, and other nationalist themes, slowly evolving an original and bold style. Unfortunately, due to an intense alcohol addiction and recurring nervous breakdowns, he could leave only a small body of work, a few of which were performed in his lifetime. After his death at the age of forty-two, many of his well-meaning friends edited and performed his works and for many years Mussorgsky’s works were known in such edited versions only. Later, many of his important works were discovered in their original form and published in a collected edition in 1928. Igor Fyodorovic...
21st March In History
DID WE MISS SOMEONE?
CLICK HERE AND TELL US
WE'LL MAKE SURE
THEY'RE HERE A.S.A.P
Quick Facts

Russian People
Aries Musicians
Male Composers
Male Musicians
Russian Composers
Childhood & Early Years
Modest Petrovich Mussorgsky was born on 21 March 1839, in Karevo into a distinguished family that traced its roots to Prince Rurik of the ninth century. But their family name, Mussorgsky, was derived much later from a 15/16 century ancestor, Roman Vasilyevich Monastyryov.
His father, Pyotr Alexeyevich Mussorgsky, was an illegitimate child of a landlord father and a serf mother. Unable to follow his family tradition of military service or inherit family wealth, he initially entered civil service. But once his birth was legitimized, he settled down in the family estate.
His mother, Yulia Ivanovna nee Chirikova, was a trained pianist. The couple had four sons out of which Modest was born the youngest. His first two brothers, both called Alexie, died in infancy. His third and only surviving brother, Filaret Mussorgsky, was three years his senior.
As he turned six, he first started studying piano with his mother. Later, the job was taken up by their German governess, who also supervised their education, which did not go much beyond fluency in German and French.
By the age of seven, Modest began to play small pieces by Franz Liszt. When he was nine years old, he played a grand concerto by John Field in front of house guests.
In August 1849, both Modest and Filaret was sent to St Petersburg to study at the Saint Peters School, an elite German language school popularly known as the Petrischule, to be trained for military service. There, they put up with their family friend, a school inspector.
Modest soon impressed the school inspector with his skill at the piano. His father, who was equally aware of his younger son’s musical talent, employed Anton Gerke, future professor of music at the St. Petersburg Conservatory, to teach him piano.
In 1851, Modest performed a concerto rondo at the home of a lady-in-waiting. The recital was so brilliant that it delighted Gerke who presented him with a copy of ‘A flat Sonata’ by Beethoven. In the same year, he was transferred to Komorov Preparatory School, where he studied for one year.
In 1852, he entered the Cadet School of the Imperial Guards, instantly becoming very popular with his classmates for his skills in piano. In the same year, he wrote his first composition, ‘Podpraporshchik’ (Porte-Enseigne Polka), which he dedicated to his classmates.
At the Cadet School, he received special privileges, possibly because the director’s daughter was also a student of Gerke, being allowed to continue his piano lessons with him. Nonetheless, it was a tough place for a sensitive boy like him and for quick relief, he soon turned to alcohol. 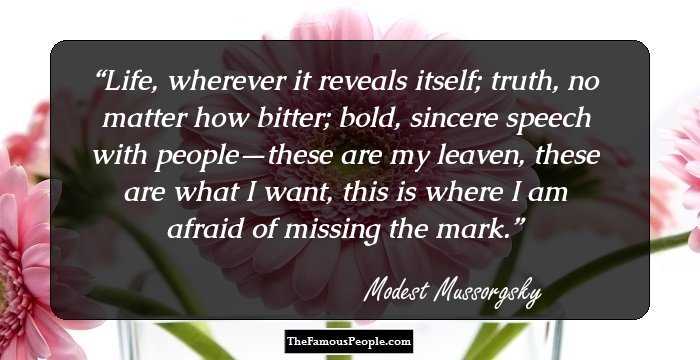 See the events in life of Modest Mussorgsky in Chronological Order