Igor Fyodorovich Stravinsky was a Russian-born composer and conductor, whose works had a revolutionary impact on the musical thought of the early twentieth century Europe. Born in the late nineteenth century to a musician father in Russia, he was sent to the University of Petersburg to study law; but he never became a lawyer. Instead, he studied music under noted composer Nikolai Rimsky-Korsakov and went on to become one of the twentieth century’s most celebrated composers. He first achieved international fame at the age of twenty-eight with a ballet called ‘The Firebird.’ Since then, his life as well as his creations has been divided into three distinct phases. Initially, his workswere based on Russian myths and folklores. Experts have named this period of his life as the Russian phase.Next from 1920 onwards, he began to live in France and cut off from Russia andstarted following Neo Classicalism; experts call this phase as the French phase. The last phase is known as the American phase. In this period, he becamean American citizen and mainly used serial compositional techniques in his creations. Almost all his pieces have a distinction of theirown and many of them have found a place in the standard repertory. Russian Celebrities
Composers
Conductors
Russian Men
Male Pianists
Childhood & Early Life
Igor Fyodorovich Stravinsky was born on 17 June 1882 in Oranienbaum near Saint Petersburg in Russia. His father, Fyodor Ignatievich Stravinsky, was a well-known bass opera singer and actor, attached to the Mariinsky Theatreof St. Petersburg. His mother was Anna (née Kholodovsky) Stravinsky.
Not much is known about Stravinsky’s childhood except that he was a lonely child and did not have any real friend. Finding solace only in music, hestarted playing the piano at a very young age.
By the age of fifteen, he had mastered Mendelssohn's Piano Concerto in G minor and finished a piano reduction of a string quartet by Glazunov.In spite of such affinity to music, he entered the University of St. Petersburg in 1901 to study law at the insistence of his parents.
Here, he befriended Vladimir Rimsky-Korsakov, whose father Nikolai Rimsky-Korsakov was a celebrated composer.In the summer of 1902, he visited their home in Heidelberg, Germany, where he showed some of his compositions to the senior Rimsky-Korsakov.
Impressed by what he heard, the noted composersuggested that heshould take music lessons in private, rather than entering the Saint Petersburg Conservatoire. The idea appealed to him immensely.
Stravinsky’s father died from cancer in late 1902. This left him free to pursue his ambition in music. He now began to spend more time on music than on law, taking lessons from Nikolai Rimsky-Korsakov and others.
By 1905, Stravinsky had begun to take twice-a-week private lessons in orchestra from Rimsky-Korsakov. Soon, he started treatingthe elder musician as his second father and discussed his new compositions with him.
In 1906, when it was time to sit for his final law examination, Stravinsky was refused permissionbecause of low attendance. However, he was granted a half-course diploma. Subsequently, he began to concentrate on music. 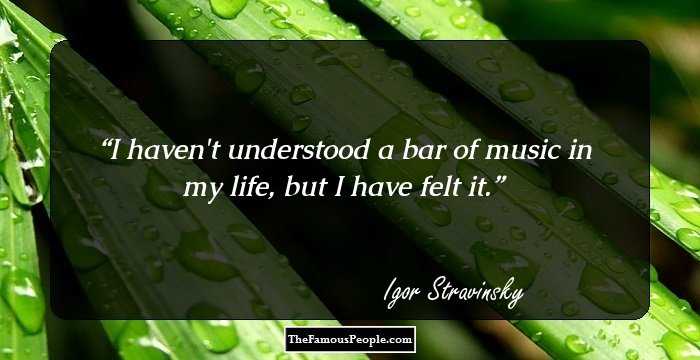 Quotes: Life, Music, I
Continue Reading Below
Career
Igor Stravinsky started his career under the mentorship of Rimsky-Korsakov, who used his influence to get him heard. He began by performing in the weekly gatherings of Rimsky-Korsakov’s class while he was still his student
His first major work, ‘Symphony in E-flat Major’, was composed sometime between 1905 and 1907. It was his first work for orchestra and also his first published piece. It was performed on April 27, 1907 by the St. Petersburg Court Orchestra along with ‘The Faun and Shepherdess’, another of his creations.
In July 1907, he started working on his second orchestral piece, ‘Scherzo fantastique.’Completed on 30 March 1908, it was his last major piece written while Rimsky-Korsakov was alive. In the same year, Stravinsky also wrote another short orchestral fantasy called ‘Feud'artifice’ as a wedding present to Rimsky-Korsakov’s daughter.
Both these pieceswere performed on 6 February 1909 at the Siloti Concerts, Petersburg. Sergei Diaghilev, whoat that time was planning to present a Russian opera in Paris, was present there. Realizing Stravinsky’s potential, Diaghilev commissioned him to compose a full-length ballet score, titled ‘The Firebird.
Subsequently, ‘Firebird’ was premiered by Diaghilev’s company, Ballets Russeson 25 June 1910 in Paris. It was a huge success and Stravinsky was not only hailed as a gifted composer, but he also became Diaghilev's star composer.
For the next four years, Igor Stravinsky spent the summers in Russia and the winters in Switzerland, working in close collaboration with Diaghilev. During this period, he composed quite a few masterpieces, including ‘Petrushka’ (1911) and ‘Le Sacre du printemps’ (The Rite of Spring, 1913).
Thereafter, he concentrated on completing a ballet he had started composing in 1908. Titled ‘Le Rossignol’ (The Nightangle), the work was commissioned by the Moscow Free Theatre for a fee of 10,000 roubles. However due to certain reasons it was premiered by Ballets Russes on 26 May 1914 in Paris.
Soon after that, with the First World War looming, Stravinsky made a quick trip to Russia to retrieve some of his personal belongings and was able to return to Switzerland just before the border closed down. He would not get the opportunity to visit his homeland for a long time to come.
Subsequently he settled down in Switzerland but his financial condition was very bad. He not only lost his income from his property in Russia (later USSR), but also had problem receiving royalties from his plays.
Continue Reading Below
Ultimately, Swiss philanthropist Werner Reinhart came to his aid. Under his patronage, Stravinsky continued producing pieces like ‘Renard’ (1916), ‘L'Histoire du soldat’ (1918) and ‘Pulcinella’ (1920).
In June 1920, Stravinskyshifted to France, where he lived until 1939. Initially, he received help from Leopold Stokowski but by 1924, he had earned enough to buy a villa at Nice. However, he lived mainly in Paris. This was also the period when he underwent a great change as a composer.
So far, his works were mostly based on Russian sources but now he started following neoclassical style of compositions. Important works of this period include the ‘Octet’ (1923), ‘The Concerto for Piano and Winds’ (1924) and ‘The Serenade in A’ (1925).
In 1934, Igor Stravinsky was conferred French citizenship. Sometime now, he formed a business and musical relationship with the French piano manufacturing company Pleyel and also forged professional relationships with many important people in the United States.
Sometime in 1939, he was asked to deliver the Charles Eliot Norton Lectures at Harvard University during the 1939-1940 session. Therefore, he left for New York on 1 September 1939 and eventually settled down in Hollywood.
Initially he found it hard to adjust in the new surrounding in the USA and mixed mainly with émigré friends from Russia. Gradually, he was drawn to the growing cultural life of Los Angelesand became friendly with many authors and composers, especially Aldous Huxley.
Concurrently, his professional life also began to bloom. Although he got into trouble in 1944 for rearranging America’s national anthem ‘The Star-Spangled Banner’ into an unconventional dominant seventh chord, he was soon out of it and in 1945 became a naturalized citizen of the country.
In 1962, he went back to USSR for a short visit on the invitation of its government. This was his first visit to his homeland since the WWI. Here he met leading composers of the time such as Dmitri Shostakovich and Aram Khachaturian.
During this last phase, he mainly used serial compositional techniques such as dodecaphony and the twelve-tone technique. Some of the major works of this period are ‘The Rake's Progress’ (1951), ‘Agon’ (1957) and ‘Requiem Canticles’ (1966) while ‘The Two Sketches of Sonata’ (1967) was his last original work.
Continue Reading Below 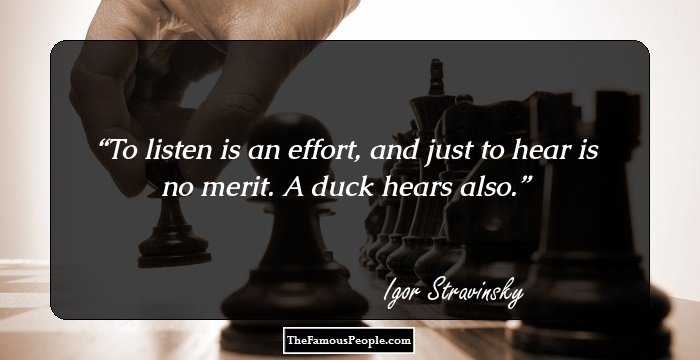 Major Works
Igor Stravinsky’s first major work was ’The Firebird.’ Premiered by the Ballets Russes on 25 June 1910 in Paris, the ballet not only earned the twenty-eight year old composer instant stardom, but also led to his collaboration with Diaghilev and paved the way for equallysuccessful productions like ‘Petrushka’, ‘The Rite of Spring’ and ‘Pulcinella.
The ‘Octet’, a chamber music composition completed in 1923, is another of his well known works. In this composition, Stravinsky used an unconventional combination of woodwind and brass instruments such as flute, clarinet in B and A, two bassoons, trumpet in C, trumpet in A, tenor trombone, and bass trombone.
Awards & Achievements
In 1962, Igor Stravinsky received three Grammy Awards: Best Classical Composition by Contemporary Composer, Best Classical Performance – Orchestra, and Best Classical Performance – Instrumental Soloist (with orchestra).
In 1987 he was posthumously awardedthe Grammy Lifetime Achievement Award.
Besides, he had received Royal Philharmonic Society Gold Medal in 1954, Léonie Sonning Music Prize in 1959 and Sibelius-prize in 1963. 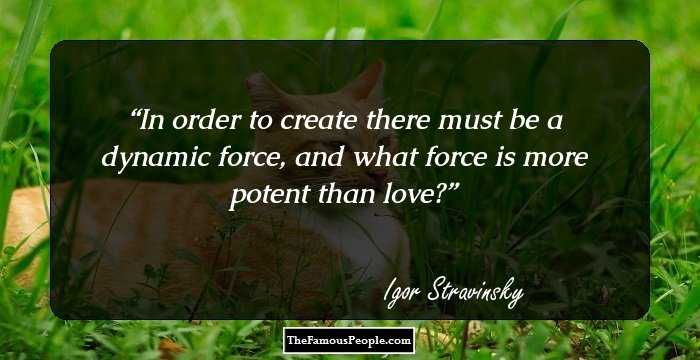 Quotes: Love
Personal Life & Legacy
On 23 January 1906,Igor Stravinsky married his cousin Yekaterina Gavrilovna Nosenko or Katya, in the face of great opposition from the Orthodox Church, to which Stravinsky belonged. They had four children, Fyodor (1907 and Ludmila (1908), Soulima (1910) and Marina Milena (1913). Soulima later grew up to become a composer.
In February 1921 while his wife was still alive, Stravinsky met Vera de Bosset, a Russian born American dancer, married to painter and stage designer Serge Sudeikin. The two developed a romantic relationship, as a result of which Vera left her husband.
Stravinsky continued leading a double life, dividing his time between Vera and his family until the death of his wife from tuberculosis in 1939. Finally, Stravinsky and Vera got married in Boston on March 9, 1940.
Initially, they lived in Hollywood but later in 1969, they moved to New York, where he died on April 6, 1971 from heart failure. His remains were later buried in San Michele Island, Venice.
Stravinsky has a star on the Hollywood Walk of Fame. In 2004, he was also inducted into the National Museum of Dance's Mr. & Mrs. Cornelius Vanderbilt Whitney Hall of Fame.