Advanced Search
Mike Pence is an American politician serving as the 48th vice president of the United States of America since 2017. Previously, he served as the 50th governor of Indiana from 2013 to 2017. A conservative and supporter of the Tea Party movement, he had previously represented Indiana's second and sixth congressional district in the ‘United States House of Representatives’ from 2001 to 2013. Born into a Catholic family with political leanings, he became interested in politics at an early age due to the influence of his family. As a young man, he idolized former President John F. Kennedy and was later inspired by Ronald Reagan. He went on to graduate from ‘Hanover College’ and earned his J.D. from ‘Indiana University School of Law,’ following which he began his career. He started a career as a radio talk show host in the 1990s, while trying to enter politics. After years of unsuccessful attempts, he was finally elected to the ‘U.S. House of Representatives’ in Indiana's second congressional district in 2000. Since then, his political career has been on the rise. American People
Vice Presidents
Political Leaders
American Men
Male Leaders
Childhood & Early Life
Mike Pence was born Michael Richard Pence on June 7, 1959, in Columbus, Indiana, USA, to Nancy Jane (née Cawley) and Edward J. Pence, Jr. His parents were Irish Catholic Democrats and he was raised in a politically inclined, religious household. His father was a U.S. Army veteran who operated several gas stations.
Mike graduated from ‘Columbus North High School’ in 1977. Growing up among a family with political leanings, he idolized former President John F. Kennedy. He volunteered for the ‘Bartholomew County Democratic Party’ during his school days.
He proceeded to earn a B.A. in history from ‘Hanover College’ in 1981, following which he studied law at the ‘Indiana University Robert H. McKinney School of Law,’ receiving his J.D. in 1986. 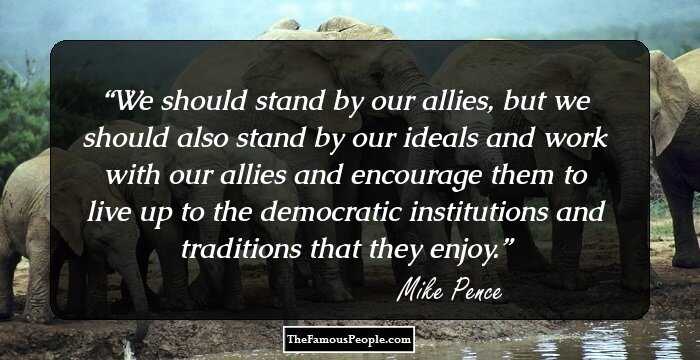 Quotes: Tradition
Continue Reading Below
Career
Mike Pence began his career as an attorney in private practice. Around this time, he also tried to enter politics and ran unsuccessfully for a congressional seat in 1988 and 1990. Refusing to give up, he became the president of the ‘Indiana Policy Review Foundation’ in 1991.
In 1992, he hosted the radio talk show ‘The Mike Pence Show’ which was aired on WRCR-FM in Rushville. Syndicated by Network Indiana, the show was aired on weekdays via 18 stations throughout the state from 1994. Starting from 1995, he also hosted a weekend political talk show.
He ended his broadcast career in the late-1990s and ran for Congress again in 2000, this time getting elected to the ‘U.S. House of Representatives’ in Indiana's second congressional district. Over the course of his political career, he was re-elected four more times by comfortable margins. Pence served as the chairman of the ‘Republican Study Committee,’ a group of conservative House Republicans, from 2005 to 2007.
His successful career prompted Pence to announce in 2011 that he would seek the Republican nomination for governor of Indiana in 2012. In November 2012, Pence won the gubernatorial election, defeating Democratic nominee John R. Gregg and Libertarian Rupert Boneham. He was sworn in as the 50th governor of Indiana on January 14, 2013.
As the governor, he gained much popularity for his tax reforms. He was successful in cutting state taxes, and also reduced the burden of income tax and eliminated the inheritance tax. He also implemented tax reforms aimed at strengthening the state’s competitive edge in attracting new investment and good-paying jobs for the residents of Indiana.
During his term, Indiana's job growth lagged slightly behind the national trend. In 2014, Indiana's economy was among the slowest-growing in the U.S., with 0.4% GDP growth, compared to the national average of 2.2%.
He worked with the ‘Indiana General Assembly’ to craft a balanced budget that would maintain strong reserves for the state and continue to generate a surplus. He also implemented steps to steer funds toward infrastructure improvements. His fiscal reforms helped Indiana maintain its AAA credit rating. By 2016, the state was enjoying a $2 billion budget surplus.
Pence decided to run for a second term as governor in the Indiana gubernatorial election in 2016. However, when Donald Trump selected Pence as his vice presidential running mate, Pence chose to end his gubernatorial campaign.
He was elected as the 48th vice president of the United States on November 8, 2016, and was sworn into the office on 20 January 2017. After taking charge, Pence traveled to South Korea, Japan, China, Indonesia, and Australia, engaging in talks related to peace and various other aspects.
Continue Reading Below
A staunch opponent of abortion, he cast the tie-breaking vote to advance the bill to defund the non-profit organization ‘Planned Parenthood.’ As of 2019, he cast 13 tie-breaking votes, seventh-highest in the Unites States history and more than his four predecessors’ votes combined.
Donald Trump, who expressed his interest to run for a second term during the 2020 US presidential elections, has announced that Mike Pence would once again be his running mate. 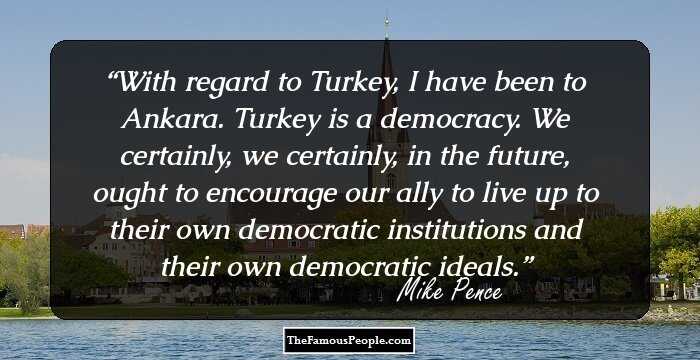 Major Works
As the governor of the State of Indiana, Mike Pence successfully achieved the largest state tax cut in Indiana history, while also lowering the business personal property tax and corporate income tax, and eliminating the inheritance tax. He also worked with the ‘Indiana General Assembly’ to craft a balanced budget that would maintain strong reserves for the state and continue to generate a surplus.
As the vice president of the Unites States, he proposed peace treaty between South Korea, China, and Japan and made strategies for the denuclearization of Korean Peninsula. On May 21, 2017, Pence was invited to the 'University of Notre Dame' where he delivered the commencement address. Though the president is the one who usually delivers the address, Pence was chosen instead of Trump in 2017 when the latter decided to speak at 'Liberty University.'
Awards & Achievements
‘The Tax Foundation’ honored him with the 2013 ‘Outstanding Achievement in State Tax Reform’ award.
In 2015, the ‘Indiana Hospital Association’ honored Mike Pence with ‘John C. Render Award’ for Health Policy. 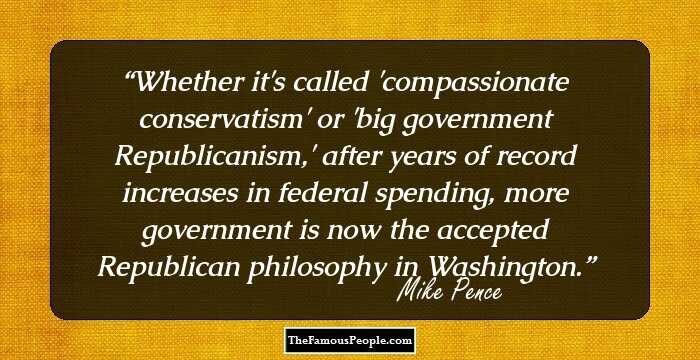 Personal Life & Legacy
Mike Pence married Karen in 1985. His wife is a former elementary school teacher who has also been involved in youth-related nonprofit organizations. The couple has three children.
Trivia
As the vice president of the United States, Pence has been heavily criticized for his much-publicized abandonment of an NFL game between ‘Indianapolis Colts’ and ‘San Francisco 49ers’ when the team members of ‘San Francisco 49ers’ knelt when the national anthem was being played.

See the events in life of Mike Pence in Chronological Order