Advanced Search
Mickey Rooney is the second longest serving actor in the history of cinema and is also among the most prolific ones. His tryst with acting started when he was just seventeen months old and appeared on stage with his parents. Encouraged by his mother, he managed to bag his first movie role at the age of six and started featuring regularly in films. He bagged a major contract with MGM in his early teens and soon achieved stardom with comic roles in numerous movies and musicals, becoming the undisputed box-office king. His acting career was interrupted by a stint in the war, where too he showed his comic abilities off the camera and entertained the troops. But his magic somehow disappeared after the war and his films did not reach the heights of his earlier ones. But he did not relent and took his talent to TV and stage, attaining a modicum of success there. In spite of not being the same force as he once was, he carried on acting with the same zeal and energy throughout his life and intermittently produced great performances, like in the film ‘The Black Stallion’. His personal life wasn’t short of action either and he married eight times. His longevity and endurance certainly suggests that Mickey Rooney was born to act and entertain. American Celebrities
New Yorkers Actors
Libra Actors
American Actors
American Film & Theater Personalities
Childhood & Early Life
Mickey Rooney was born as Joseph Yule, Jr. to Nellie and Joe Yule in Brooklyn, New York. Both his parents did vaudeville theatre and seventeen-month-old Mickey too appeared with his parents.
With his father busy travelling, Mickey moved to Kansas City with his mother, who made him audition for the series ‘Our Gang’. However, Mickey did not get the role. When he was three years old, his parents got divorced.
He began doing cameos in films and enrolled at ‘Hollywood Professional School’, where many other future film stars, such as Joseph A. Wapner Nanette Fabray, Judy Garland, Lana Turner, etc. also studied. 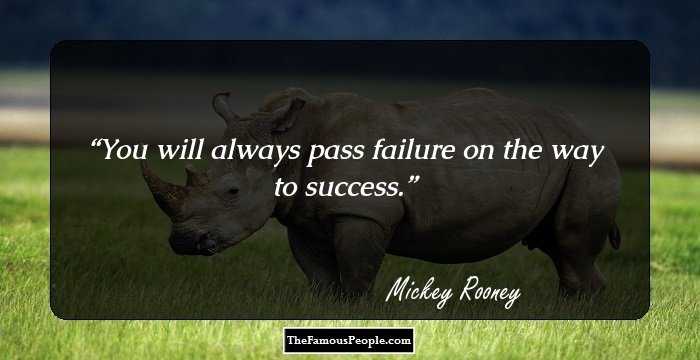 Quotes: You, Will
Continue Reading Below
Career
His first role was in the silent short film ‘Not to Be Trusted’ in 1926 where he played an adult midget. He then featured in a series of short films as ‘Mickey McGuire’.
At the age of twelve, his agent gave him the name ‘Mickey Rooney’. In 1934, Mickey was discovered by MGM producer David O. Selznick and was subsequently signed for the film ‘Manhattan Melodrama’. The film’s success led to a long-term contract and his admission in the MGM-owned ‘School for Professional Children’.
In 1937, he played the character of Andy Hardy as a supporting role in the film ‘A Family Affair’, which fetched him considerable fame. The unexpected success led to thirteen more Andy Hardy movies in the next decade. Rooney’s other notable films of this period were ‘Hoosier Schoolboy’, ‘Boys Town’ and ‘A Midsummer Night’s Dream’.
He starred in the successful musical ‘Babes in Arms’ with Judy Garland which led to several other musicals featuring the pair, including ‘Girl Crazy’ and ‘National Velvet’.
Rooney joined the army in 1944 and spent over twenty-one months there till the World War II ended. During this time, he entertained the troops and also featured on the ‘American Forces Network’ radio.
Post the war, Rooney lost his mojo at the box-office and starred in forgettable films like ‘Summer Holiday’, ‘Killer McCoy’ and ‘The Big Wheel’.
He began doing roles in TV shows and his first show was ‘The Mickey Rooney Show: Hey, Mulligan’, which was first aired in 1954. He also performed at nightclubs and kept doing smaller parts in films.
His notable movies of the 1960s include ‘Requiem for a Heavyweight, It's a Mad, Mad, Mad, Mad World’. In 1964, he started acting in another sitcom, ‘Mickey’ which also featured his son Tim Rooney. The series ended due to the suicide of a cast member, ‘Sammee Tong’.
Mickey had to wait a while for his next major success, which came in 1979 in Francis Ford Coppola’s film ‘The Black Stallion’. The same year, he acted in the successful play ‘Sugar Babies' with Ann Miller. He followed it up by an intense portrayal of a mentally challenged man in the TV movie ‘Bill’ and its sequel ‘Bill: On His Own’.
Continue Reading Below
In the 1990s, he got a starring role in the TV series ‘The Adventures of the Black Stallion’ in which he played the same character he had played in the film ‘The Black Stallion’ earlier. The series ran for three years and achieved worldwide popularity. He also acted in a Broadway play titled ‘Will Rogers Follies’.
Rooney continued performing even in his 90s, appearing most recently in the films ‘Night at the Museum’ and ‘The Muppets’. He also featured in a British pantomime, ‘Cinderella’ in 2007, where he played Baron Hardup. 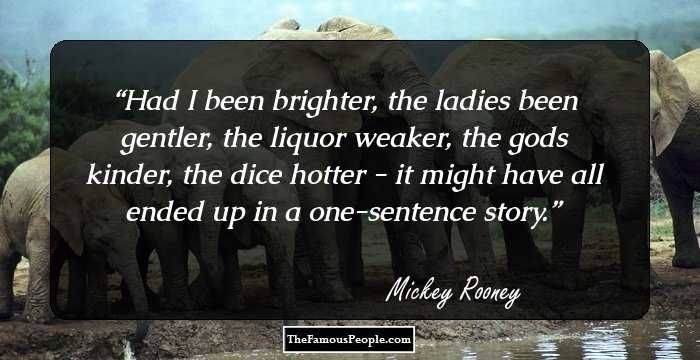 Quotes: I
Major Works
Rooney’s portrayal of the iconic character of Andy Hardy started off in a supporting role in the film ‘A Family Affair’. However, the character’s subsequent popularity resulted in almost twenty more films featuring Andy Hardy. These films also helped to make Rooney the number one box-office star.
He formed a very successful and much-loved pairing with actress Judy Garland in a series of successful musicals, such as ‘Babes in Arms’, ‘Strike up the Band’, ‘Babes on Broadway’ and ‘Girl Crazy’, which cemented his status as a top star at the time.
His portrayal of Henry Dailey, a retired horse jockey in the acclaimed film ‘The Black Stallion’ garnered much appreciation. The film was a success at the box office too, collecting over 37 million compared to its paltry budget of 2 million.
Awards & Achievements
He shared an ‘Academy Juvenile Award’ with Deanna Durbin in 1939 “for their significant contribution in bringing to the screen the spirit and personification of youth, and as juvenile players setting a high standard of ability and achievement”.
In 1964, he was awarded a ‘Golden Globe’ in the category ‘Best TV Star – Male’ for his role in ‘Mickey’.
He won a ‘Primetime Emmy’ in the category ‘Outstanding Lead Actor in a Limited Series or a Special’ for his role in the TV film ‘Bill’.
Continue Reading Below
He was honoured with an Academy Honorary Award in 1983 “in recognition of his 50 years of versatility in a variety of memorable film performances”. 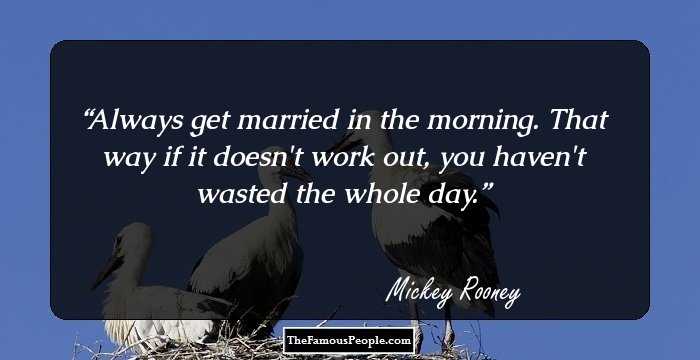 Quotes: You
Personal Life & Legacy
Rooney developed a very close friendship with Judy Garland, his co-star for many musicals and some films.
He jumped from one marriage to another with alarming frequency. In the 1940s itself, he married three women, beauty queen Ava Gardner, Betty Jane Rase, with whom he had two children Mickey and Tim. He also married Martha Vickers, with whom he had a son, Theodore.
In the 1950s too, he married twice, first marrying Elaine Devry and then Barbara Ann Thomason, with whom he had four children, Kelly, Kerry, Michael and Kimmy.
In the 1960s, he married Marge Lane and Carolyn Hockett, with whom he fathered a daughter Jonelle.
He married Jan Chamberlain in 1978, which has been his longest lasting marriage and the couple got separated after 35 years.
He was vocal about elder abuse and testified in court against his own Stepson Chris Aber in 2011.
He died in his sleep on April 6, 2014, at the age of 93.
Trivia
This prolific American actor worked in movies from 1926 to 2013, and his career spanning over eight decades is the second longest in the history of cinema. He has also featured in films in ten consecutive decades, from 1920s to 2010s.

See the events in life of Mickey Rooney in Chronological Order