Ava Lavinia Gardner was an famous actress who was among the leading heroines in Hollywood during the 1950s and 1960s. Considered to be one of the most beautiful women of her day, she rose to prominence with her portrayal of the glamorous beauty, Kitty Collins, in ‘The Killers’. Born into a large family, she lost her father at a young age. Growing up during the Great Depression, her poor family could barely manage to survive. Ava became an actress purely by chance—her brother-in-law, a photographer had taken a beautiful picture of hers which was sent to MGM studio. The dark haired beauty with the bewitching smile was called for an audition and soon found herself signing a contract with the famous studio. During her initial years she landed only small roles, however, her fortunes changed when she was chosen to play the femme fatale Kitty Collins in ‘The Killers’ which established her as a leading lady. Propelled by the success of the movie, she went to play substantial roles in high-profile films from 1950s onwards. The film ‘The Barefoot Contessa’ in which she starred with Humphrey Bogart is considered to be her signature film as she had a habit of going barefoot in real-life too.

American Celebrities
American Women
North Carolina Actresses
Capricorn Actresses
American Actresses
Childhood & Early Life
Ava was born into a rural farming community to poor parents Jonas Bailey Gardner and Mary Elizabeth. She was the youngest of seven children.
She grew up during the Great Depression amid rampant poverty. The death of her father when she was a teenager plunged the poverty stricken family into even greater despair. Her mother ran a boarding school for teachers, and in spite of all difficulties, insisted that Ava go to school.
She graduated from Rock Ridge high school in 1939 and attended secretarial classes at Atlantic Christian College for some time. 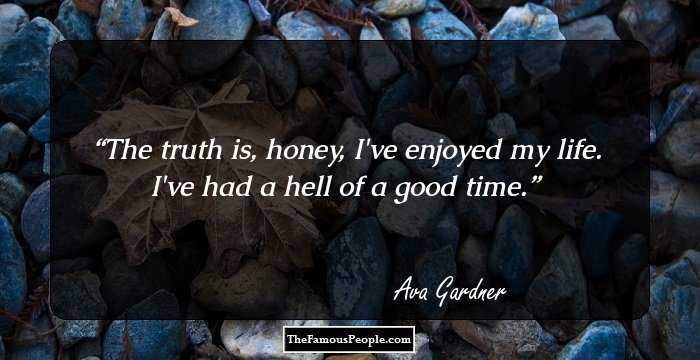 Quotes: Life, Time
Continue Reading Below
Career
Her sister’s husband, Larry Tarr, a professional photographer took pictures of the strikingly beautiful teenager which he sent to the MGM Studio. Impressed by her beauty, Al Altman, the head of MGM’s New York Talent Department called her for an interview and offered her a contract in 1941.
During her initial years she got only small roles in the MGM movies; she played up to 15 minor parts before her career actually took off. She was loaned to Universal Studios which cast her as the seductress Kitty Collins in the film noir, ‘The Killers’ in 1946. This was the breakthrough performance that got her acting skills noticed.
She was chosen to play the role of Julie Laverne in the musical ‘Show Boat’ in 1951. The film was a commercial success. It was followed by her appearances in ‘The Snows of Kilimanjaro’ (1952), ‘Lone Star’ (1952), and ‘Mogambo’ (1953).
In 1954, she appeared in what would become her signature film, ‘The Barefoot Contessa’ which revolved around the story of a fictional Spanish sex symbol, Maria Vargas. The movie also had Humphrey Bogart in the cast.
She acted along with Gregory Peck, Fred Astaire and Anthony Perkins in the post-apocalyptic drama film, ‘On the Beach’ in 1959. The story was set in the future, months after the World War III which had destroyed the complete northern hemisphere.
She was paired with Kirk Douglas in the political thriller, ‘Seven Days in May’ in 1964. The story was influenced by the right-wing anti-Communist political activities of General Edwin A. Walker after his resignation from the military.
She appeared in the film ‘The Night of the Iguana’ in 1964 which was based upon a Tennessee Williams play. The story revolved around an atheist clergyman, a gentle artist, and an aged poet.
During the 1970s she developed a penchant for disaster movies, and acted in quite a few of them: ‘Earthquake’ (1974), ‘The Cassandra Crossing’ (1976), and ‘City on Fire’ (1979). 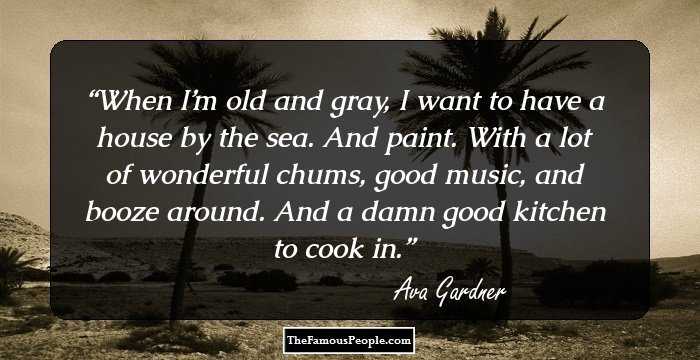 Quotes: Music, I
Major Works
She played the wisecracking Honey Bear Kelly in the 1953 film ‘Mogambo’ which also starred box-office hero Clark Gable and Grace Kelly. The movie was a remake of the classic ‘Red Dust’.
Her portrayal of Maxine Faulk in ‘The Night of the Iguana’ which was based on a play of the same name was much appreciated. The movie won several awards and she was nominated for a Golden Globe and a BAFTA as best actress.
Awards & Achievements
She received an Academy Award nomination for her portrayal of Honey Bear Kelly in the film ‘Mogambo’ in 1953. 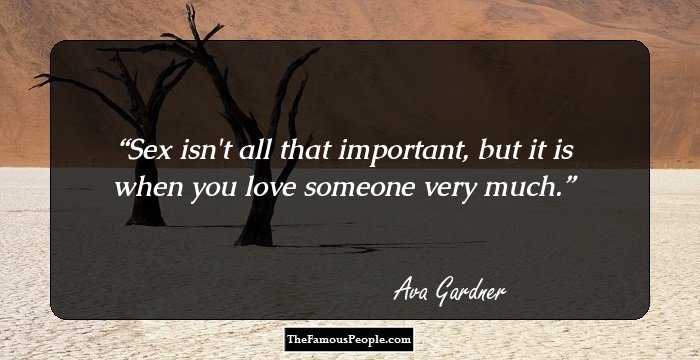 Quotes: You, Love
Personal Life & Legacy
She was briefly married to actor Mickey Rooney from 1942 to 1943. She did not fare much better in her second marriage as well—she wed jazz musician Artie Shaw in 1945 only to divorce him in 1946.
Her final marriage was to singer and actor Frank Sinatra whom she wed in 1951. Even though she claimed that Frank was the love of her life, even this marriage ended in divorce in 1957.
She was a lifelong smoker and suffered from several health complications because of this addiction. She died of pneumonia at the age of 67 in 1990.

Quotes By Ava Gardner | Quote Of The Day | Top 100 Quotes

See the events in life of Ava Gardner in Chronological Order 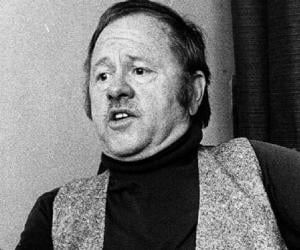