Grammy Award winning American hip hopper, actor and record producer, Clifford Smith, better known by his stage name Method Man is one of the most successful solo stars from the ‘Wu-Tang Clan’, an American hip hop group. He is one of the most emerging and charismatic figures in the field of rap music. As a child of separated parents, Method Man had to shuttle living with his mother in Staten Island and father in Long Island. His early years were far from rosy as he undertook many odd jobs to support himself and later got into drug peddling. It was his father who showed him the world of music and poetry. Ha later became a part of the ‘Wu-Tang Clan’, where he showcased his musical talents in their debut album, ‘Enter the Wu-Tang: 36 Chambers’. Soon his solo career took off to a great start with his debut studio album, ‘Tical’. Simultaneously working with several others artists in the hip hop and R&B genre, he also worked with Mary J Blige on the Grammy Award winning duet ‘I’ll Be There For You/You’re All I Need’. American People
Hip Hop Singers
Record Producers
Lyricists & Songwriters
American Men
Childhood & Early Life
Method Man was born on March 2, 1971 as Clifford Smith in Long Island, New York. Since his parents were living separately, he alternately lived with each of them all through his childhood.
His father was the one who introduced him to poetry and music. During his teenage years, life was not an easy path for him as he did many odd jobs to survive. He also got into petty drug dealing. 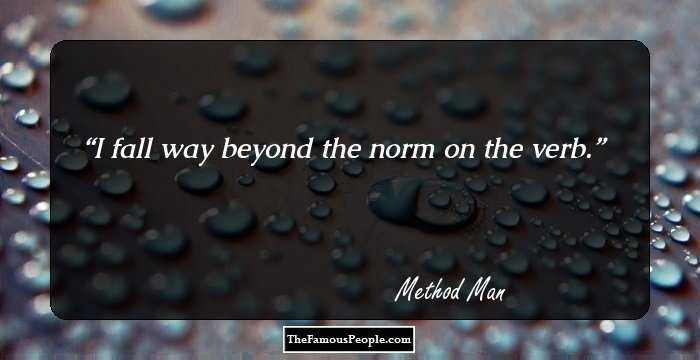 Quotes: I
Continue Reading Below
Career
He was a member of the ‘Wu-Tang Clan’, an American hip hop group, in which he was one of the most prominent members. He got a solo song in the group’s debut album, ‘Enter the Wu-Tang: 36 Chambers’, which released in 1993.
The ‘Wu-Tang Clan’s contract allowed its group members to release albums under any record label. Owing to this, he came out with his debut solo album ‘Tical’ in 1994, which was a commercial success.
On May 2, 1995, he came out with the Grammy Award winning duet, ‘I’ll Be There for You/You’re All I Need to Get By’. The song was sung along with R&B singer, Mary J. Blige.
On August 15, 1995, he collaborated with American rapper Redman for the cannabis smoking song, ‘How High’. The song was a hit and laid the foundation for their popular future collaborations.
In October 24, 1995, he created the single, ‘The Riddler’, from the ‘Batman Forever’ soundtrack. The song was released on the Atlantic Records label and made its way to four different Billboard charts.
In 1996, he performed along with B-Real, Busta Rhymes, Coolio and LL Cool J for the Space Jam soundtrack, ‘Hit ‘EmHigh’. That year, he was seen as himself in the film, ‘The Great White Hype’.
In 1997, he played the role of ‘Shondel’ in the crime drama film ‘Cop Land’, which was directed by James Mangold. The same year, he also appeared in the film, ‘One Eight Seven’.
On November 10, 1998, he released his second studio album, ‘Tical 2000: Judgement Day’. The album received good reviews from music critics. That year, he was also seen in the Hype Williams film, ‘Belly’.
In 1999, he collaborated with American rapper Redman for the album titled, ‘Blackout!’ This hip hop album was a success and it peaked on the music charts. He also acted in the films, ‘Black and White’ and ‘Big Daddy’.
Continue Reading Below
In 2000, he appeared as himself in the documentary film, ‘Backstage’. Over the next few years, he was seen in the films like ‘How High’, ‘Brown Sugar’, ‘The Wire’, and ‘Volcano High’.
On May 18, 2004, he released his third studio album titled, ‘Tical 0: The Prequel’, which received mixed reviews. In the same year, he played various roles in the movies, ‘Scary Movie 3’, ‘My Baby’s Daddy’, ‘Garden State’ and ‘Soul Plane’.
In 2005, he played the role of ‘Deputy Turner’ in the film, ‘Venom’, which was directed by Jim Gillespie. The film was released just weeks after the Hurricane Katrina and received positive reviews.
On August 29, 2006, he released his fourth studio album, ‘4:21 ...The Day After’. The album received positive reviews and also did well on the music charts.
From 2006 and 2007, he starred in two episodes, ‘Poppin’ Tags’ and ‘Big Shots’ of the American television crime drama series, ‘CSI: Crime Scene Investigation’
In 2008, he played the role of ‘Persian Emissary’ in the parody film, ‘Meet the Spartans’, which was directed Jason Friedberg and Aaron Seltzer. The film reached the number one position at the box office but was negatively reviewed.
On May 19, 2009, he came out with the collaborative album with Redman titled, ‘Blackout! 2’.The album was released under the Def Jam label and received positive reviews.
On March 30, 2010, he released the album, ‘Wu-Massacre’, in collaboration with Wu Tang Clan members Ghostface Killah and Raekwon. The album did well on the music charts.
In June 30, 2010, he was seen in the action-thriller film ‘Sinners and Saints’, which was directed by William Kaufman. That year he was also seen in the films, ‘The Mortician 3-D’, ‘The Good Guys’ and the television series, ‘CSI: Crime Scene Investigation’.
In 2011, he played the role of ‘Jacolby’ in the David Gordon Green comedy film, ‘The Sitter’. The same year, he also played himself in the film, ‘The Indestructible Jimmy Brown’
In 2012, he was seen as ‘Sticks’ in the American war film titled, ‘Red Tails’. The film was directed by Anthony Hemingway and received mixed reviews from film critics.
Major Works
In 2012, his duet, ‘I’ll Be There for You/You’re All I Need to Get By’ was ranked as the number one song on the ‘Complex’ magazine’s list of ‘The 25 Best Hip-Hop Love Songs’. It reached the number one spot on the R&B singles chart, in the year of its release.
Awards & Achievements
In 1996, he received a Grammy Award for the category of ‘Best Rap Performance By A Duo Or Group’ for ‘I’ll Be There for You/You’re All I Need to Get By’.
Personal Life & Legacy
He got married in 2001 and has fathered three children from the relationship.
In 2003, he condemned the management of the‘Wu-Tang Clan’, particularly ‘Oli Power Grant and Mitchell Divine’. He was also unhappy with the launch of a clothing line by the group.
Trivia
This Grammy Award winning American rapper is a member of the Wu Tang Clan and is known to the world not by his baptized name but his stage name. He released his first debut album, ‘Tical’ in 1994.

See the events in life of Method Man in Chronological Order