(Regarded As One of the Greatest Rappers of All Time)

Kendrick Lamar is an American rapper and lyricist. He is a critically and commercially acclaimed artist who started his musical journey as a teenager. He began his career in music by recording mix tapes under the pseudonym K-Dot. His first musical contract was signed at the age of sixteen with record label Top Dawg Entertainment. He later went on to form a hip hop group and released his albums and singles along with actively taking part in stage shows and tours. As part of his career, he has been associated with artists like Jay Rock, Snoop Dogg, Dr.Dre, Game, Taylor Swift, and Rihanna. Kendrick Lamar has received approximately 135 award nominations of which he has won close to 45 awards. Among the prestigious awards that he has won include seven Grammy Awards, The BET Awards, Teen Choice Awards, MTV Awards, MOBO Awards, Soul Train Awards, People’s Choice Awards, Webby Awards and Youtube Music Awards. He has been named ‘The New King of the West Coast’ by Dr.Dre, Snoop Dogg and Game. Time magazine also listed him among the 100 most influential people in the world in 2016. American People
Hip Hop Singers
American Men
Male Singers
Male Rappers
Childhood & Early Life
Kendrick Lamar Duckworth was born on 17 June 1987, in Compton, California. He was named by his mother in honour of singer and songwriter Eddie Kendricks.
He completed his preliminary education from the McNair Elementary in Compton Unified School District. Later, he attended the Centennial High School in Compton. Kendrick Lamar was known to be a bright student and consistently got A grades. 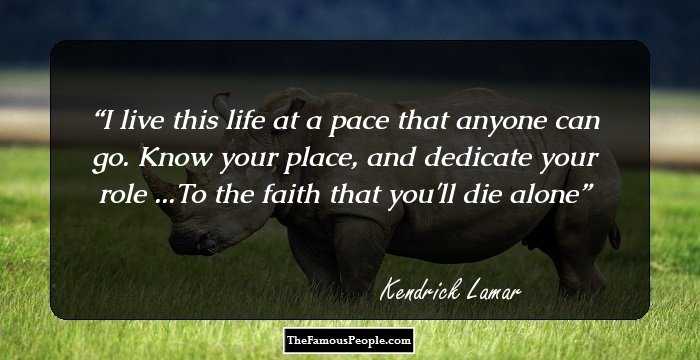 Quotes: Life, Alone, I
Continue Reading Below
Career
In 2004, at the age of 16, Kendrick Lamar released his debut project; a mixtape titled ‘Youngest Head Nigga in Charge’, under the pseudonym K-Dot. The album earned him appreciation in the locality as well as a contract with record label Top Dawg Entertainment. He began work with the label and in 2005 released the album ‘Training day’, a mixtape of 26 song recordings.
Between 2006 and 2007, he worked alongside rappers like Jay Rock and Ya Boy. He was featured by his pseudonym in rapper The Games’ songs ‘The Cypha’ and ‘Cali Niggaz’. 8He featured in Jay Rock’s single ‘All My Life (In the Ghetto)’ in 2008, which was supported by Warner Bros. Records.
In 2009, he released his next mixtape ‘C4’, which was featured on Wayne’s ‘The carter III LP’. Around this time he began using his original name and stopped using his pseudonym at work. Later that year he released ‘The Kendrick Lamar EP (Extended Play)’.
In 2009, he also formed a hip hop group ‘Black Hippy’ with Jay Rock, Schoolboy Q and Ab-Soul. In a majority of instances, each team member appeared in the others videos and tapes.
In 2010, he released his first mixtape ‘Overly Dedicated’ as Kendrick Lamar and the album made an entry to the Billboard's R&B/Hip-Hop Albums chart that year.
In 2011, he released his first official album titled ‘Section.80’ digitally, and the album went on to gain the 13th position at the Billboard 200.
It was in this period that he gained much popularity with guest appearances and album releases. In 2011, during a concert he was named ‘The New King of the West Coast’ by Game, Snoop Dogg and Dr. Dre. In 2011, he partnered with Windows Phone and created an original song titled ‘Cloud 10’
In 2011, he released two albums, ‘Good Kid’ and ‘M.A.A.D City’. His albums earned much appreciation and were nominated for the prestigious Grammy Awards that year.
He remained active with tours between 2013 and 2014. He also made guest appearances in albums of artists like YG, Tame Impala and SZA. In 2014 he released a single ‘I’ from his album ‘To Pimp a Butterfly’. The album was released the following year to highly positive reviews.
Continue Reading Below
In 2015, he featured in Taylor Swift’s official remix version of ‘Bad Blood’ as well as video too. The song went on to top the Billboard Hot 100. In 2016, he released a compilation album of unfinished demos, titled ‘Untitled Unmastered’.
In 2017 he released a promotional single ‘The Heart Part 4’. The following week he released the lead single ‘Humble’ along with its video. In April 2007, he released his next album titled ‘Album’ with guest appearances by U2, Rihanna and Zacari. Along with being certified as Platinum by the Recording Industry Association of America, the album released as number one in the Billboard 200 chart. 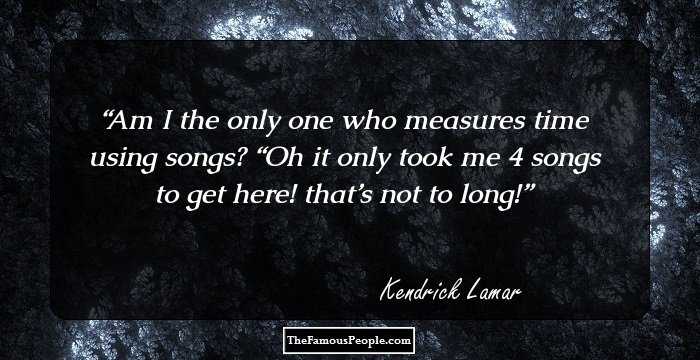 Quotes: Me, Time, I
Major Works
Kendrick Lamar is an acclaimed rapper and lyricist. He has several award winning albums to his credit like ‘Studio.80’, “Good kid, “M.A.A.D city’, ‘To Pimp a Butterfly’ and ‘Damn’.
Awards & Achievements
Kendrick Lamar received the BET Hip Hop Award in the ‘Lyricist of the Year’ category in 2012 and 2013.
In 2013, he won the Vanguard Award at the ASCAP Rhythm & Soul Music Awards; BET Award in two categories - ‘Best New Artist’ and ‘Best Male Hip-Hop Artist’.
In 2013, he also won the Soul Train Music Awards for ‘Album of the Year’ for Good Kid, m.A.A.D City.
In 2014 and 2015, he was chosen the ‘Best Male Hip-Hop Artist’ at the BET Awards. In 2014 he won the BET Hip Hop Awards for several categories, such as Album of the Year and Lyricist of the Year
In 2015, he won the Grammy Awards for ‘Best Rap Song’ and ‘Best Rap Performance’ for ‘I’.
In 2016, he received the Grammy Award for ‘Best Rap Performance’ and ‘Best Rap Song’ for “Alright”. He was also the recipient of the Grammy Award for ‘Best Rap/Sung Collaboration’ for ‘These Walls’ (with Bilal, Anna Wise and Thundercat).
In 2015, he received the Grammy award for ‘Best Music Video’ for ‘Bad Blood’ (with Taylor Swift). His album ‘To Pimp a Butterfly’ won the ‘Album of the Year’ at the Grammys in 2016.
He has been nominated for the Grammy Awards in several categories in 2017 as well. 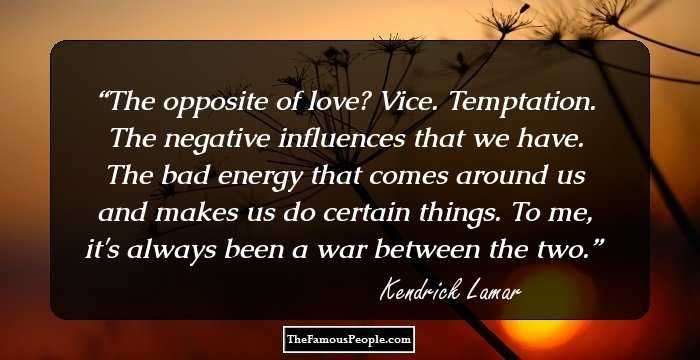 Quotes: Me, Love, War
Personal Life & Legacy
He is a Christian by faith and discusses the same in his songs as well.
In 2015, he got engaged to longtime girlfriend Whitney Alford.
Trivia
NBA player, Nick Young, is Kendrick Lamar’s cousin brother.

Quotes By Kendrick Lamar | Quote Of The Day | Top 100 Quotes

See the events in life of Kendrick Lamar in Chronological Order