Melissa Lou Etheridge is an American rock singer-songwriter, guitarist, and a gay and lesbian activist. Born to John Etheridge and Elizabeth Williamson, she grew up in Leavenworth, Kansas. She began playing the guitar at the age of eight. After graduating from high school, she attended Berklee College of Music in Boston. She performed in lesbian bars around Los Angeles, and caught the attention of Island Records chief Chris Blackwell. The following years saw her bring out a line of albums and hit singles. She has won two Grammy awards from fifteen nominations. Her first album, “Melissa Etheridge” contained the single, “Bring Me Some Water” which earned a Grammy nomination for Best Rock Vocal Performance, Female as did “Brave and Crazy”. She received her first Grammy for Best Rock Vocal Performance, Female for her single “Ain’t It Heavy” from her album “Never Enough”. The album “Yes I Am” spawned the hits “Come to My Window” which earned her a second Grammy for Best Rock Vocal Performance, Female, and “I’m the Only One”, nominated for Best Rock Song. “Your Little Secret” was moderately successful. Her album “Breakdown” was nominated for a Grammy Award for Best Rock Album. Her other albums are “Skin”, “Lucky”, “Fearless Love”, and the most recent “4th Street Feeling”. American People
Lyricists & Songwriters
American Women
Kansas Musicians
Berklee College Of Music
Childhood & Early Life
Melissa Lou Etheridge was born on May 29, 1961 to John Etheridge, a psychology teacher at Leavenworth High School, and Elizabeth Williamson, a computer consultant. She had a sister elder to her.
She attended David Brewer School, in Leavenworth, Kansas. She graduated from Leavenworth High School in 1979. She was a member of the first “Power and Life” musical/dance group at high school.
She began playing the guitar at the age of eight, and through her teenage years, played in all-men country music groups. She then moved to Boston to attend Berklee College of Music. 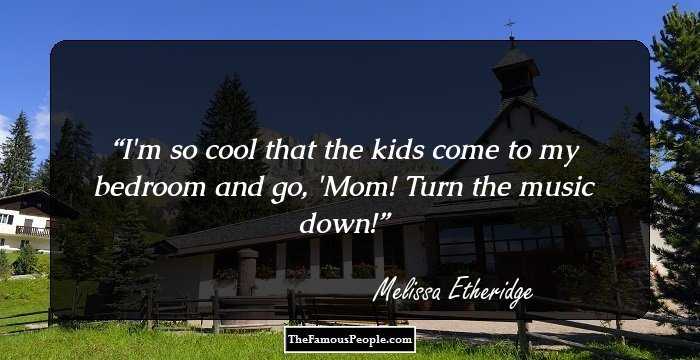 The Best Black Actresses Of All Time
Career & Later Life
Etheridge performed in lesbian bars around Los Angeles, and was discovered by Island Records chief Chris Blackwell. In 1986, she received a publishing deal to write songs for movies including the movie “Weeds”.
After initial rejections, her self-titled debut album “Melissa Etheridge” was completed in just four days. Her single, “Bring Me Some Water”, was nominated for a Grammy in 1989 for Best Rock Vocal Performance, Female.
She provided background vocals to Don Henley’s “The End of the Innocence”. Her second album “Brave and Crazy”, released in 1989, won a Grammy nomination for Best Rock Vocal Performance, Female.
In 1992, Etheridge established a performing arts scholarship at Leavenworth High School in honor of her father who used to drive her around so she could play in bands.
The success of 1993’s “Yes I Am” improved sales of her previous albums. The album “Melissa Etheridge” earned a RIAA certification of 2× Platinum while “Never Enough” earned a RIAA certification of Platinum.
Her 1995 album “Your Little Secret” was moderately successful. The album produced two Top 40 singles “I Want to Come Over” and “Nowhere to Go”, and earned a RIAA certification of 2× Platinum.
The album “Skin”, dubbed by critics as portrayal of her breakup with partner Julie Cypher, was released in 2001. The single “I Want to Be in Love” was nominated for Best Rock Vocal Performance, Female.
Her eighth album “Lucky” was release in 2004. Though the album did not sell well like “Skin”, it garnered a Grammy nomination for her cover of Greenwheel’s “Breathe” for Best Rock Vocal Performance, Solo.
In October 2004, Etheridge was diagnosed with breast cancer. Though bald from chemotherapy, she performed a tribute to Janis Joplin with the song “Piece of My Heart” at the following year’s Grammy Awards.
Continue Reading Below
Etheridge performed “Imagine That” and “What Happens Tomorrow” from her tenth album “The Awakening”, released in 2007, and “I Need To Wake Up” at the Giants Stadium on the American leg of Live Earth.
In 2010, she debuted her tenth studio album “Fearless Love” produced by John Shanks. She performed her title track “Fearless Love” and “Come to My Window” on “Dancing With the Stars” on ABC.
The biographical album “4th Street Feeling” was released in 2012. The title referred to her hometown's main road. Her upbringing is referred to in many tracks.
Etheridge performed her new song “Uprising of Love” along with a rendition of John Lennon’s “Imagine” in the 2014 New Year’s Eve celebration in New York City’s Times Square.
Major Works
In 1993, she released her album “Yes I Am”. Co-produced with Hugh Padgham, it spent 138 weeks on Billboard 200 charts, and spawned the hits “Come to My Window” and “I’m the Only One”.
The album “Breakdown” was released in October 1999. It peaked at 12 on the Billboard charts, and spent 18 weeks in the charts. It was nominated for a Grammy Award for Best Rock Album.
Her single “Angels Would Fall” won two Grammy nominations: Best Rock Vocal Performance, Female and Best Rock Song in 2000. A year later, “Enough of Me” was nominated for Best Rock Vocal Performance, Female.
Awards & Achievements
In 1992, Etheridge released her third album “Never Enough”. The album did not do well. However, she received her first Grammy for Best Rock Vocal Performance, Female for her single “Ain’t It Heavy”.
Etheridge earned her second Grammy for Best Rock Vocal Performance, Female for her single “Come to My Window”. “I’m the Only One” and “Come to My Window” were nominated for Best Rock Song.
Her song “I Need to Wake Up” for the film documentary “An Inconvenient Truth”, won the Academy Award for Best Original Song in 2006. It was released on her album, “The Road Less Traveled”.
Family, Personal Life & Legacy
Etheridge was in a relationship with Julie Cypher for a long time. During this period Cypher got pregnant via artificial insemination, using sperms donated by David Crosby, and gave birth to two children, Bailey Jean and Beckett. In September 2000, Etheridge and Cypher announced their separation.
From 2002 to 2010, Etheridge had a partnership with Tammy Lynn Michaels, and had a commitment ceremony. They had twins via an anonymous sperm donor. In 2010 they announced that they had separated.
In 2013, she said that she planned to get married to her partner Linda Wallen and they got married on May 31, 2014, in San Ysidro Ranch in Montecito, California.
On May 13, 2020, Melissa Etheridge announced about the death of her son Beckett Cypher. He was 21 and had died of illness related to opioid addiction.
Trivia
This singer was diagnosed with breast cancer in 2004. She appeared and performed at the 2005 Grammy Awards although bald from chemotherapy. Her performance was lauded in song in India.Arie’s “I Am Not My Hair”.

See the events in life of Melissa Etheridge in Chronological Order