Advanced Search
Gerard Way is an American rock/punk singer-songwriter, band member, musician, and comic book writer/director. He founded the band ‘My Chemical Romance’ in 2001, which had its fair share of stardom until its disbandment in 2013. Like most children, Way was fond of comic books as a child. Fulfilling his passion, he created his own dark-humored mini-comic series titled ‘The True Lives of the Fabulous Killjoys.’ He then released his comic book ‘The Umbrella Academy’ in 2007. Way went on to release his debut solo album in 2014 and named it ‘Hesitant Alien.’ It topped the ‘UK Rock Albums’ chart. Gerard is also known for his association with the boy band ‘The Hormones.’ He is the band’s lead vocalist and works alongside guitarists Ian Fowles and Matt Gorney, drummer Jarrod Alexander, and pianist James Dewees. Gerard Way had a tough childhood which resulted in his teenage years being spent in isolation, depression, and alcoholism. His only source of inspiration was his grandmother who taught him both music and art. With sheer perseverance and determination, he overcame his struggles and went on to become a pioneer of punk music, making it an important genre in mainstream music. Taylor Swift
9th April In History
DID WE MISS SOMEONE?
CLICK HERE AND TELL US
WE'LL MAKE SURE
THEY'RE HERE A.S.A.P
Quick Facts 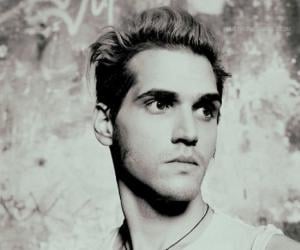 American People
Rock Singers
Lyricists & Songwriters
American Men
New Jersey Musicians
Childhood & Early Life
Gerard Arthur Way was born on 9 April 1977, in Summit, New Jersey, USA, to Donna and Donald Way. He is of Scottish and Italian descent. He was raised in Belleville, New Jersey along with his younger brother Mikey Way.
He grew up under the guidance of his grandmother Elena Lee Rush. She taught him to paint, sing, and perform. He was in elementary school when he first performed in a school musical where he played the role of ‘Peter Pan.’
After listening to the influential Bon Jovi, Way decided to become a performer. He began immersing himself in music and drawing. While other kids of his age took to partying, Way kept to himself.
High school was his roughest phase as not many understood him. His only companion was his brother. He became an alcoholic and got into trouble with the cops too.
At the age of 16, he began writing comic strips on a fictional serial killer named Jeffrey Dahmer. Upon graduating from ‘Belleville High School’ in 1995, he decided to attend ‘The School of Visual Arts’ in New York and pursue a career in the comic industry.
He graduated with a ‘Bachelor of Fine Arts’ degree in 1999 and was selected as an intern at ‘Cartoon Network,’ followed by a job wherein he made toy designs and created animations. 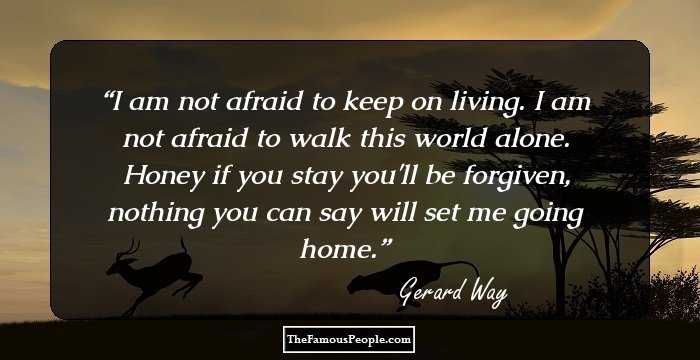 Quotes: You, Me, Alone, Home, Will, Living, I
Continue Reading Below
My Chemical Romance & Comic Book Writer
After landing a job with ‘Cartoon Network’ everything seemed to go well for Way. He and Joe Boyle created a cartoon called ‘The Breakfast Monkey’ and pitched it to the Network. But the project was declined, owing to its similarities with the existing ‘Aqua Teen Hunger Force.’
After the September 11, 2001 attack, his life changed forever. The incident stirred a desire to make a difference and reach out to people. Hence, Way took to music to attain his goal.
In 2001, he began writing the song ‘Skylines and Turnstiles,’ projecting people’s emotional battle after the attack. It became the first song of his self-formed band ‘My Chemical Romance.’
Gerard roped in guitarists Ray Toro, Frank Iero, and his brother Mikey Way. He also got pianist James Dewees to join the band. Eventually, the band found success and started working on their debut album.
The following year, the band released their debut studio album titled ‘I Brought You My Bullets, You Brought Me Your Love.’ The album was certified gold by BPI as it sold more than 100,000 units.
In 2004, a second studio album titled ‘Three Cheers for Sweet Revenge’ was released. It peaked at number 28 on the ‘US Billboard 200’ and was rated platinum by RIAA and ‘Music Canada.’ They reprised their success with another album in 2006 titled ‘The Black Parade.’
Around the same time, Way worked with many other bands, such as ‘Every Time I Die’ and ‘Head Automatica,’ featuring in their songs ‘Kill the Music’ and ‘Graduation Day,’ respectively.
By 2007, his love for creating comic strips rekindled and he began working on the comic book ‘The Umbrella Academy’ which released on 19th September 2007 and became a best-seller. 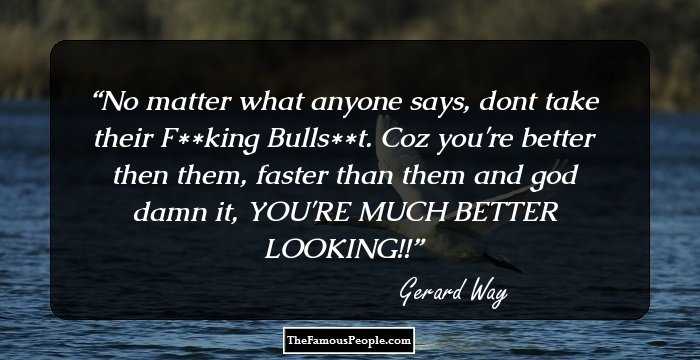 Quotes: God
Continue Reading Below
Second Comic Book & Edge of Spider-Verse
After the success of his first comic book, he began working with Shaun Simon in 2009 and co-created a comic series called ‘The True Lives of the Fabulous Killjoys.’
In 2012, Way announced at the ‘New York Comic Con’ that readers would get a peek into the series on its ‘Free Comic Book Day’ release in 2013. In 2014, he and Gabriel Ba began working on the sequels of ‘The Umbrella Academy.’
In an interview, he stated that the upcoming parts of his comic book would be more detailed. He also stated that he would release two volumes, one after another, with a few flashback copies in-between.
Simultaneously, he began working on a comic series titled ‘All Ages’ based on cats. In 2014, he signed a deal with ‘Marvel Universe’ for a comic series titled ‘Edge of Spider-Verse’ that developed an alternate universe for Spider Man.
He made his directorial debut, co-writing and co-directing the season two finale episode of ‘The Aquabats! Super Show!’ It earned a ‘Daytime Emmy Award’ nomination for ‘Outstanding Writing in a Children’s Series.’
My Chemical Romance Split & Solo Album
After the band ‘My Chemical Romance’ split, Way signed a deal with ‘Warner Bros Records’ as a solo artist. He began working on an album in 2013. In June 2014, a single titled ‘Action Cat’ was aired on the radio as a promotional song for his upcoming album.
He embarked on several shows to promote his solo studio album. He first performed at the ‘Reading and Leeds Festival’ 2014 and later made an appearance at ‘Wedgewood Rooms.’
On 19th August 2014, a music video of the song ‘No Shows’ was released as the first single of his album ‘Hesitant Alien.’ The album hit the music stores on 29th September 2014.
In order to promote his album, he formed the band ‘The Hormones’ that toured with him in February and March 2015. They also performed as a team at the ‘Australian 2015 Soundwave Music Festival.’
Continue Reading Below
In 2015, he co-wrote and provided vocals for Andy Black’s song ‘Louder Than Your Love.’ In 2016, two tracks namely ‘Don’t Try’ and ‘Pinkish’ were added to his album.
After a brief break, Way released a series of singles in 2018. These singles include ‘Baby You’re a Haunted House,’ ‘Getting down the Germs,’ and ‘Dasher.’
In 2019, he released the covers of ‘Hazy Shade of Winter’ by ‘Simon & Garfunkel’ and ‘Happy Together’ by ‘The Turtles.’ 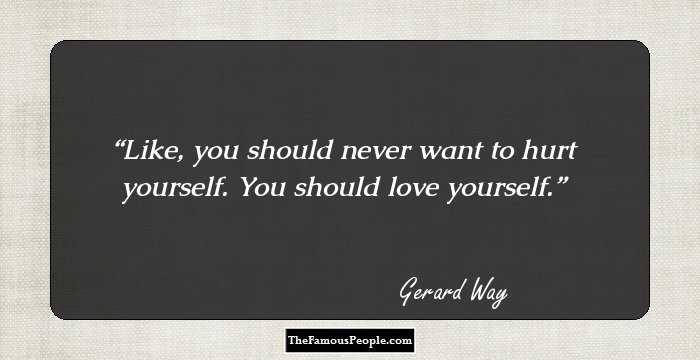 Quotes: You, Love, Never, Yourself, Like
Major Works
‘Hesitant Alien’ is the first solo studio album of Gerard Way. The album topped the ‘UK Rock Albums’ and ‘US Alternative Albums’ charts. It also peaked at number 16 on the ‘US Billboard 200.’
His comic book ‘The Umbrella Academy’ received critical appreciation. The book’s first six issues were titled ‘The Umbrella Academy: Apocalypse Suite’ and were published by ‘Dark Horse Comics.’ It went on to win the ‘Eisner Award.’
Awards & Achievements
In 2005, Gerard Way and his band ‘The Chemical Romance’ took home the ‘Best New Artist-International’ award. In 2006, he received the ‘Best Rock Artist- International’ award at the ‘Los Premios MTV Latinoamerica.’
In 2007, the band received the ‘Best Rock Video’ for ‘Welcome to the Black Parade’ at the ‘MTV Video Music Awards Japan.’ It also earned the ‘People’s Choice: Favorite International Group’ award at the ‘MuchMusic Video Awards.’
In 2007, they took home the ‘Best International Band’ award at the ‘NME Awards.’ In 2011, they won two ‘NME Awards’ under the ‘Best International Band’ and ‘Best Video’ categories for the song ‘Na Na Na.’
Personal Life
Gerard Way married Lyn-Z, musician and bassist of the popular electropunk band ‘Mindless Self Indulgence,’ on 3rd September 2007. He married her backstage at the ‘Projekt Revolution’ tour, with a member of the ‘Live Nation’s’ touring staff officiating as the minister.
On 27th May 2009, the couple welcomed their daughter Bandit Lee Way. He currently lives with his wife and daughter in Los Angeles, California.
Trivia
Way designed and drew the covers of ‘My Chemical Romance’s’ first and second album.

See the events in life of Gerard Way in Chronological Order