Mary Harris ‘Mother’ Jones was a courageous fighter for the rights of the workers and organizer of workers’ strikes in the first two decades of the 20th century. She was an inspiring figure for the distressed strikers and used to clad herself in typical black Victorian dresses, which made her look older than she actually. She used to refer to the striking miners as ‘her boys’, which is why she gained popularity as ‘Mother Jones’. For her great ability to bring people together and motivate them to fight for their rights, she was once called by a U.S. district attorney as ‘the most dangerous woman in America’. Jones was born in Ireland but migrated to Canada after the Irish famine ruined her family’s farms. After she faced personal tragedies like: losing her husband and children to yellow fever and losing her possessions in the Great Chicago Fire, she dedicated her life to fight for the cause of better working conditions for laborers and abolition of child labor. She was the organizer of the famous ‘Children’s Crusade’ in which she marched, with child laborers, from Philadelphia to New York to meet President Roosevelt and discuss the evils of child labor. She faced prison a few times in her life and died at the age of around 93 in Maryland. Ralph Nader
DID WE MISS SOMEONE?
CLICK HERE AND TELL US
WE'LL MAKE SURE
THEY'RE HERE A.S.A.P
Quick Facts

American Celebrities
American Women
Women Activists
Women Educators
American Activists
Childhood & Early Life
Mother Jones was born as Mary Harris in Cork County, Ireland, to Ellen and Richard Harris. Her father was a farmer and the whole family migrated to Canada during her adolescence to escape the Irish famine of that time.
She spent her formative years studying in Toronto and then moved to Chicago to become a dressmaker. She got married and lived in Memphis with her family there. But in the yellow fever epidemic of 1867, she lost all her family. 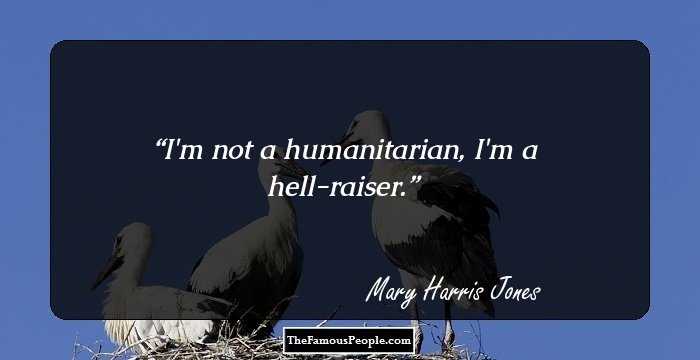 Continue Reading Below
Career
After losing her family to yellow fever epidemic, Jones returned back to Chicago to her dressmaking business. But within next 4 years, she lost all her hard earned money, possessions and house to the Great Chicago Fire in 1871.
After practically losing everything, she devoted her life to bigger causes. She supported the labor movement and became a part of the ‘Knights of Labor’ and gave inspiring speeches to the striking workers.
From 1873-1877, Jones actively supported laborers in achieving their demands. She used to travel to various strike sites and instill more passion into their strikes. She helped the coal miners’ strike in Pennsylvania and railroad workers.
After the Haymarket Riot of 1886, ‘Knights of Labor’ started to breakdown and Jones became associated with the ‘United Mine Workers’. During her ‘United Mine Workers’ days, she encouraged strikers to face the militias and strike-breakers with courage.
By 1887, she was called ‘Mother Jones’ by everyone, for her mother like image. She was around 60 years old by this time and worked vigorously to help male workers achieve their motives and encouraged the women to stay at home to look after the children.
Female workers in Pennsylvania’s silk mills went on strike in 1901 and Jones was summoned to organize them into systematic strikers. After striking for a long time, demanding to be paid adult wages, the workers came to a settlement with the mill owners.
In 1902, at her trial in West Virginia court for ignoring an order to ban the meetings by striking miners, the district attorney addressed her as ‘the most dangerous women in America’, for she was a great influence on the workers all over.
Jones was against child labor and fought against it all her life. In 1903, she organized ‘Children’s Crusade’, a march from Philadelphia to New York, consisting of child laborers, with banners demanding ‘We want to go to School and not the mine!’
In 1912, Jones became a part of the ‘Paint Creek-Cabin Creek Strike’ in West Virginia. Jones was arrested during the strike, which had turned violent, and was accused of conspiring to murder. She was sentenced to 20 years in the state penitentiary.
Continue Reading Below
Jones was released in 3 months and she went to Colorado to help the miners organize a strike. She again went to the prison for a few months but met with the head of the Rockefeller family, who brought reforms in the mines in 1914.
In 1924, she was prosecuted again on the charges of libel, slander and sedition but nothing came of it. Her last strike appearance was in Chicago; she supported the dressmakers’ strike. By now, she had turned old and could not do much.
She came out with her autobiography, ‘The Autobiography of Mother Jones’ in 1925, in which she talked in detail about her experiences in the labor movement and the ideologies that she believed in and fought for. 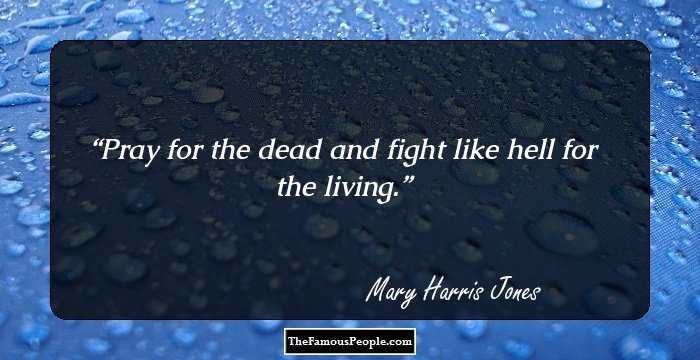 Quotes: Like, Living
Personal Life & Legacy
Jones got married to George Jones, an iron worker and strong union supporter, in 1861 and had four children with him. She lost her husband and all the children to the yellow fever epidemic in Memphis, Tennessee.
In 1930, she celebrated her self-proclaimed 100th birthday. She was living with her friends Walter and Lillie May Burgess in Adelphi, Maryland, and died in the same year. She is buried in the Union Miners Cemetery, Illinois.
Trivia
Jones strongly opposed abortion and female suffrage. She believed that women should not take an active role in politics or for that matter work in factories and mines because their primary duty is to look after the children at home.
She used to refer to the miners who died in the Battle of Virden in 1898 as ‘her boys’.
The famous quote by Jones is “Pray for the dead and fight like hell for the living”.
A magazine named after her ‘Mother Jones’ was started in 1970 and became the largest selling underground magazine of the decade.
There is a school named after her in Adelphi, Maryland, where she spent the last few years of her life, ‘Mary Harris “Mother” Jones Elementary School’. 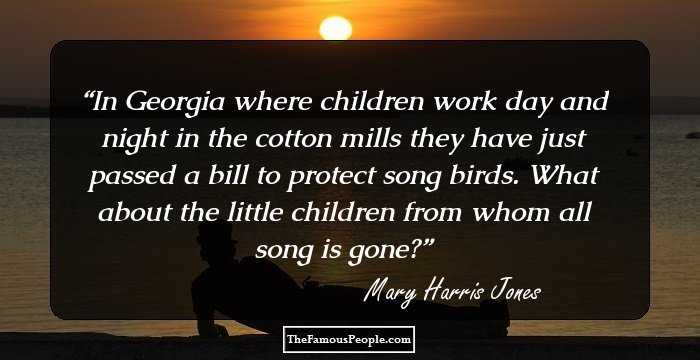