(One of Ireland's Greatest Film Actors)

Richard St John Harris, popularly known as Richard Harris, was an Irish actor, singer, director, producer, and writer. He is known for the variety of roles that he portrayed in his extensive entertainment career. Some of his popular roles include ‘Frank Machin’ in ‘This Sporting Life,’ ‘King Arthur’ in ‘Camelot,’ ‘John Morgan’ in ‘A Man Called Horse,’  ‘English Bob’ in ‘Unforgiven,’ ‘Marcus Aurelius’ in ‘Gladiator,’ and ‘Albus Dumbledore’ in the first two movies of the ‘Harry Potter’ series. Harris started his creative journey when he shifted from Ireland to London where he studied performing arts. After working in different theater productions, he got a chance to act in Hollywood movies. ‘This Sporting Life’ in 1963 is considered to be his breakthrough as well as the most prominent movie of his career. Harris also worked in some made-for-TV movies. He released many albums as he was also a singer of distinctive talent. He won many accolades, including ‘Golden Globe Award’ for ‘Best Motion Picture Actor (Musical/Comedy)’ for ‘Camelot,’ ‘Best Actor Award’ at the 1963 ‘Cannes Film Festival’ for ‘This Sporting Life,’ and ‘Grammy Award’ for ‘Best Spoken Word Recording’ for ‘Jonathan Livingston Seagull.’ Cause of Death: Hodgkin Lymphoma

Richard Harris was born on 1 October 1930, in Limerick, Irish Free State, to Ivan John Harris and Mildred Josephine Harris. He and his siblings, Patrick Ivan, Noel William Michael, Diarmid Dermot, and William George Harris, were brought up in a middle class household.

He attended ‘Crescent College’ and was considered to be a brilliant rugby player; he played at many ‘Munster Junior’ and ‘Senior Cups’ for his school team. Unfortunately, his sports career was cut short after contracting tuberculosis.

He read voraciously for two years while he was recuperating from TB, and his ambitions changed after that. He decided that he wanted a career in arts and moved to England where he enrolled at the ‘London Academy of Music and Dramatic Art’ in 1956.

After completing his studies, Harris joined Joan Littlewood’s Theatre Workshop and started acting in West End Theater productions like ‘The Quare Fellow’ (1956). He spent many years in England, working in various theater productions. 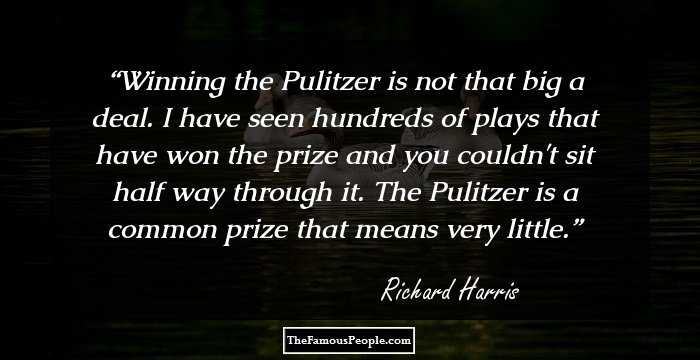 Harris made his debut with 1959’s ‘Alive and Kicking,’ after which he started getting roles in a number of major motion pictures. He appeared in the World War II action adventure ‘The Guns of Navarone.’ He then appeared in ‘Mutiny on the Bounty.’

His first major movie was ‘This Sporting Life’ in 1963 in which he portrayed the role of a coal miner-turned-famous rugby player. He earned the ‘Best Actor’ award at the ‘Cannes Film Festival’ for the movie.

‘Camelot’ (1967), in which he played the role of ‘King Arthur,’ did not do well commercially. Subsequently, Harris bought the rights to the show and staged ‘Camelot’ many times throughout his career, which proved to be a success.

Harris managed to impress the critics and his fans alike with ‘A Man Called Horse’ in 1970, in which he played the role of an English noble who gets captured by Native Americans.

In 1971, he appeared in a BBC TV film adaptation of ‘The Snow Goose.’ Its screenplay by Paul Gallico won a ‘Golden Globe’ award for ‘Best Movie made for Television.’ It was also nominated for a ‘BAFTA’ and ‘Emmy Award.’

In 1973, Harris got his book of poetry published under the title ‘I, In the Membership of My Days.’ The book was later re-released in an audio LP format, with added self-written songs like ‘I Don’t Know.’

He announced his retirement in the 1980s, but his retirement was only transitory. He starred in ‘The Field’ in 1990, in which he played a farmer who fights to keep his family’s lands. He followed it up with Clint Eastwood’s western film ‘Unforgiven’ (1992).

Later, he appeared in movies like Kevin Reynolds’ ‘The Count Of Monte Cristo’ (2002), ‘Kaena: The Prophecy’ (2003), etc. He also played the supporting role of ‘Albus Dumbledore’ in the first two ‘Harry Potter’ films. 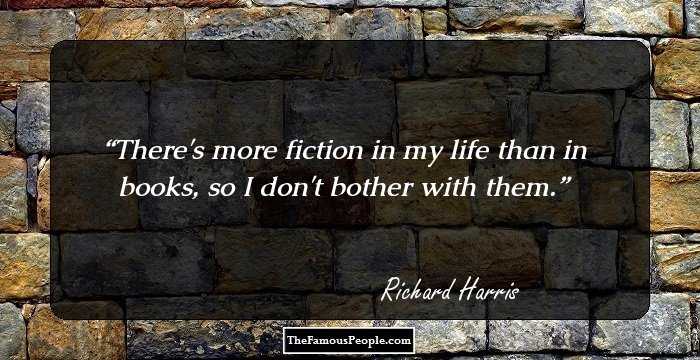 His portrayal of ‘Frank Machin’ in ‘This Supporting Life’ (1963) is considered to be the most significant work of his career. It was his first starring role and he won the ‘Best Actor Award’ at ‘Cannes Film Festival.’

Harris won many accolades for his acting skills. These accolades include ‘Golden Globe Award’ for ‘Best Motion Picture Actor (Musical/Comedy)’ for ‘Camelot,’ ‘Best Actor Award’ at the 1963 ‘Cannes Film Festival’ for ‘This Sporting Life,’ and ‘Grammy Award’ for ‘Best Spoken Word Recording’ for ‘Jonathan Livingston Seagull.’ 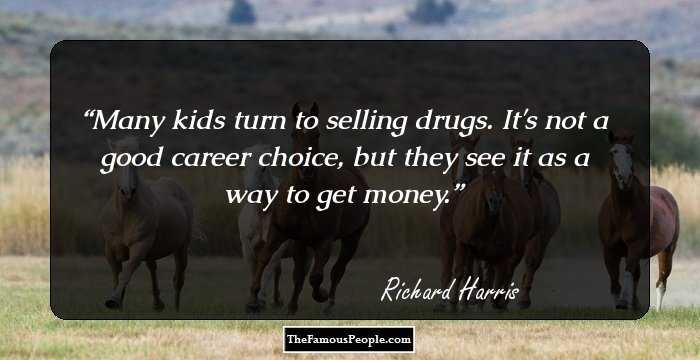 Harris married Elizabeth Rees-Williams, the daughter of David Rees-Williams, 1st Baron Ogmore, in 1957. The couple had three children: Jared Harris, Jamie Harris, and Damian Harris. They got divorced in 1969.

He then got married to the American actress Ann Turkel in 1974, but this marriage also ended in divorce in 1982.

He died at the ‘University College Hospital,’ London, on 25 October 2002, aged 72. His mortal remains were cremated and the ashes were scattered in the Bahamas.

He was an alcoholic, but became a teetotaler in 1981.

He almost died of cocaine overdose in 1978.

This actor died two-and-a-half weeks before the American premiere of his movie ‘Harry Potter and the Chamber of Secrets.’

He was a member of the ‘Roman Catholic Knights of Malta,’ and was knighted by the Queen of Denmark in 1985.

At the 2009 BAFTAs, Mickey Rourke dedicated his ‘Best Actor’ award to Harris.

He was diagnosed with Hodgkin's disease in 2002.

See the events in life of Richard Harris in Chronological Order