(Lauded as the 'Greatest Humorist' the United States Has Produced)

Mark Twain was an American author, essayist, and humorist who wrote a series of famous books, including ‘The Adventures of Tom Sawyer’ and ‘The Adventures of Huckleberry Finn.’ Hailed as "the father of American literature" by William Faulkner, Twain was known for not just his humorous writings and satire but also his radical views on imperialism, organized religion, and civil rights. He was a very popular figure and was friends with the presidents, prominent industrialists, and even the European royalty. Born into a humble family in Missouri, he endured a difficult childhood. The untimely death of his father in 1847 forced the 11-year-old Twain to take up a job to support his family. His early struggles instilled in him sympathy for the working class. As a young man, he was appointed as a river pilot's apprentice, eventually becoming a licensed river pilot. He began his writing career during the ‘Civil War.’ The success of his story ‘The Celebrated Jumping Frog of Calaveras County’ earned him national recognition, paving the way for a successful writing career. Thanks to his popularity, he was also a much sought after speaker. Mark Twain was born Samuel Langhorne Clemens on November 30, 1835, in Florida, Missouri, USA, to Jane (née Lampton) and John Marshall Clemens. He was one of the couple’s seven children, but only three of his siblings survived childhood. He was of Scots-Irish, English, and Cornish ancestry.

His father, an attorney and judge, died of pneumonia in 1847. After his father’s death, the family faced financial crisis. Mark Twain, who was 11 years old, dropped out of school to become a printer's apprentice.

He began working as a typesetter in 1851 and occasionally contributed articles and humorous sketches to the ‘Hannibal Journal,’ a newspaper owned by his brother Orion. 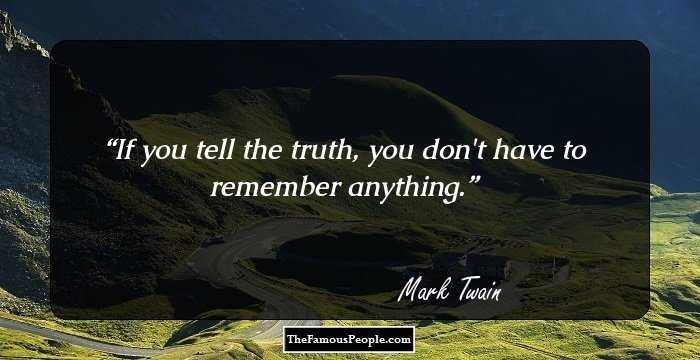 He left the ‘Hannibal Journal’ at the age of 18 and began working as a printer in New York City. During this time, he frequented public libraries and read voraciously in order to educate himself

His fondest childhood dream was to become a steamboatman. Hence, he was elated when steamboat pilot Horace E. Bixby took him as an apprentice and trained him in navigation. After more than two years of rigorous training, Clemens became a licensed river pilot in 1858.

Although he loved his job, the outbreak of the ‘Civil War’ in 1861 brought a standstill to the river trade and he was forced to take up an alternative occupation.

He struggled to re-establish himself and became a miner. However, this occupation did not suit him and he started to write for newspapers. During this time, Samuel Langhorne Clemens adopted the pen name of ‘Mark Twain,’ a term for ‘12 feet of water’ in steamboat slang.

He first tasted success as a writer in 1865 when his humorous story ‘The Celebrated Jumping Frog of Calaveras County’ was published in a New York weekly, ‘The Saturday Press.’ The story brought him national attention and laid the foundation for his successful career as a writer.

Over the next few years, he published several other popular works. In 1876, he published ‘The Adventures of Tom Sawyer,’ a novel about a young boy growing up along the Mississippi River. The book, with its heartwarming theme of a young boy and his adventures, was a resounding success.

In 1881, Twain published the novel ‘The Prince and the Pauper,’ his first attempt at historical fiction. Set in 1537, it narrates the story of two young boys who are identical in appearance: Tom, a pauper, and Prince Edward, the son of a king.

His novel ‘The Adventures of Huckleberry Finn,’ published in 1884, cemented his reputation as an author of international acclaim. A sequel to ‘The Adventures of Tom Sawyer,’ this book is noted for its scathing satire on entrenched attitudes, particularly racism.

Mark Twain earned a large amount of money from his books which he invested in several business ventures. Unfortunately, many of his ventures failed, leaving him in financial difficulties. In order to stave off bankruptcy, he began writing more frequently in the early-1890s which affected the quality of his works.

Unable to cope with the increasing financial pressures, he filed for bankruptcy in 1894. His friend and financier Henry Huttleston Rogers came to his aid and helped him to re-stabilize himself financially.

A very popular person, Twain was a much sought after speaker. He performed solo humorous talks and gave speeches in men’s clubs. A staunch anti-imperialist, he was made the vice-president of the ‘American Anti-Imperialist League’ in 1901. He also supported civil rights and women’s suffrage. 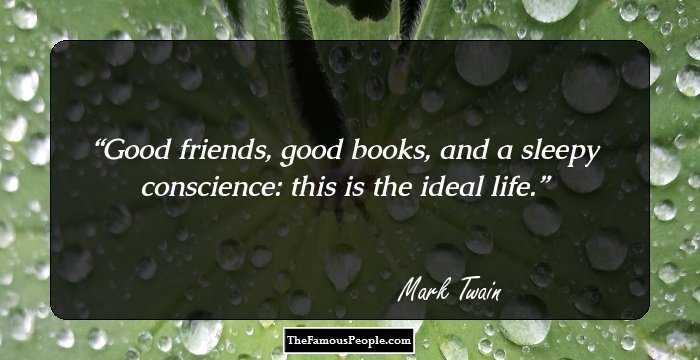 One of Mark Twain’s most popular works is his novel ‘The Adventures of Tom Sawyer,’ a story about the boyhood adventures of two friends, Tom Sawyer and Huckleberry Finn. The book inspired several stage, television, and film adaptations.

His novel ‘The Adventures of Huckleberry Finn,’ a sequel to ‘The Adventures of Tom Sawyer,’ is often named among the ‘Great American Novels.’ The book, which explores notions of race and identity, is both controversial and extremely popular.

Twain’s first attempt at historical fiction, ‘The Prince and the Pauper,’ is also one of his most popular works. Set in the mid-16th century England, it narrates the tale of two young boys who are identical in appearance, but born into two entirely different social classes. The story has inspired numerous theatrical production and films.

In 1901, the ‘Yale University’ awarded him an honorary Doctor of Letters degree. 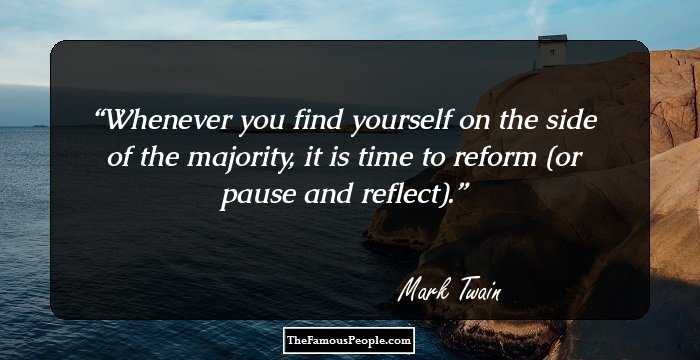 While working as a steamboatman, Mark Twain met Charles Langdon who showed him a picture of his sister Olivia. Twain began corresponding with Olivia and proposed marriage to her.

The couple married in 1870 and had four children, of whom one died in childhood. He loved his wife and was shattered when she died in 1904 after 34 years of marriage.

Twain’s later years were marked by personal tragedies—in addition to his wife, two of his three surviving children also predeceased him. The last decade of his life was a very difficult one, and he was plagued by depression. He died of heart attack on April 21, 1910, at the age of 74.

Trivia
This great American author was born shortly after a visit by Halley's Comet in 1835 and died the day after the comet returned in 1910.
Recommended Lists:
Writers #10
Media Personalities #47

See the events in life of Mark Twain in Chronological Order 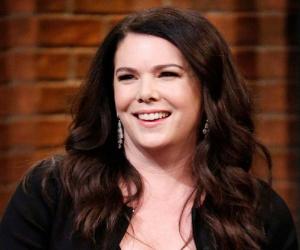